Local News > Skelton-Cline to get $98k for 6-month consultancy

Skelton-Cline to get $98k for 6-month consultancy

END_OF_DOCUMENT_TOKEN_TO_BE_REPLACED 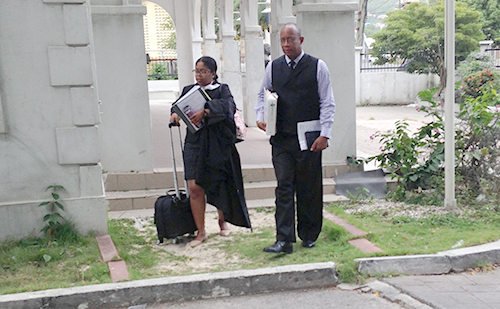 Former BVI Ports Authority Managing Director Claude Skelton-Cline exits court in 2018. Mr. Skelton-Cline filed a lawsuit against government in 2016 because the Cabinet had not agreed to renew his contract. (Photo: KEN SILVA)

The government will pay Claude Skelton-Cline’s firm Grace Consultants $98,000 over a six-month period for wide-ranging services related to a renewable energy unit, negotiations with telecommunications providers, small business assistance, the Prospect Reef site, and other projects, according to a press release issued Tuesday.

Mr. Skelton-Cline — who has previously drawn strong criticism for his involvement with other public projects — will provide “strategic advice on the creation of a climate resilience and renewable energy unit, and advice on projects linked to climate resilience,” according to the press release.

The statement added that Grace Consultants will monitor a programme to provide 1,000 jobs in 1,000 days by assisting small business and implementing youth empowerment initiatives.

The company will also lead upcoming negotiations for new terms of service with telecoms providers, the development of the Prospect Reef site, and new cruise line berthing agreements.

In addition, it will execute a seaplane tour excursion initiative and serve as chair of the Cruise Tourism Committee.

In recent years, Mr. Skelton-Cline has strongly defended his record even as he has found himself at the centre of controversies.

The former managing director of the BVI Ports Authority, Mr. Skelton-Cline sued the government in 2016 because the Cabinet had not chosen to renew his contract.

The results of that lawsuit have not been publicly disclosed, and attempts to find more information at the High Court Registry were unsuccessful.

At the BVIPA, Mr. Skelton-Cline oversaw the development of the Tortola Pier Park, which government leaders hailed as a success but which drew criticism for cost overruns of more than $30 million and missed construction target dates that resulted in lost tax revenue.

A government-contracted review released in January found that the BVIPA repeatedly violated its own procurement procedures, which themselves did not fully accord with the law, and failed to produce many of the documents that the reviewers requested.

Before that, Mr. Skelton-Cline also drew criticism for a perceived lack of transparency surrounding how he spent nearly $600,000 in public money that another of his consultancies received in 2009 and 2010 to implement a programme called the Neighbourhood Partnership Project.

That effort, which detractors said showed few results, was associated with the Ministry of Education and Culture, which at the time was led by now-Premier Andrew Fahie.

On Tuesday, Mr. Skelton-Cline declined to comment on his consultancy contract or on his lawsuit with government.