Crawford Sabaroche, a 53-year-old Dominica national charged with illegal entry and smuggling after police arrested him and ten Haitian migrants, has been remanded to Her Majesty’s Prison while he seeks …

END_OF_DOCUMENT_TOKEN_TO_BE_REPLACED 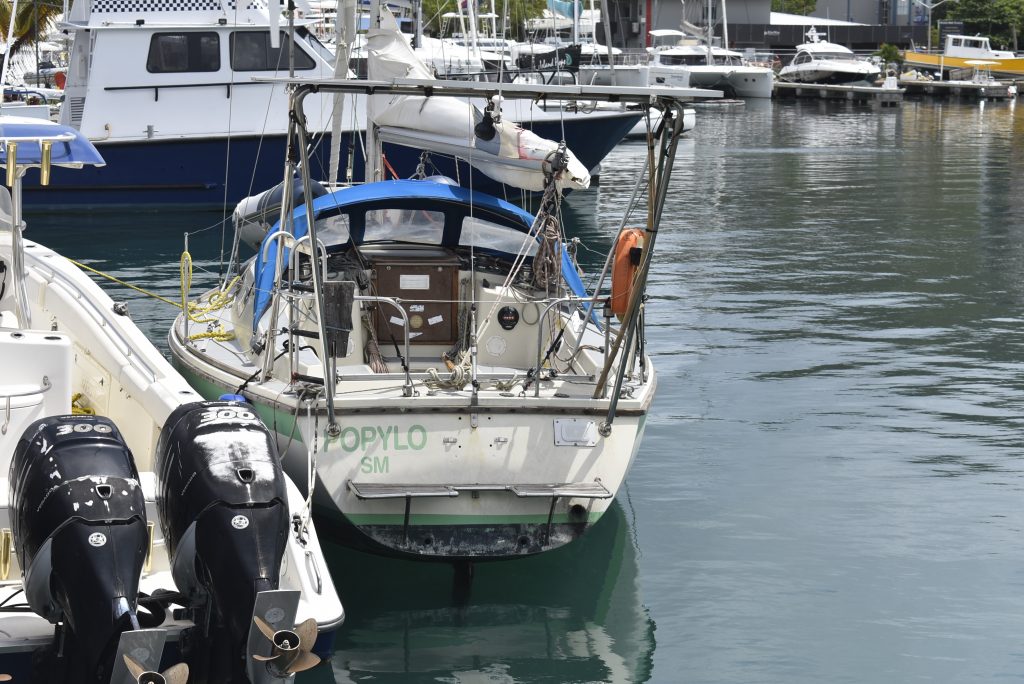 Crawford Sabaroche, a 53-year-old Dominica national, was alleged to have brought Haitian migrants into the territory on his boat, the Popylo SM. (Photo: JOEY WALDINGER)

Crawford Sabaroche, a 53-year-old Dominica national charged with illegal entry and smuggling after police arrested him and ten Haitian migrants, has been remanded to Her Majesty’s Prison while he seeks legal assistance ahead of his next court date on July 23, Magistrate Christilyn Benjamin ruled last Thursday.

During a hearing that day, Crown Counsel Melissa Brewley also laid out the charges against Mr. Sabaroche, revealing new details about the case against the St. Maarten resident.

On June 25, when police officers with a multi-agency taskforce boarded Mr. Sabaroche’s boat after receiving a tip that backpack-wearing passengers had disembarked from that vessel onto Prickly Pear Island, he claimed that he had been drifting through the ocean after experiencing engine problems near St. Barts on June 23, Ms. Brewley alleged.

Asked whether he knew that the Virgin Islands’ borders were closed due to the coronavirus pandemic, Mr. Sabaroche replied in the negative, according to the prosecutor.

In response to further questioning by police, Mr. Sabarochealso claimed that he did not have any passengers aboard his ship and said that he didn’t have permission to enter the territory, Ms. Brewley read.

While Mr. Sabaroche sailed to the marine base at police request, other officers searched Prickly Pear, where they found five men and one woman hiding in a generator room at the Sandbox Beach Bar and Grill, Ms. Brewley said, adding that all of them confirmed they were Haitians.

When a police officer asked the group how they had landed on the island, one said that “ten of them” had hitched a ride from St. Maarten aboard a white yacht, the Crown counsel alleged. “[The Haitian] further stated that there were another four persons further up the hill from where they were,” Ms. Brewley said.

Based on that information, police conducted an additional search of the area while the six individuals were transported to the marine base, the prosecutor explained, though she did not say whether or not police located any additional people that day.

After returning to the marine base, the six Haitians “were later transported to Paradise Suites [Hotel in Road Town], … where the necessary checks were conducted as it relates to their health,” Ms. Brewley alleged, though she did not specify whether they were all tested for Covid-19.

However, Mr. Sabaroche, who had been held at Paradise Suites as well, was allowed into HM Prison last Thursday because he had tested negative for the disease, according to a police officer present at last Thursday’s hearing.

On June 26, the day after Mr. Sabaroche’s arrest, police returned to Prickly Pear to conduct another search of the island, where they found two other migrants hiding out near the Sandbox, Ms. Brewley alleged.

All four detainees identified themselves as Haitians, and were escorted aboard a police vessel back to the marine base, according to the Crown.

“On arriving at [the marine base] these individuals would have identified the white-and-green vessel previously indicated as belonging to the defendant, as the vessel which had transported them from St. Maarten to the territory of the Virgin Islands,” the prosecutor said.

That afternoon Mr. Sabaroche declined to participate in a cautioned interview, as he “wished to obtain legal representation before engaging in an interview,” according to Ms. Brewley.

Last Thursday, Mr. Sabaroche claimed that he didn’t have enough money to pay for a lawyer, so Ms. Benjamin instructed him to apply for expedited legal aid so that he could be adequately represented at his next hearing.

The accused expressed some trepidation about spending time in custody, saying that he doesn’t “want to be a part of no bad-guy business.”

Ms. Benjamin replied, “You go up there good, keep to your-self good, and make sure that you don’t get into any problems, and hopefully no problems will find you.”