Thousands tuned into the virtual soca and calypso showcases this week in the comfort and safety of their own homes, jamming to sounds that represent the Virgin Islands. Both virtual …

END_OF_DOCUMENT_TOKEN_TO_BE_REPLACED 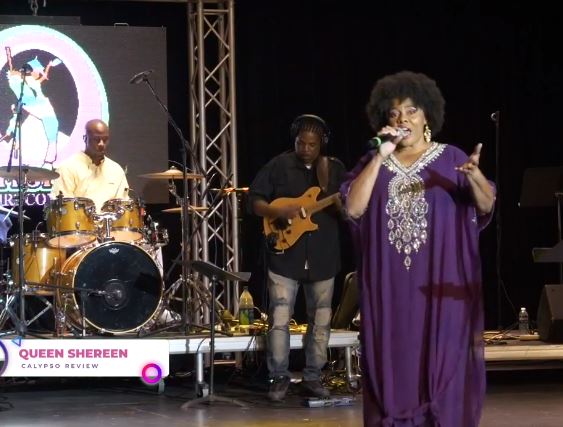 Queen Shereen performed during a virtual calypso showcase on Tuesday night which was aired live on Facebook. (Photo: PROVIDED)

Thousands tuned into the virtual soca and calypso showcases this week in the comfort and safety of their own homes, jamming to sounds that represent the Virgin Islands.

Both virtual events were streamed live on Facebook and were a part of the 66th August Emancipation Festival celebration this year.

Host Masa Pemberton spoke a few words at the start of the Kings and Queens of Calypso Show, explaining the decision to hold a virtual showcase and promising viewers a good lineup of artists.

“Welcome to the 2020 calypso review. Things are a little different right now because of the Covid-19 so you have to bear with us,” he said. “We’re trying to help other countries by showing them, giving them something to emulate, paving the way that our leaders have already done for us, that we could make it this far in putting on a virtual festival.”

More than 7,600 viewers watched the show, which aired on Tuesday night. Miss BVI 2020 Bria Smith performed a short skit, urging the youth to learn the culture of the VI.

For three hours on Monday night, DJ Wiz hosted a virtual Soca Showcase that was streamed live on Facebook by Timeless Media Films.

The show kicked off with a dance performance by the brightly coloured Nouveau Royale dance group. Eight dancers wearing purple-and-yellow outfits brought energy to the stage with their moves, followed by seven younger dancers from the same troupe.

Boss, Chappy and Pascal all performed during the virtual showcase while Xtreme Band played. The video had more than 16,000 viewers, and DJ Wiz announced that 10,000 were watching the live performance online.

Reigning champion Chappy incorporated new songs into his set, including ones that spoke about the coronavirus pandemic while keeping the themes of dancing and having fun.

Disenthral festival troupe ended the night with a performance before DJ Wiz officially wrapped up the evening.