Once, while abroad in Canada, somebody asked Jadienne Webb where she came from. Leaning into her identity and her accent, Ms. Webb said, “I live where you vacay, you escape …

END_OF_DOCUMENT_TOKEN_TO_BE_REPLACED 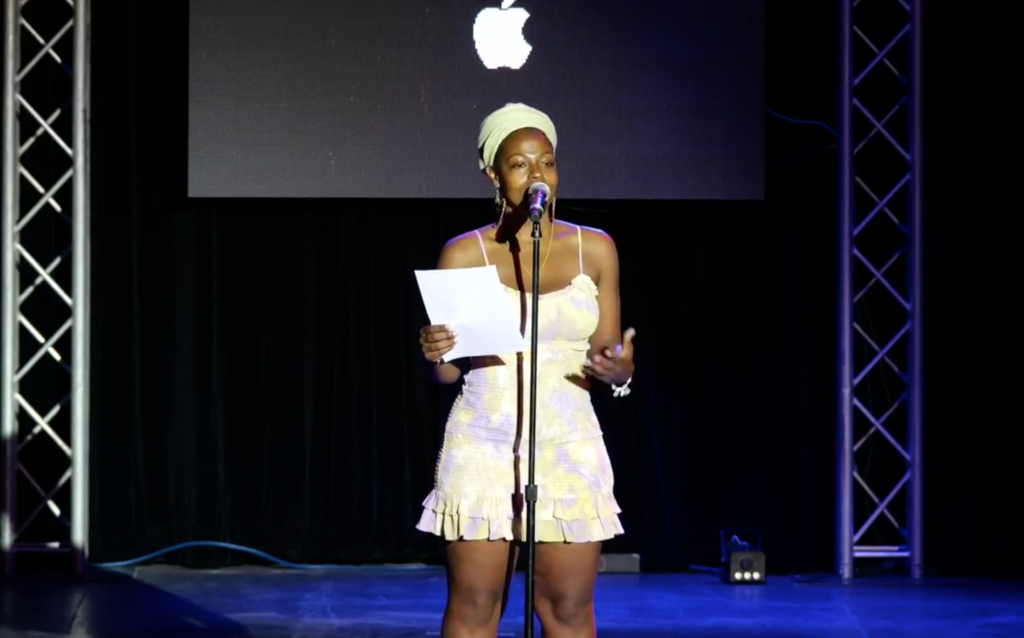 In a break with tradition but in keeping with social distancing requirements, the opening ceremony for the 66th Virgin Islands Emancipation Festival was broadcasted live over Facebook, while hundreds tuned into the watch the poetry slam that streamed soon after. (Photo: JOEY WALDINGER)

Once, while abroad in Canada, somebody asked Jadienne Webb where she came from.

Leaning into her identity and her accent, Ms. Webb said, “I live where you vacay, you escape your cold winters for my home.”

During her performance at Friday night’s poetry slam, which kicked off the 66th annual August Emancipation Festival, Ms. Webbe spoke about how proud she is to be from the Virgin Islands, and how, even during imperfect circumstances, Festival is always a cause for celebration.

Due to the social distancing requirements necessary to keep the coronavirus at bay, festivities this year did not start with the customary torch-lit procession to the Festival Village. Instead, it commenced with the poetry slam, broadcasted live on Facebook, while the virtual opening ceremony was pushed back to Saturday.

Both the opening ceremony and the poetry slam were streamed live on the Virgin Islands Festival Facebook page, where residents can tune in to watch all online events during the next two weeks.

VI poet April Glasgow hosted the poetry slam, while a panel of judges — including Dr. Richard Georges, H. Lavity Stoutt Community College acting president, whose most recent poetry collection was awarded the most prestigious literary prize in the Caribbean — were tasked with deciding who would win first, second and third place, which came with cash prizes of $1,000, $500, and $250, respectively.

Keeping with the theme of emancipation, Ms. Webbe was not the only poet who wrote about her cultural pride.

“Curly hair, I didn’t care. When I was young I was very fond of the very roots that scared a generation of cowardly hair that feared my nation, because they hadn’t the intelligence or the communication to rise and prosper without subjugation,” said Helina Hewlett, as more than 100 people watched along on Facebook, where hearts and smiley-faces floated to the top of the screen.

While a jovial spirit was maintained throughout the evening, with Ms. Glasgow and the contestants often joking with one another as they walked on and off the stage, and a young Amani Brown playing a steel drum rendition of the Bob Marley classic “Redemption Song,” other poems probed at the racism and oppression that black people continue to face across the world, and how much more work is needed to undo these harms.

Reciting from memory with his eyes closed, Kamal Lettsome said, “Emancipation has got to be more than just a yearly stop by the slave ship we’re allowed to disembark for a few days, dance, eat, drink and call that freedom.”

Correction: A previous version of this article incorrectly stated when the virtual opening ceremony was streamed.