Roughly a year after a Maryland solar developer named Rob Wallace announced that he had inked a memorandum of understanding with H. Lavity Stoutt Community College to start a solar …

END_OF_DOCUMENT_TOKEN_TO_BE_REPLACED 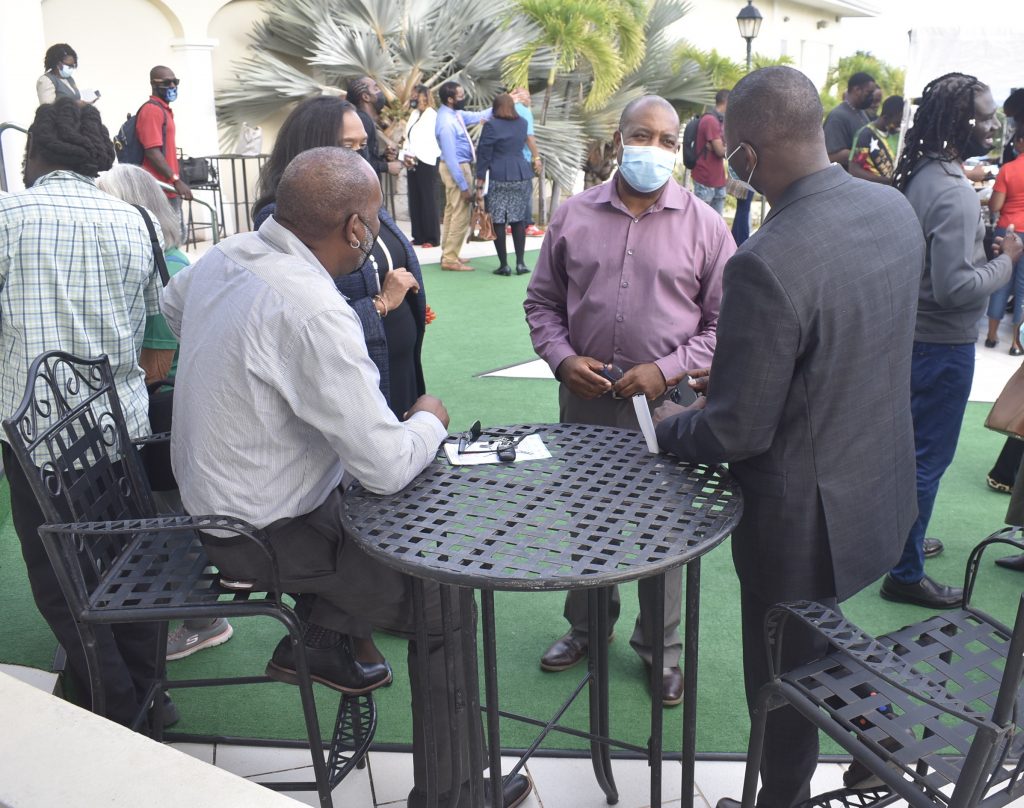 During a reception to celebrate the launch of the solar technician training programme, government ministers mingled with instructors Kellyann Few and Damon Moulden. (Photo: JOEY WALDINGER)

Roughly a year after a Maryland solar developer named Rob Wallace announced that he had inked a memorandum of understanding with H. Lavity Stoutt Community College to start a solar technician training programme called the Power 52 Caribbean Energy Institute, the 42 students enrolled in the first cohort of this programme attended their first class on Monday.

At the end of the 11-week course, graduates should be prepared to sit for an exam administered by the North American Board of Certified Electrical Practitioners, which, if they pass, will qualify them to install solar panels in the Virgin Islands and beyond, officials said.

“This programme will help to transform lives; it will be a source of pride for the participants, who … will have international qualifications,” Deputy Premier Dr. Natalio “Sowande” Wheatley said during a reception celebrating the programme’s commencement.

The initiative is similar to the courses advertised by a Maryland non-profit called Power 52 Foundation, which Mr. Wallace launched with NFL Hall of Famer Ray Lewis.

Although Messrs. Lewis and Wallace visited the territory to announce the MOU last year, neither was present during Monday’s celebration.

This programme is designed to complement the territory’s effort to produce 80 percent of Anegada’s energy through renewable means by 2021, part of a broader set of green energy goals established in 2013 that successive administrations have struggled to accomplish.

During the training programme, students will do fieldwork on a solar grid being developed adjacent to the Anegada power station by Power 52 Clean Energy Access, another company owned by Mr. Wallace, and will also be considered for employment on the project after completing their training, said Natural Resources, Labour and Immigration Minister Vincent Wheatley.

While speaking at the reception, Premier Andrew Fahie said the programme was birthed through a collaboration between his office; the Ministry of Education, Culture, Youth Affairs, Fisheries and Agriculture; and the Unite BVI Foundation, which in July gave the college a $362,000 grant to fund student scholarships.

HLSCC President Dr. Richard Georges said on Monday that the Unite BVI grant had funded full-ride scholarships for 20 of the participants and partially funded scholarships for two others. An additional two students, both of whom work in the electrical inspection unit of the BVI Electricity Corporation, have received scholarship funding from the college as part of the school’s drive to outfit the roof of its Learning Resource Centre with solar panels, Dr. Georges added.

Kelwyn Faulkner Lindsay, a resident of Anegada, enrolled in the programme alongside two of his friends, and all three were pleasantly surprised to learn, upon showing up to the first day of classes, that they were among the students to receive a full-ride scholarship.

“We were all interested in it, inquired in it, made our initial step to try and make our progress, and the government actually surprised us and made it all happen,” Mr. Lindsay said.