Government held the second of its Business Solutions Forums on Tuesday — though any ideas arising from the forums have yet to be revealed to the public. Tuesday’s forum, held …

END_OF_DOCUMENT_TOKEN_TO_BE_REPLACED 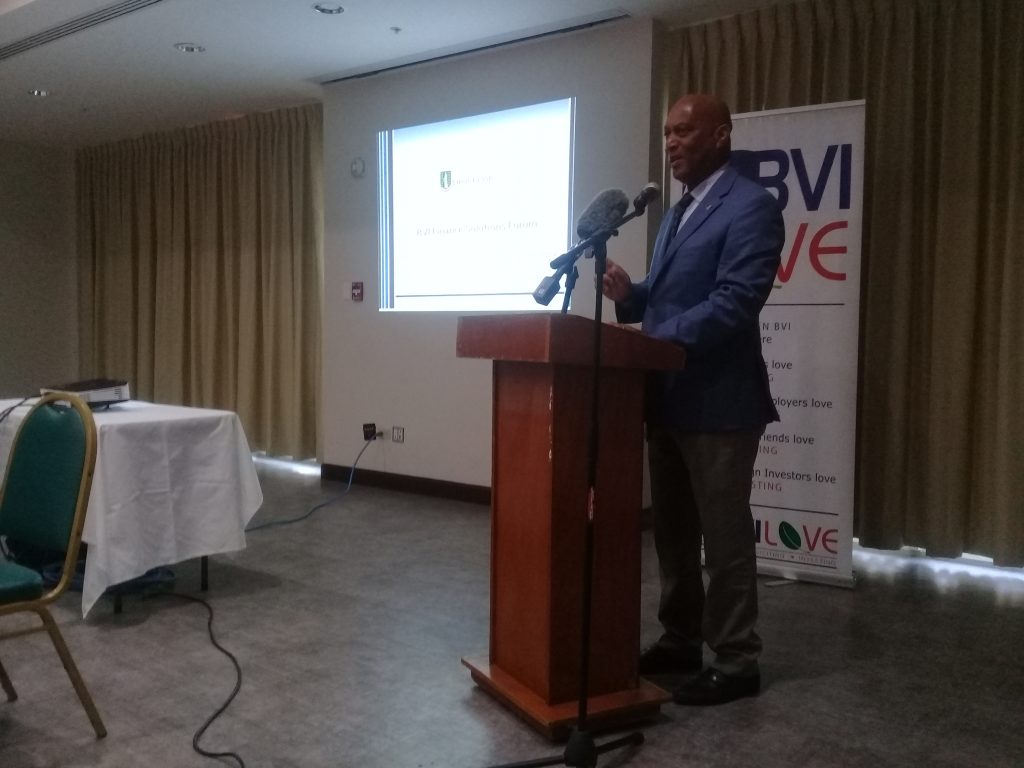 Government held the second of its Business Solutions Forums on Tuesday — though any ideas arising from the forums have yet to be revealed to the public.

Tuesday’s forum, held at Maria’s by the Sea in partnership with BVI Finance, hosted about 80 attendees from the financial services industry.

The media, however, was only invited to attend the open- ing ceremony, which consisted of brief remarks from various officials.

Premier Andrew Fahie, who had been out of the territory on personal leave since last Thursday, had planned to attend the open- ing ceremony but was “delayed,” according to Permanent Secretary Kedrick Malone.

Instead, Natural Resources, Labour and Immigration Minister Vincent Wheatley spoke in his place.

Mr. Wheatley called the topic timely, acknowledging “a steady decline” in the VI’s financial services industry in recent years. The second quarter of 2019, for instance, saw incorporations — seen as a bellwether for the industry as a whole — hit a 16-year low.

Mr. Wheatley said the decline is expected “to continue for a short time to come, [but] by bringing the best minds in the industry here, it’s hopeful we’ll get some kind of solution to stabilise first and grow afterwards.”

He noted that uncertain times call for the industry to diversify, and said he expected the forum would yield both a discussion of problems and “viable solutions to keep this industry alive for a long time to come.”

He added, “Investors like stability: They don’t like uncertainty.” According to Mr. Wheatley, after the opening ceremony, the programme was slated to continue with “updates on what government has done” to support the industry, but the media was asked to leave before that.

The first forum, held in December in partnership with the BVI Chamber of Commerce and Hotel Association, was also closed to the media after the opening ceremony.

Policymakers also announced steps designed to reverse the industry’s decline in 2015, when they commissioned a $1.15 million study from the consulting firm McKinsey & Company to assess the industry.

The firm subsequently recommended 40 reforms, and the then-National Democratic Party government said 10 would be prioritised, including streamlining the territory’s immigration and labour policies, investing in infrastructure, enhancing customer service at the Financial Services Commission, and educating the population on the importance of financial services.

A spokeswoman for BVI Finance did not immediately respond to an enquiry about whether the McKinsey recommendations were considered in the Tuesday forum.

During the ceremony, BVI Finance Chairman Robert Briant said the territory has made strides in cultivating a true public-private partnership.

He added that BVI Finance has had meetings with the departments of Labour and Immigration, and that both he and CEO Elise Donovan sit in on meetings in the Premier’s Office on a weekly or monthly basis.

“Twenty years ago … financial services was frankly run entirely by the [Financial Services Commission],” he said, adding, “Look at it today. The forefront is government.”