Opening a new business in the midst of a global pandemic may seem risky, but entrepreneurs in Sopers Hole, an area that has been recovering steadily from the devastation of …

END_OF_DOCUMENT_TOKEN_TO_BE_REPLACED 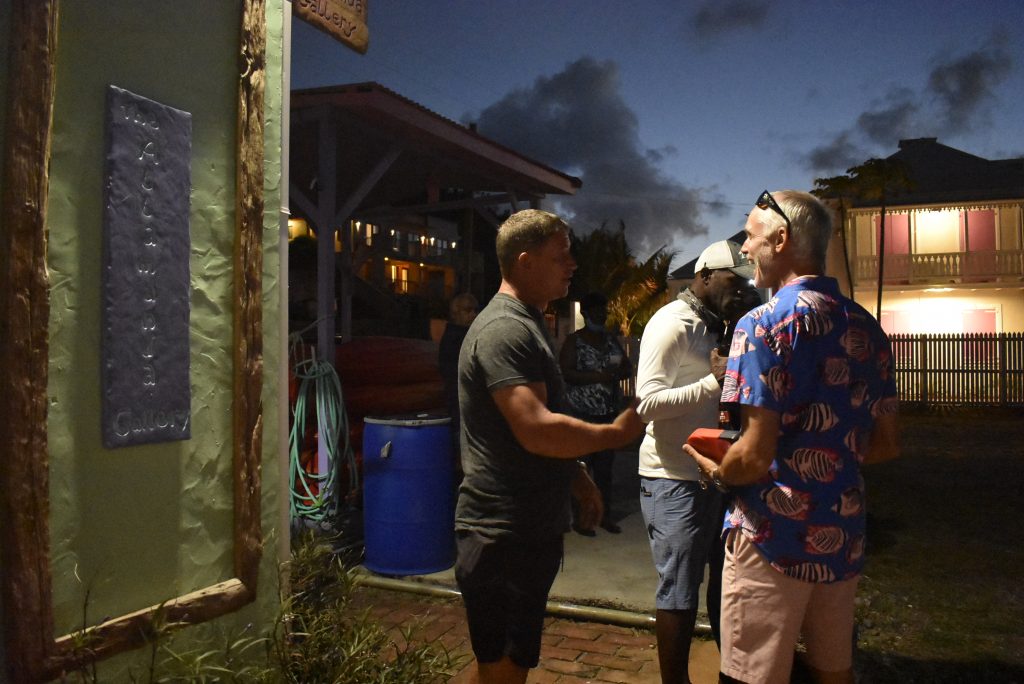 The Allamanda Gallery and Breeze Activewear held a joint grand opening on Saturday at Sopers Hole. Several businesses have opened in the area during the pandemic as the hurricane recovery there continues. (Photo: ZARRIN TASNIM AHMED)

Opening a new business in the midst of a global pandemic may seem risky, but entrepreneurs in Sopers Hole, an area that has been recovering steadily from the devastation of Hurricane Irma figured they had nothing to lose.

At least five new, reopened or relocated businesses have come to Sopers Hole just in the past year, and they are finding new ways to bring foot traffic in lean times.And although border restrictions and the lack of a permanent international ferry terminal are still throwing them curveballs, most feel that the area has nowhere to go but up.

Omar’s Coffee House, a sister business to the nearby Omar’s Fusion, recently started serving up foamy espresso drinks, bagels and healthy breakfast bowls along the waterside.

Co-owner and manager Shakti Zegura said she had been friends with her business partner Omar Hurst for while.

A grand opening last month featuring a morning music set from Jalena & Rene drew in a small but enthusiastic crowd, some of whom spilled over into nearby Arawak and the Rite Way-owned Harbour Market, a full-service super- market that opened in December.

In pandemic times, Ms. Zegura said, she has focused on keeping her price points reasonable.

“Not everybody could reach into their pocket and have a nice meal, so coffee is very affordable: You know, everybody has $5 and $3 to spend on a coffee and have a good time,” she said.

She added that Mr. Hurst eventually wants to expand the space and start roasting and sell- ing his own brand of coffee.
Despite the pandemic-re- lated hardships, now is a great time to be in Sopers Hole, she said.

“I think it’s a great push for the community,” she said. “Having a supermarket brings in more traffic, with families wandering around. There’s limited tourism happening right now with the ports closed and stuff like that. We’re looking forward to the point where tourists are coming in. That’s probably where our financial state will change, but right now it is all about supporting the community and being supported by the community.”

Ms. Baker said she chose to open in Sopers because the area has made the most of recovery since Hurricane Irma.

“There’s still work to be done, but gradually it’s moving along as more and more businesses get open,” she explained. “While it may not have all of the amenities that it had before the hurricane, I think it’s still a great place for people to come. Residents and tourists like to hang out, enjoy the water and the environment.”

Ms. Baker said a permanent ferry terminal is a major factor that will make a difference to boosting business at Sopers. “First of all, it obviously just brings people to watch them in general, because obviously there’s a huge amount of traffic that used to go through the West End ferry terminal,” she explained.
Ms. Segura said it’s taken “a very long time” to complete the ferry terminal, and she would like to see it finished soon.

“If we had a running ferry to and from West End, absolutely [we would have more customers],” she said.

“We’re also looking for ways to get more people from St. Thomas and St. John. At some point, we’ll get back to tourists crossing to Jost Van Dyke and that stuff, but it will just take time.”

Ms. Baker added, “A lot of the tourists that used to come in from St. Thomas very nearly al- ways stopped at Sopers Hole if they were going through the West End ferry terminal: you know, to eat, drink, or go to visit the stores here.”

Before the terminal was destroyed in Hurricane Irma in 2017, it processed nearly a third of non-cruise-ship visitors to the territory, officials have said.

A preliminary plan for a new terminal — the most recent of several proposed under successive administrations for more than a decade — was unveiled in April 2019, but ground has not been broken.

Last July, government announced that it intends to use a portion of the $65 million Caribbean Development Bank recovery loan to build a new terminal, and said it was seeking a consulting firm to design and manage the project over the course of two years.

In the meantime, a temporary structure welcomes guests, but even that facility has been limited largely to the local JVD ferry since the pandemic shut down international ferry arrivals.

Ms. Baker said the continued delay in the seaports reopening to international traffic has also been a big blow, as has the previous marine exclusion zone in West End, which was eased last month to allow boats to pass from Nanny Cay to Sopers.

“People have slightly forgotten about Sopers,”she said. “And so what we’re trying to do is to hopefully have businesses that appeal to residents and have regular events and things going on. Obviously, it’s a boating area and marina, and that has a huge impact on the people that come through here.

“So what we’re trying to do, all the businesses here, is to create a nice place and to encourage local residents to come back down.”