Speaker of the House Julian Willock started last week’s House of Assembly sitting by levelling criticism at the Governor’s Office for not yet assenting to bills already approved by legislators. …

END_OF_DOCUMENT_TOKEN_TO_BE_REPLACED 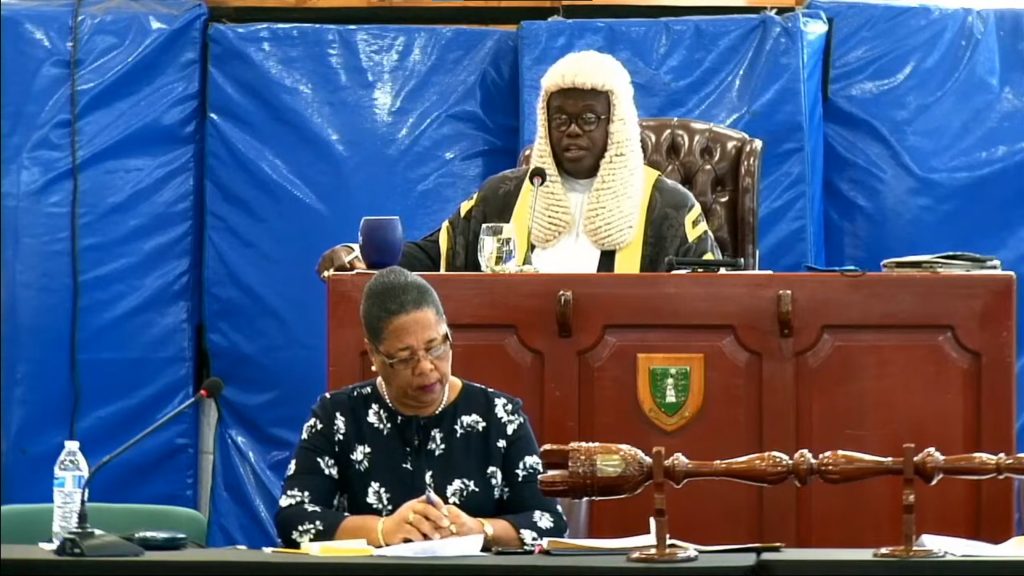 House of Assembly Speaker Julian Willock last week took issue with the governor’s delay in assenting to several bills, one of which was passed in June to legalise medical marijuana in the territory. (Screenshot: HOA YOUTUBE)

Speaker of the House Julian Willock started last week’s House of Assembly sitting by levelling criticism at the Governor’s Office for not yet assenting to bills already approved by legislators.

“As of today, we still have many bills not assented to by the governor,” Mr. Willock said at the start of last Thursday’s sitting. “One such bill was sent since the 30th of June, 2020. In my humble view, this is a threat to our democratic way of life, our House of Assembly as an independent institution, and to the role of the legislature in our Constitution.”

Among the legislation awaiting assent are two bills that would decriminalise and legalise medical marijuana in the territory, which the House passed unanimously last June.

HOA members have urged the current governor and his predecessor to assent to both, arguing that the proposed laws could give a much-needed boost to the territory’s economy and free up policing resources for other matters. However, then-Governor Gus Jaspert did not give his assent before leaving the territory in January, and current Governor John Rankin has not made public any plans to do so.

When faced with criticism for the delayed assent, Mr. Jaspert said United Kingdom Foreign Secretary Dominic Raab would have to make a decision on the bills.

The UK government’s Home Office is the licensing authority for medical narcotics in the Virgin Islands, and the Cannabis Licensing Act 2020 would establish a superseding new authority, he explained.

Other bills are pending as well, including one to guide the territory’s disaster management practices, which passed the House in January.

The proposed law had run into roadblocks since at least 2014, but members approved the revised 114-page bill on Jan. 5. It seeks to establish an updated mechanism for disaster management by outlining ways to mitigate injury and damage caused by hazards; providing authorisation to erect temporary safety structures; and implementing protocols for activating mutual aid agreements, among many other provisions.

The version initially Gazetted also would take certain disaster-related powers away from the governor and give them to the government, legislators said during the debate.

Mr. Rankin did not respond to requests for comment this week about an anticipated timeline for assenting to the outstanding bills.