Two days after the Commission of Inquiry again criticised the government for failing to provide complete information on request, Speaker of the House Julian Willock issued a statement on June …

END_OF_DOCUMENT_TOKEN_TO_BE_REPLACED 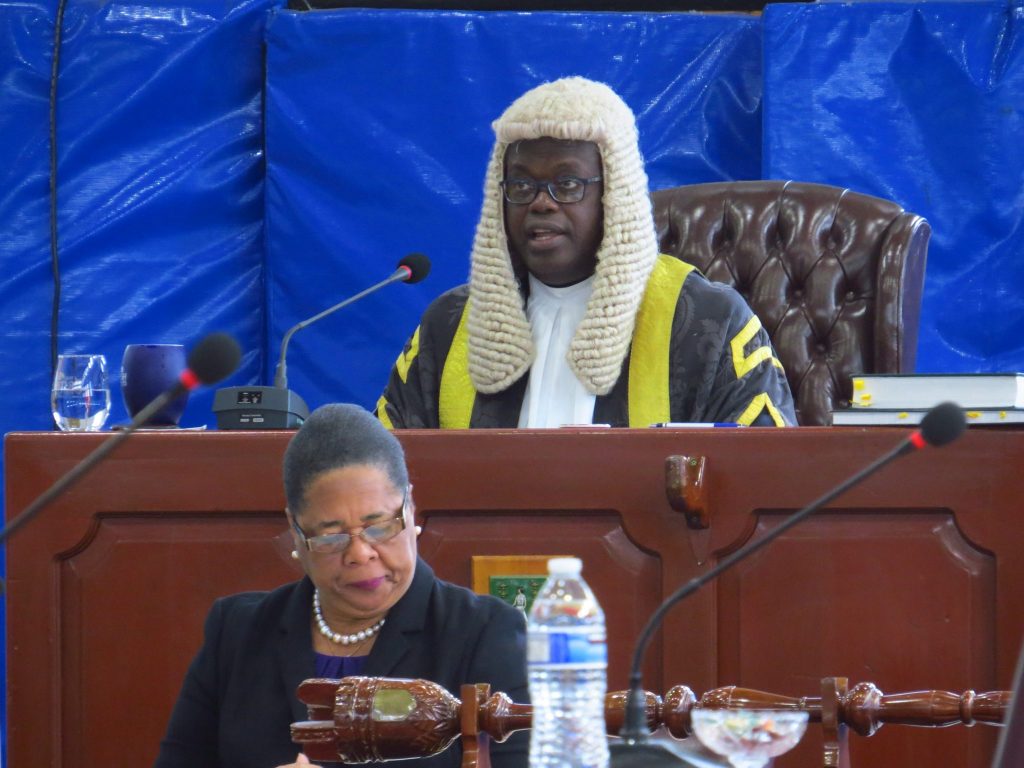 Two days after the Commission of Inquiry again criticised the government for failing to provide complete information on request, Speaker of the House Julian Willock (pictured above) issued a statement on Friday claiming that members of the House of Assembly have been cooperating fully with the body. (Photo: DANA KAMPA)

Two days after the Commission of Inquiry again criticised the government for failing to provide complete information on request, Speaker of the House Julian Willock issued a statement on June 4 claiming that members of the House of Assembly have been cooperating fully with the body.

In his June 2 opening statement at the first live COI hearing, Commissioner Sir Gary Hickinbottom reiterated previous complaints about missing documents, claiming that the issue has slowed his team’s progress.

“Even now, the COI does not have a full set of the relevant documents,” Sir Gary said. “At the hearing on [May 20], Sir Geoffrey Cox QC, on behalf of the attorney general, frankly and properly conceded that the BVI government’s files are in ‘severe disarray,’ and that, he said, largely explained why the documents produced to the COI had been in such very poor order.”

The June 2 criticism followed a month of hearings with senior officials and other witnesses from multiple ministries, the Premier’s Office, the Customs Department, Cabinet, the Immigration Department, the BVI Airports Authority, and the private sector.

The closed-door May hearings largely centred around identifying reports and communications that were not provided pursuant to the original requests the COI issued shortly after it launched in January.

Sir Gary gave late-May deadlines for the witnesses to find any missing documents, but he indicated on June 2 that some were still outstanding.

“That has inevitably had a serious adverse impact on the progress of the COI,” he said. “In particular, it is inevitable that the analysis of documents, and the COI hearings, will be significantly more difficult and take substantially longer.”

He announced that he was therefore seeking an extension to provide his formal report to the governor, which was originally due in mid-July.

Mr. Willock, however, said on June 4 that “despite misleading public information,” all 15 HOA members have been fully abiding by the COI’s requests.

“Reports in the media are inconsistent with facts as it relates to the members of the HOA’s cooperation,” the speaker’s press release claimed without identifying the offending media outlets.

Mr. Willock pointed out that three ministers, including Premier Andrew Fahie, have already appeared before the commission when summoned, and he said other recently summoned ministers would follow suit.

“I am sure members will cooperate as far as practical,” he said.

He added that the House had rushed a legislative amendment to allow the commissioner permission to view documents from the Register of Interests, which details the business interests of elected officials.

He also reiterated that government has provided 85,000 pages of documents to the COI.

Sir Gary said in his opening remarks on June 2 that he was grateful to the public officials for their hard work to provide these documents.

However, he said the initial hearings held last month “confirmed that the documents produced were significantly incomplete and in generally very poor order.”

“Often, it was impossible to ascertain the story that they told,” Sir Gary said.

In response, the COI requested that by May 31 ministers and public officials who have gone back to check for any missing documents swear they have “taken all reasonable steps to ensure that disclosure is complete.”

The commissioner directed Attorney General Dawn Smith to sign an affidavit confirming their assurances by that time, though he later granted her request to extend this deadline to June 7.

The AG and elected officials were also invited to provide “position statements” regarding their views on governance, law enforcement, and the justice system.

Last month, Sir Gary gave a deadline of May 31 to submit the statements, but he said in the June 2 hearing that ministers’ statements had been lodged the day prior.

“These position statements are still being received but, subject to any compelling objection, I propose publishing them on the COI’s website so that the public can better follow our work,” he said.

He did not mention a firm deadline extension. The COI is also requesting “corporate statements” from relevant ministries so they can explain what sort of records they oversee.

“These, I hope and expect, will again ameliorate deficiencies in the documents and will enable more focused hearings going forward,” he said without projecting a deadline for the corporate statements.

The COI also switched to a new system that Sir Gary said would better manage documents supplied to the commission and “reduce the risk that poor or incomplete documents will disrupt future hearings.”

A new series of hearings is scheduled to start on June 14.