After missing at least part of three consecutive sittings of the House of Assembly while awaiting trial in Miami, former premier Andrew Fahie may be in danger of losing his …

END_OF_DOCUMENT_TOKEN_TO_BE_REPLACED 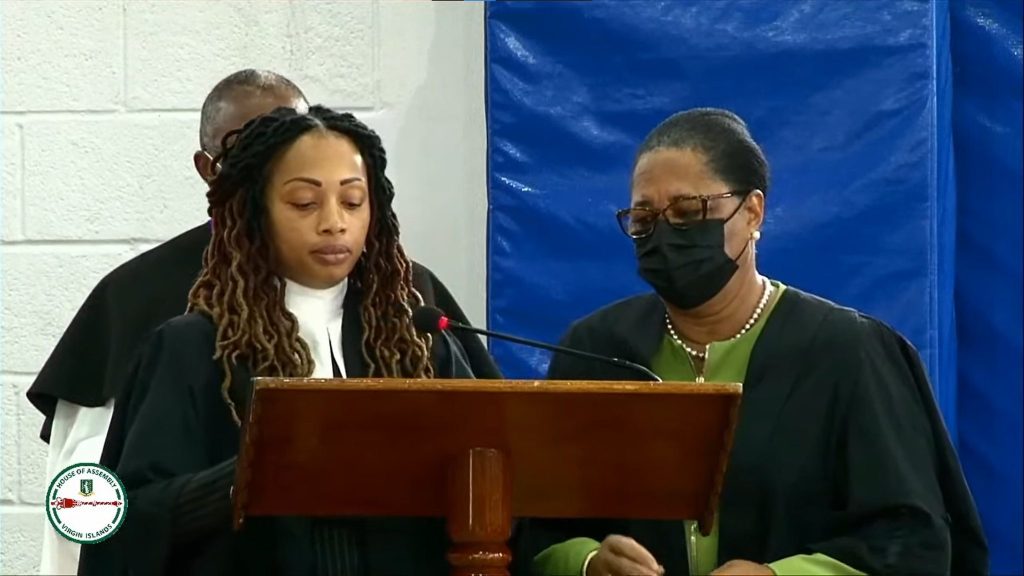 Speaker of the House Corine George-Massicote, who was appointed on May 26, may have to decide whether former premier Andrew Fahie can keep his First District seat in the House of Assembly while on house arrest in Miami. (File screenshot: HOUSE OF ASSEMBLY)

After missing at least part of three consecutive sittings of the House of Assembly while awaiting trial in Miami, former premier Andrew Fahie may be in danger of losing his District One seat. However, the rules that govern his potential removal are ambiguous, and newly appointed Speaker of the House Corine George-Massicote — who now appears to hold the key to his future in the HOA — didn’t respond to requests for comment this week.

Mr. Fahie is currently on house arrest in Miami following his April 28 arrest on drug and money-laundering conspiracy charges.

On May 5, HOA members unanimously passed a no-confidence resolution calling to revoke his appointment as premier. Then-Deputy Premier Dr. Natalio “Sowande” Wheatley said at the time that Mr. Fahie had “lost the moral authority to lead the Virgin Islands.”

Dr. Wheatley then replaced him as premier and minister of finance, but Mr. Fahie retained his seat in the House as the District One representative.

However, the Constitution requires an elected HOA member to vacate their seat if absent “for such period and in such circumstances as may be prescribed” by the HOA’s Standing Orders.

The Standing Orders, in turn, state, “A member of the House shall vacate his seat if the member in any one session is absent from the House for more than three consecutive sittings without the written leave of the speaker.”

Since his arrest, Mr. Fahie has not attended the HOA. This means he has missed parts of two multi-day sittings and the entirety of a third — all during the HOA’s fourth session.

The Standing Orders, however, do not specify if a member must miss more than three full sittings or only three partial sittings in order to be considered “absent” for “more than three consecutive sittings” under the removal provision.

It is also unclear if Mr. Fahie has received permission from the speaker or her predecessor.

On May 3, the week after Mr. Fahie’s arrest, the House continued the current session’s second sitting, which Mr. Fahie previously attended on March 10. The third sitting — which Mr. Fahie missed in its entirety — started on May 26.

The fourth began on June 30 and was scheduled to continue on July 14.

At the June 30 sitting, Ms. George-Massicote said Mr. Fahie gave a notice of absence, but she did not say whether she had given him written leave or planned to do so.

Besides absences, HOA members can also be removed for other reasons: if they resign, for instance, or if they become disqualified for election because of bankruptcy, unsoundness of mind, facing a death sentence, or violating an offence related to election laws.

They do, however, have the right to appeal.

Though Mr. Fahie’s house arrest precludes in-person attendance at the HOA, he could potentially request to attend remotely.

The HOA has met virtually multiple times during the pandemic, including when several members tested positive for Covid-19.

However, Dr. Wheatley said last month that Mr. Fahie had not reached out to him about attending remotely. He has also said that Mr. Fahie should concentrate on his defence.

The decision on whether to allow Mr. Fahie to appear remotely may also fall to Ms. George-Massicote, who is relatively new to her position.

The House accepted her predecessor Julian Willock’s resignation on May 3, and then selected her as his replacement on May 26.

The Governor’s Office has declined to comment on Mr. Fahie’s seat, directing queries to the government. Attempts to reach Mr. Fahie in recent weeks have not been successful.