Early in his Friday hearing before the Commission of Inquiry, Speaker of the House Julian Willock categorically denied breaching the Register of Interests Act, 2006, which requires House of Assembly …

END_OF_DOCUMENT_TOKEN_TO_BE_REPLACED 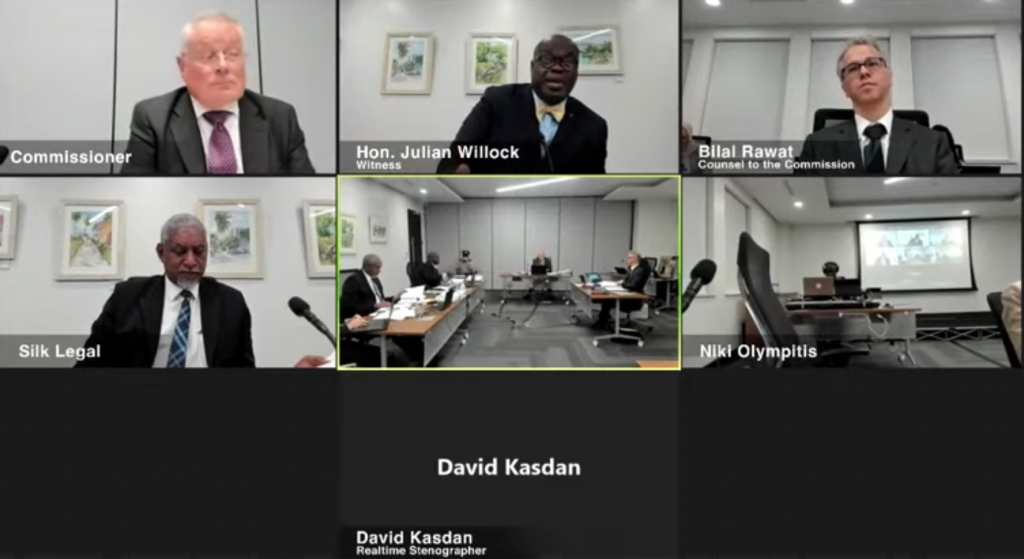 Speaker of the House Julian Willock argued with Sir Gary Hickinbottom and his team on Friday during a hearing that had been rescheduled after Mr. Willock skipped a previous session on June 14. (SCREENSHOT: COI/YOUTUBE)

Early in his Friday hearing before the Commission of Inquiry, Speaker of the House Julian Willock categorically denied breaching the Register of Interests Act, 2006, which requires House of Assembly members to declare their interests annually.

But when confronted with his filings shortly thereafter, he admitted that he appeared to have breached it after all.

This week, however, he reverted back to his original position, telling the Beacon yesterday that he plans to return to the COI on Monday to present “bombshell evidence” that “there has been no breach.”

During a contentious appearance that took place after he missed his first scheduled hearing on June 14, he repeatedly criticised the commission, interrupted the flow of questioning, argued with Commissioner Sir Gary Hickinbottom, and cast doubt on the veracity
of the presented documents, all while repeating the words “transparent” or “transparency” eight times in the course of his interview.

At the start of the hearing, Counsel Bilal Rawat announced that Mr. Willock had asked to be addressed by the term “honourable speaker”
throughout the interview.

Sir Gary quickly agreed, and the speaker then asked to read a short statement.

The commissioner hesitated but agreed after Mr. Willock assured him that it would help the commission. The speaker then read, “While I would have preferred not to be here, I have been summoned. Therefore, I have complied.”

He added that he objected to the way the commissioner had approached him.

When he finished, Sir Gary replied, “I didn’t find that helpful, nor is it factually accurate.”

He added that he had agreed to meet anywhere besides the HOA office  as the speaker had suggested.

The Friday hearing followed multiple attempts to reschedule on Mr. Willock’s part after he missed a June 14 hearing, prompting the commissioner to declare him to be in “willful default” of his summons by the COI.

Instead, Mr. Willock attended a Commonwealth Parliamentary Association training session that day, where he railed against the United
Kingdom and called the COI an unconstitutional “colonial relic.”

After rescheduling his appearance for Friday through his lawyers, he then attempted to reschedule again for Monday via an email sent to the commission on June 15. However, his lawyer Richard Rowe confirmed the next morning that his client would appear at noon on Friday as scheduled.

About an hour before his scheduled appearance, the speaker issued a press release stating that since the House of Assembly sitting the previous day had been adjourned and his “next parliamentary activity” was scheduled for Monday, he would attend to “find out on what basis I have been summoned and hope to learn more about what this Commission of Inquiry is all about.”

During Friday’s hearing, Sir Gary questioned the speaker about the Register of Interests Act, which was a major theme of the COI hearings last week, asking his opinion on whether the register should be public.

Mr. Willock quibbled with the meaning of “public” and  suggested that the register is already “public” in a sense.

“It could be open to the  public because you have access to it,” he said.

“I’m sorry, that seems to be a legal point,” said the  commissioner.

“Quite,” observed Sir Gary, suggesting that Mr. Rowe could make any legal points needed. Questioned by the COI team about his responsibilities under the ROI Act, Mr. Willock responded by saying repeatedly, “I have complied with the law” and insisting that he had filed his three required filings on time.

However, the commissioner later asserted that copies of his declarations showed that he was in fact in breach of Section Three and Section Seven of the act for all three years he was in office. The first section sets a deadline for complying on the due date and the second sets a separate deadline of three months later.

While eventually admitting that he appeared to have been late, Mr. Willock nevertheless cast doubt on the accuracy of the documents the commissioner showed him, claiming at one point that his secretary may have filled out the forms.

“Maybe that’s the handwriting of my secretary, because I usually ask her to print off the form as I sit with her and go through it,” he said. “Again, I’m not going to assume anything. You have presented the document to me; first time I’m seeing this document. You’re claiming it’s from the register of interests.”

“Because the 18th of March is after the 12th of March,” the commissioner replied.

However, Mr. Rawat said the evidence showed that the registrar did not receive the form until Aug. 11, 2020, which would mean Mr. Willock missed deadlines for both Section Three and Section Seven.

Subsequently, the commissioner added that his declaration due on March 12, 2019, was not filed until Jan. 22, 2020. Mr. Willock still hedged.

According to the commission, the registrar did not submit a 2021 declaration from the speaker, who claimed to have the declaration on file in his office.

The commissioner responded, “You may have other documents, but on the  basis of these documents, which is the only evidence I have at the moment, you appear to be in breach of Section Three and Section Seven
for all three years.”

Sir Gary gave the speaker until 4 p.m. on Monday June 28, to write and verify the documents he said he would submit. Mr. Willock told the Beacon yesterday that he requested two extra days, and that he would return to the COI on Monday with “bombshell evidence” that he had not breached the law. However, as of Monday, June 28, Mr. Willock was not scheduled to appear before the COI on that day or any other day that week.

During a discussion about whether the speaker had any private engagements with government, Mr. Willock said he liaised with the Deputy Governor’s Office about providing security through a company listed on his declaration of interests, Leonard & Associates Security.

The commissioner drew his attention to a document showing that the HOA passed a resolution enabling the firm to enter into a contract with government.

However, Mr. Willock said he did not follow up with the contract, and he suggested that the commissioner’s failure to find contracts awarded to him meant that he had not engaged with government.

Sir Gary responded, “First, there are many contracts we haven’t found. Second, the answer to the question [about whether Mr. Willock had engaged government] is ‘yes.’”

The speaker then quibbled over the meaning of “engaged.”

He then claimed that the document about the HOA resolution was missing from Mr. Rowe’s bundle, and went on to accuse the COI of hypocrisy in demanding documents from witnesses while allegedly making an oversight itself.

“It speaks volumes to transparency and ethics and integrity,” he said. “We are all here as equals.”

The commissioner said he could not verify one way or the other whether a document was missing from Mr. Rowe’s bundle, but he pointed out that it was in Mr. Willock’s bundle.

Addressing another of Mr. Willock’s declared interests, Mr. Rawat asked if Leonard & Associates became Eagle Security during the “period of engagement” with the Deputy Governor’s Office.

Mr. Willock responded that he formed Eagle Security with a friend, who ran it “because I no longer have interest in working for the government.”

Noting that he remained a partner with Eagle, he added that to his knowledge the firm did not have a contract with government.

“I would have known, commissioner, because I would  have had to declare under the law, in keeping with my transparency,” he said. He was also asked about another company on his declaration, Advance Marketing and Professional Services, the parent company of Virgin Islands News Online.

“We’re kind of limited because I had to kind of take a semi leave from the company since I became the speaker,” Mr. Willock said.

According to a deal he made with the premier and governor, he explained, “I’m to remove myself from all the editorial surrounding Virgin Islands News Online, meaning that I can’t write stories. I can’t tell anybody what to write. I can’t engage in blogs, etcetera. So there was a removal.”

Now, he added, he only handles advertising.

The Beacon has repeatedly asked Mr. Willock about who has had editorial control over VINO — which frequently refers to its owner in glowing terms while attacking his critics — but he often has not provided a clear answer.

The commission team also questioned him about the assistance grants district representatives are permitted to allocate to their constituents.

Since his appointment, he responded, he has made “a conscious decision to stay away from that. … It’s awarded to the 13 elected members. Those are the ones who are elected.”

Before the hearing concluded, Mr. Willock interjected again to say that the hearings “have been very interruptive to the House of Assembly sitting” and to instruct Sir Gary “to be mindful of that.”

The commissioner responded, “We are mindful of it. We’ve had extremely good discussions, particularly with the elected ministers who are, I suspect, as busy as anyone. And we’ve managed to accommodate their wishes in terms of sittings, I think, in every case.”