Governor Boyd McCleary touted the government’s recent progress and pledged that updates are planned for laws governing telecommunications, financial management and airports, during his annual Speech from the Throne at …

END_OF_DOCUMENT_TOKEN_TO_BE_REPLACED 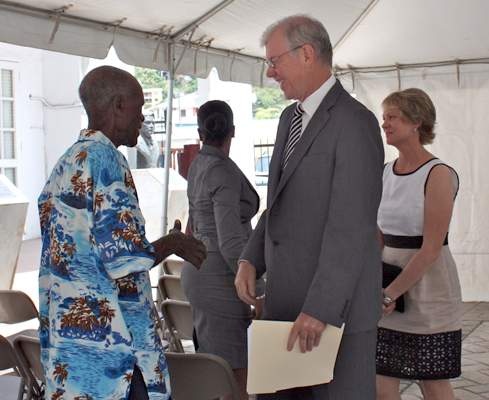 Residents gather under a tent outside the House of Assembly on Monday to hear the Speech from the Throne. Photo: CHRYSTALL KANYUCK

and pledged that updates are planned for laws governing telecommunications, financial management and airports, during his annual Speech from the Throne at the House of Assembly.

A crowd gathered inside to watch the speech, and about a dozen more spectators sat outside the House under a tent, where the address was broadcast on a screen.

Later in the HOA sitting, Natural Resources and Labour Minister Dr. Kedrick Pickering spoke about his staff’s recent visit to Madera, an island that recently expanded its airport. He said the Virgin Islands is “considering” following Madera’s approach by building the expansion to the Terrance B. Lettsome International Airport on a bridge atop concrete pillars.

Dr. Pickering also said the government has received 17 “expression of interest” letters from companies in the United States, China, Canada and the Netherlands, and that the government has now moved on to phase two of the tender process.

Premier Dr. Orlando Smith, who is also the finance minister, answered questions about finances, including the Protocols for Effective Financial Management, the territory’s April agreement with the United Kingdom.