Mr. Adamson, 43, has represented the territory at various international squash tournaments for more than 20 years. He works as a surveyor for his company Adamson Land Surveyors. How long …

END_OF_DOCUMENT_TOKEN_TO_BE_REPLACED 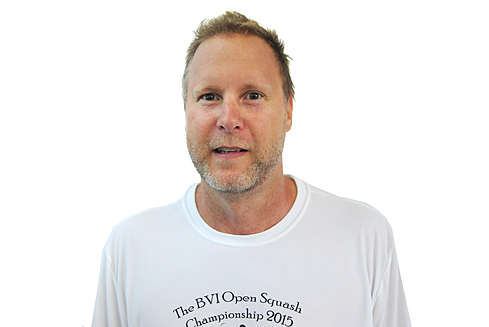 Mr. Adamson, 43, has represented the territory at various international squash tournaments for more than 20 years. He works as a surveyor for his company Adamson Land Surveyors.

How long have you been playing squash?

You father has had a big effect on racket sports in the territory. He is one of the founding members of the Tortola Sports Club. What kind of influence has he had on you?

Well, I grew up here at the Tortola Sports Club. It was like a second home. Every day after school I would be here playing tennis. I picked up squash a little bit later. Pretty much five afternoons I was here. Both of my parents had a huge influence on my passion for racket sports.

Do you and your dad ever play?

We do. We come down and have a social hit. He is in his mid-70s now, but he is very active. He goes running every day, plays tennis and squash three to four times a week. I think everybody that sees him says that they want to be like him when they are his age. He still has that competitive streak in him. If he can beat me, he will. He won’t ease up.

How has squash changed over the years?

In the BVI, it is definitely growing. In the past it used to be a minority sport. But today we have a good mix. There are a lot of local people and expats — it is a good bunch. We also have a good age range, from juniors to veterans. Having four courts helps. You can get on the court when you want instead of waiting. We used to only have the two courts with concrete floors. It would hurt your knees. It is good to see the progression, and it is going to keep growing and growing.

When I first started playing, there was just a squash league, which was played amongst us. Now we have the BVI Open, which is a pro tournament and brings in professional players from outside, exposing us to that level of squash. Having Joe Kneipp here has also helped bring up my game. He is a former top-10 player. Having his expertise and influence here is definitely a good thing.

Why do you play squash instead of tennis?

The difference with squash is the speed of the game. It is much faster and it is very tactical. Its nickname is chess at 100 miles per hour. You are constantly trying to out manoeuvre your opponent. It is not all about hitting the winning shots. It is very difficult to do that with the speed of these players. It may take three, four, five shots to manoeuver your opponent out of position. I enjoy the tactical aspect of it.

You compare squash to chess. Do you find that you are getting better with age and experience, although your stamina might not be as good as it was when you were in your 20s?

It is tough to keep your fitness up. You have to do stuff off the court. You can’t just play squash to get fit: You have to get fit to play squash. It is about playing intelligently, but trying to keep up with the fitness because it does influence your game.

Are there any other sports that you play?

I used to play a lot of football, but I mostly concentrate on squash. If I am not playing, I do a lot of hill sprints. Sunday mornings people will see me going up Joes Hill. I generally do stuff off the court that will make me better at squash.

Do your kids play any racket sports?

What tournaments have you competed in?

For the past 20 years I have competed in the OECS tournaments. I have been lucky enough to go to the CAC Games three times. That is the highest level that I have got to.

What is the tournament you are most proud of?

Probably playing in the CAC Games in Vera Cruz. I trained very, very hard. It was probably the fittest I have got. I played a kid from Venezuela half my age. I wasn’t expecting to beat him, but I played extremely well. I got a game off him and I nearly took the fourth game.

What advice would you give someone who wants to start playing squash?

Pick up a racket and get on the court every afternoon. And most importantly have fun doing it. Unless you are getting paid to do it, it is not a job. It is a very social game.