Spring Regatta back to pre-Irma levels

Last year, organisers had to scramble to get a scaled- down BVI Spring Regatta and Sailing Festival up and running after Hurricane Irma devastated the territory in September 2017. This …

END_OF_DOCUMENT_TOKEN_TO_BE_REPLACED 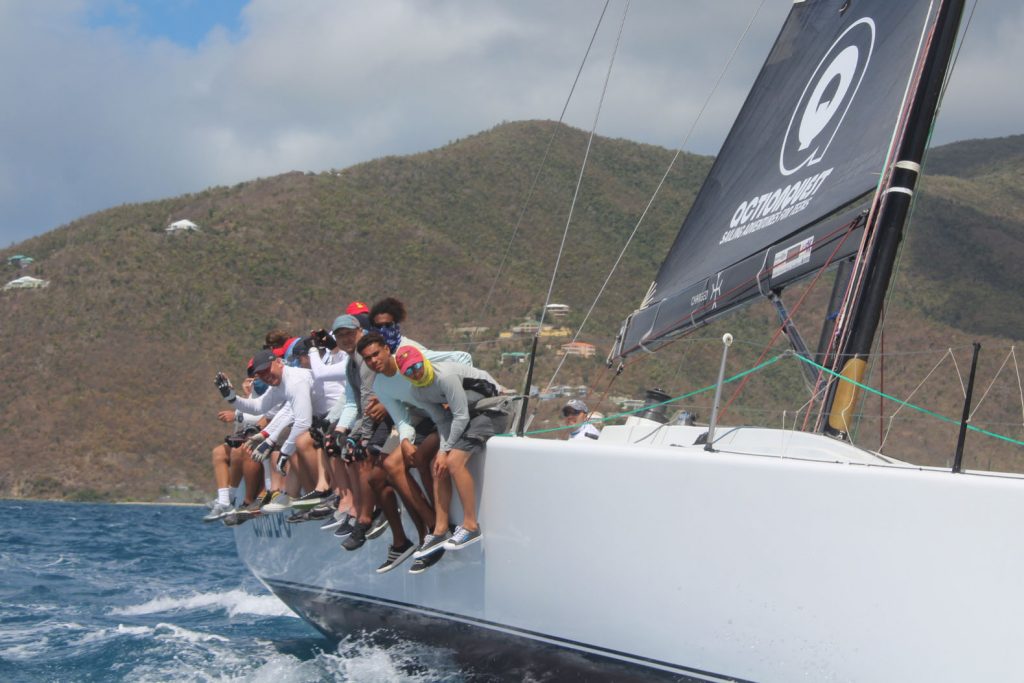 Crewmembers from Carib LPG compete in the racing class of the Round Tortola Race on Tuesday.

Last year, organisers had to scramble to get a scaled- down BVI Spring Regatta and Sailing Festival up and running after Hurricane Irma devastated the territory in September 2017.

This year they’re back to full steam, with attendance expected to rise above pre-Irma levels.
“We’re up 20-plus boats from last year,” said Regatta Chairman Bob Phillips.

As of yesterday, 90 were signed up — two more than took part in the final pre-Irma BVISR — and that number is likely to rise this week.

Even United States news giant CNN noticed, publishing a lengthy report this week about how yachting and events like the BVISR have helped bring back hurricane-devastated economies here and around the region.

Ms. Petz told the outlet that she didn’t even know if there would be a regatta after the hurricane.

“It was really significant, at least to me to say, ‘You know what? We will go on,’” Mr. Petz told CNN. “The sailing industry has a foundation here that even a Category Five hurricane can’t destroy completely.”

Mr. Phillips explained most attendees are here for at least five days, and in that time they book villas, rent cars, eat at restaurants, buy drinks and tour the territory.

“This brings in millions of dollars directly to the pockets of locals each year,” he said, adding, “It is the only sports tourism product working in the BVI and has been all along.”

With partial cloud coverage and a steady 19-21-knot wind, Mother Nature set the stage for a great day of racing on Tuesday — an improvement from last year, when sailors struggled to compete in very light wind.

Ninety boats are already signed up for the weekend, with more expected to register.

“What’s exciting about this year is the support from the marine community,” Mr. Phillips said.

He attributes a lot of this participation to successful marketing and campaigning. With its own website and social media accounts, the BVISR keeps the world updated on the event year-round.

This is the 48th Spring Regatta in what Mr. Phillips called “sailing’s mecca.” There were many returning faces and also many newcomers for the races.

Besides the VI, this year’s fleet includes sailors from the US, Germany, USVI, the Netherlands, the United Kingdom, Puerto Rico, Canada, Antigua, Belgium, Barbados, Russia and Poland.

Setting up the regatta to accommodate the influx of visitors has been a work in progress since last year.

Docks destroyed in the 2017 storms have been rebuilt to accommodate a loyal following and increasing interest in the regatta. The Nanny Cay crew worked hard to get the marina back in running shape after the hurricane, and they continue to make improvements. For their efforts, they were awarded the regatta’s Guy Eldridge True Spirit and Enthusiasm Award in 2017.

“This will be our 18th year hosting the event, and we’re ex- cited to present our brand-spanking-new marina and facilities that make us one of the pre-eminent marinas in the Caribbean,” said Miles Sutherland Pilch, general manager of Nanny Cay.

The Inner Marina at Nanny Cay has more than four docks up and running, and the Outer Marina has 100 slips as well as a fuel dock offering diesel, other gas, ice and water.

The Regatta Village, set up adjacent to the Outer Marina, features a new seaside bar made of recycled materials left behind from Irma.

A new addition to the village this year is the “Eco-Lounge,” an area dedicated to education and leisure.

The lounge is made of recycled plastic and will educate visitors on limiting their environmental impact.

“We’re trying to use what was destroyed in Irma and give them life,” said Ms. Petz, pointing at the bar and stage in the Regatta Village. “We have a whole new seaside bar and we’re inviting people to watch the boats come in.”

As visitors and participants drew into Nanny Cay for the kick-off of the Spring Regatta, staff and some of the more than 175 volunteers for the event reminded guests to recycle where they can.

“We’re giving everyone a bag made of plastic bottles and they’ll return those to us,” Ms. Petz explained. The point of this, she said, was to keep visitors mindful about recycling and waste.