At a warehouse near Port Purcell, volunteers and other relief workers have been sorting dried goods into boxes that will be loaded onto a barge and transported to St. Vincent …

END_OF_DOCUMENT_TOKEN_TO_BE_REPLACED 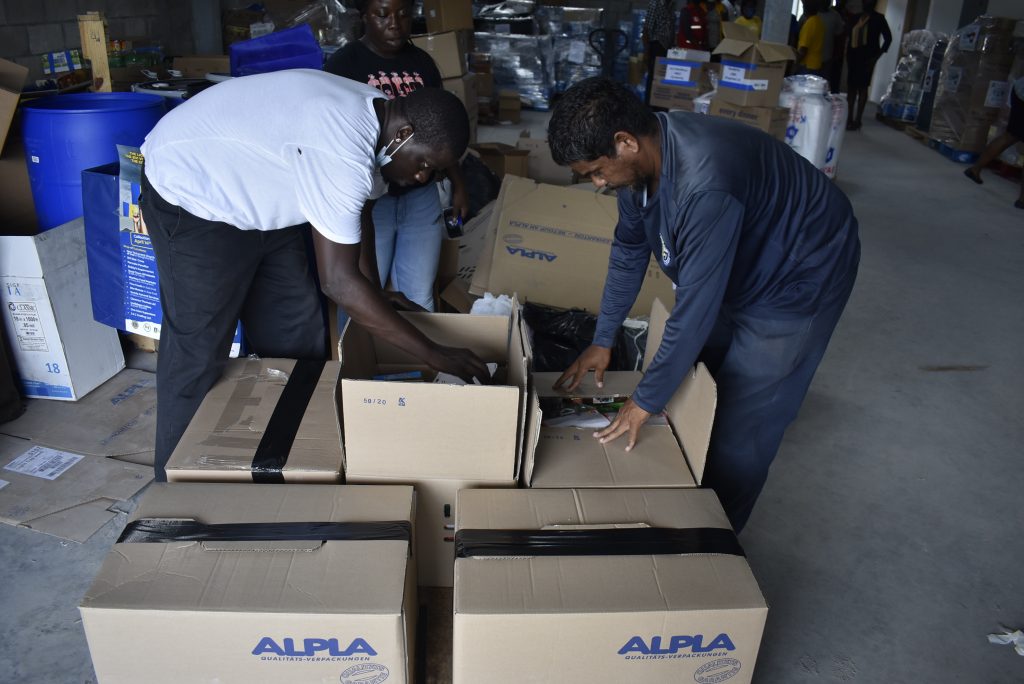 On Tuesday afternoon, volunteers packed boxes with supplies and dried goods bound for St. Vincent and the Grenadines, where about 20 percent of the population is displaced due to the eruptions of the La Soufriere volcano. (Photo: JOEY WALDINGER)

At a warehouse near Port Purcell, volunteers and other relief workers have been sorting dried goods into boxes that will be loaded onto a barge and transported to St. Vincent and the Grenadines to aid residents rocked by a series of volcanic eruptions.

On Tuesday, government and non-profit leaders stressed that the effort so far had been a success because of clear communication between partners playing different roles in bringing relief to victims of the La Soufriere volcano, which has displaced about 20 percent of St. Vincent’s population, or a little more than 20,000 people, the Associated Press reported Tuesday.

During an online press conference, Didier Trebuc, the United Nations resident coordinator for Barbados and the eastern Caribbean, described the scene as “apocalyptic.”

Scientists estimate that 100 million cubic metres of ash have fallen, and rain could turn it into destructive rivers of mud and debris, according to the AP.

Water scarcity has been an issue as well, as the country’s Central Water and Sewage Authority hadn’t been able to harvest any water since the volcano erupted, depleting storage by more than half, Al Jazeera reported last week.

Meanwhile, the volcano continued to erupt as of Tuesday, according to the University of the West Indies Seismic Research Centre.

Here in the VI, Rotarians hosted a telethon last week and have been collecting food and other supplies; the BVI Red Cross is amassing medical supplies; and the Lions Club of Tortola has been collecting donations outside supermarkets.

“Essentially what we said was, ‘Forget the logo: This is for the cause,”’ Rotary Assistant District Governor Ryan Geluck said Tuesday.

To help assuage the water shortages in St. Vincent, government has also been working to dispatch a mobile desalination plant and trucks filled with water, Premier Andrew Fahie said last Thursday in the House of Assembly.

He added that the BVI Ports Authority and the Department of Disaster Management are coordinating on the effort to pack the barge with supplies.

After the barge — which was donated by EZ Shipping — embarks tomorrow for the roughly 40-hour journey to St. Vincent, the next phase of the VI’s relief efforts will be dictated by how the situation unfolds on the ground, said Najan Christopher, director of the BVI International Affairs Secretariat.

In the meantime, a plan is on the way to house displaced Vincentians until the situation stabilises, according to Natural Resources, Labour and Immigration Minister Vincent Wheatley. “Once completed and approved, it will be communicated to the government of St. Vincent and the Grenadines and the wider public here in the BVI,” Mr. Wheatley said last Thursday. Cameron Williams, president of the SVG Association of the BVI, noted that the VI and St. Vincent have a long history of supporting one another in times of peril, such as when the eastern Caribbean country aided in the aftermath of the 2017 hurricanes.

Rotarian Judy-Ann Smith agreed: “It’s time for us to pay it forward.”