A large blaze that engulfed VI Motors over the weekend was likely caused by spilled fuel and a spark, acting Deputy Fire Chief Melvin Jeffers confirmed on Tuesday. At about …

END_OF_DOCUMENT_TOKEN_TO_BE_REPLACED 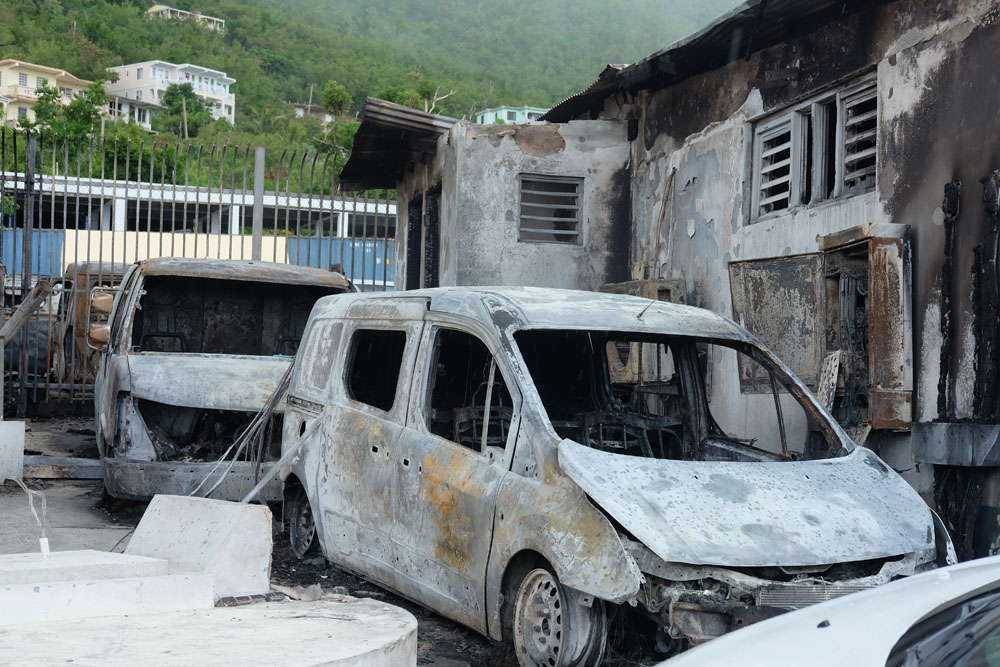 Cars near VI Motors were destroyed when a large fire engulfed the area on Saturday afternoon. (Photo: AMANDA ULRICH)

A large blaze that engulfed VI Motors over the weekend was likely caused by spilled fuel and a spark, acting Deputy Fire Chief Melvin Jeffers confirmed on Tuesday.

At about 2:25 p.m. on Saturday, fire officers arrived on the scene in Duffs Bottom to find several cars and portions of two buildings on fire, as thick black smoke moved into the hillside.

Though some residents had speculated that the parked vehicles, or something inside them, had caused the fire, Mr. Jeffers said some type of static source probably interacted with spilled gas somewhere on the property.

“There’s still an ongoing investigation, but that’s part of what we assume it to be,” he said.

The fire easily could have spread further or turned fatal, considering how many gallons of fuel are at the site, Mr. Jeffers explained.

“[The fire] was very big,” he said. “The vehicles that were parked there were engulfed in flames. We had to fight hard to get the fire under control. We had men on both sides [of VI Motors and the opposite building] to keep the fire from spreading. We had minimal equipment and we just didn’t want a catastrophe or disaster to happen.”

As a back-up measure, officers called the BVI Airports Authority’s Rescue and Fire Fighting Service to help just in case the blaze got out of hand.

Ultimately, though, their services weren’t needed.

“While we were fighting the fire we asked the airport staff to come down and assist us, but when they got there we had everything under control, so they went back up to the airport,” he said.

The Terrance B. Lettsome International Airport was briefly closed while its fire service was dispatched in Duffs Bottom. Government also advised the public to avoid the area.

The fire was put out at about 5 p.m., officials confirmed. “The road in Duffs Bottom is now open and motorists are free to traverse the area,” the Department of Disaster Management stated in a press release shortly thereafter.

“Persons who may have been exposed to the smoke resulting from the fire or experiencing any adverse effects of inhalation should visit a doctor or hospital.”