Zebalon McLean, in an effort to end Meriel Steadman’s winning streak on the local road racing scene since the end of the Blenheim Trust 5k Series and now in the …

END_OF_DOCUMENT_TOKEN_TO_BE_REPLACED 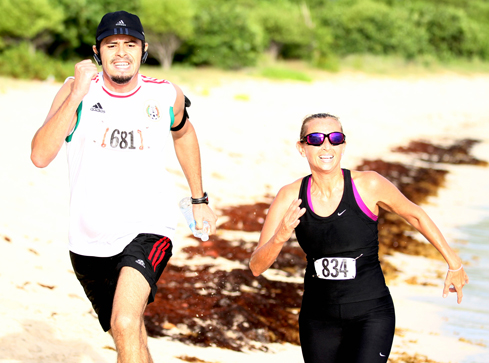 Zebalon McLean, in an effort to end Meriel Steadman’s winning streak on the local road racing scene since the end of the Blenheim Trust 5k Series

and now in the Ceres Juices 10k Series, took tips from fellow competitor Steven Asson — out with a back injury — on how he could prevail.

Mr. McLean’s plan was to stay with Ms. Steadman instead of controlling the race and taking a big lead, then use his speed to outkick her in Saturday’s race on Beef Island, that started and ended on Long Bay Beach, Beef Islands, with a trek through East End.

“It didn’t backfire, I managed to stay with her but it wasn’t completed,” Mr. McLean reflected when asked about the plan. “I intended to stay with Meriel for as long as I could, but you have to be in shape to do that.”

Ms. Steadman began pulling away from Mr. McLean in the Red Bay area about a quarter mile from the turnaround, to finish the 6.2 miles race in 40 minutes and 56.49 seconds, with Mr. McLean dropping finishing in 42:22.18.”

“I did what I could do to hold on for second,” he said.

Ms. Steadman said Mr. McLean ran a good race. “I managed to keep pushing myself and since I had my watch, I can see how fast I’m running so I just kept trying to push it,” she said. “I’d try to over take him, he’d overtake me and it was neck and neck until near the end of the turnaround and he didn’t catch me after that.”

Mr. McLean, the architect of the course with the starting and ending on the beach, said he loved it. It started out with a view of Beef Island and one can enjoy the different nuances of East End.

“There’s nothing like finishing a race on the beach,” he said. “You run on the solid part of the shoreline, you can enjoy sand, sea and surf and, of course, you have a natural whirlpool in which to cool off.”

Ms. Steadman said the course is fast which surprised her. “Kay [Reddy] had said it’s a course with false flats and not one for personal bests, but in fact, everyone seems to be running faster than normal,” she noted.

Clare Louise Whiley described the course as scenic and interesting.

“I think it’s a test for everyone’s training with Carrot Bay coming up in September,” she said. “With the hills there, it’s perfect training for that.”

Barbara O’Neal-Rhoden, in her 10k debut, described the course as being tough for a first time runner. “I don’t think all the other courses are as grueling as this — if you take the hills out of it — to finish with a hill and a run on the sand is a difficult thing to do,” she said. “I’m not a natural runner, but I push myself to see what I’m capable of and I’m happy with my performance. I finished first and foremost.”