As part of an update on a variety of economic affairs, Premier Andrew Fahie went into further detail on how government plans to account for the $40 million granted by …

END_OF_DOCUMENT_TOKEN_TO_BE_REPLACED 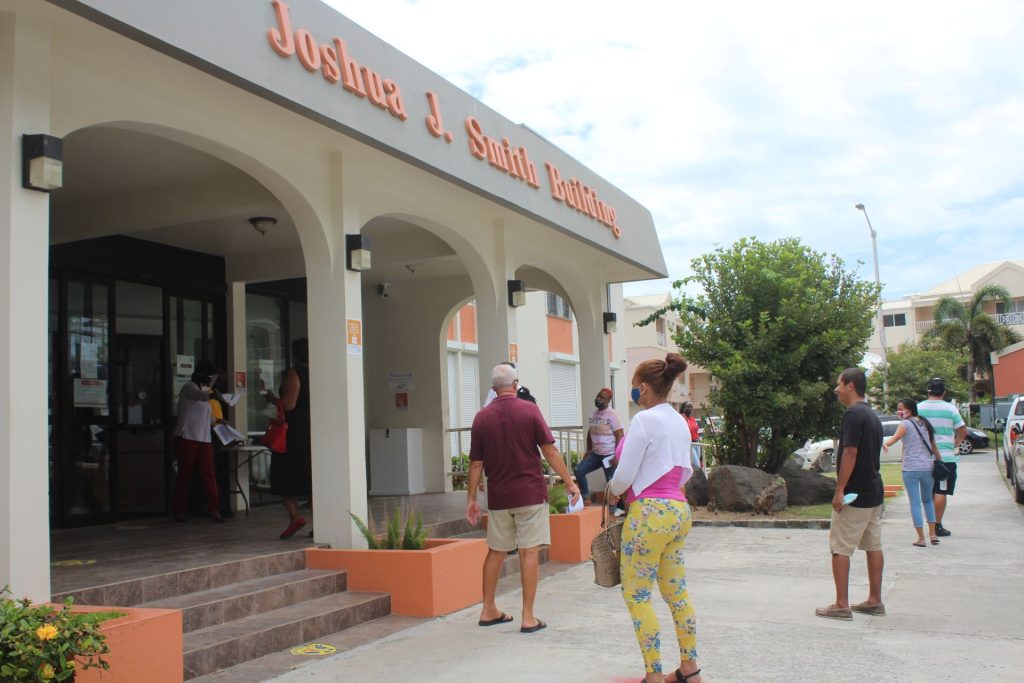 Premier Andrew Fahie said of the 1,796 organisations and individuals who received grants through the Social Security Board-funded Covid-19 stimulus, a total of 195 had submitted documentation of how they spent the funds as of March 28. He urged those who haven’t yet to follow suit. (File photo: ZARRIN TASNIM AHMED)

As part of an update on a variety of economic affairs, Premier Andrew Fahie went into further detail on how government plans to account for the $40 million granted by the Social Security Board for economic stimulus measures amid the pandemic while providing updates on financial issues in a press conference on April 22.

He said given the urgency of dealing with the pandemic, the VI had to “implement the rollout of the stimulus programme and deal with some of the administrative matters on the back end.”

The government is working to evaluate how the spending unfolded, he added.

“The permanent secretary [in the] Premier’s Office has written to all grant recipients reminding them of their obligations to provide an account for the use of funds and to participate in surveys and other exercises for monitoring and evaluation,” he said.

Grant recipients should have received feedback forms and must submit them electronically, he said.

Documentation of spending can include receipts, photographs, and other proof of payment. Recipients should also include a statement about how the funding helped the organisation. Of the 1,796 recipients, 195 had responded by March 28, according to the premier. Most were businesses, he said, urging others to follow suit.

The Caribbean Postal Union, he added, has proposed a project to automate some services at the counter with Post Global.

This platform appears cost effective with the discount being offered to CPU, he claimed, adding that he hopes it will provide easier technical support for officers throughout the region.

“The implementation of the Post Global platform will bring a host of benefits to our people, including a number of new and convenient services and efficient mail delivery,” he said.

The Ministry of Finance is also working to fill “key vacancies” and improve customer service at the Inland Revenue and Treasury departments, Mr. Fahie said.

Systematic improvements include a two-year project to upgrade the Inland Revenue tech system so taxes will be automated.

“By upgrading this software, central government will be able to optimise decision-making and increase the efficiency in tax collection, enforcement, and recovery,” he said.

Government also hopes to address interest and penalties on unpaid property taxes by amending the Land and House Tax Act Cap 207, he said.

Budgeting and auditing at the Treasury is being streamlined with new software as well. Mr. Fahie said “Work Day” should offer more accurate and timely information about the central government budget and is set to go live by June 30.

By May 1, he added, vendors and customers should be able to get paid via direct deposit from the Treasury. The move should save government an approximate $100,000 monthly on printing physical cheques, though vendors can still request that form of payment, according to the premier.

“For those who do have bank accounts, especially on the sister islands, this will be a major convenience,” he said. “Very soon, the Treasury Department will be requesting persons and businesses to provide their banking details to the department.”

He added that work is also progressing to offer e-payments for services, with Banco Popular aiming to set up an online payment platform by the end of the second quarter.

More details about a comprehensive pension plan reform that would give public officers greater flexibility with their retirement options will be announced soon, he added.

Following the onset of the Covid-19 pandemic, some employees at the BVI Airports Authority took a 25 percent pay cut.

Mr. Fahie said on April 22 that they will be reimbursed, and payments are set to start on April 23, with all employees seeing the payment reflected in their paycheque by May 30.

“This was clearly a great sacrifice by the BVIAA employees, and we are thankful to them for making this sacrifice,” he said. “I am also pleased to report that two of the long outstanding increments due to the staff of the BVIAA will also be paid during the aforementioned period.”