As the coronavirus pandemic batters the economy here and abroad, Premier Andrew Fahie promised Tuesday evening that the Virgin Islands will soon join the many other nations around the world …

END_OF_DOCUMENT_TOKEN_TO_BE_REPLACED 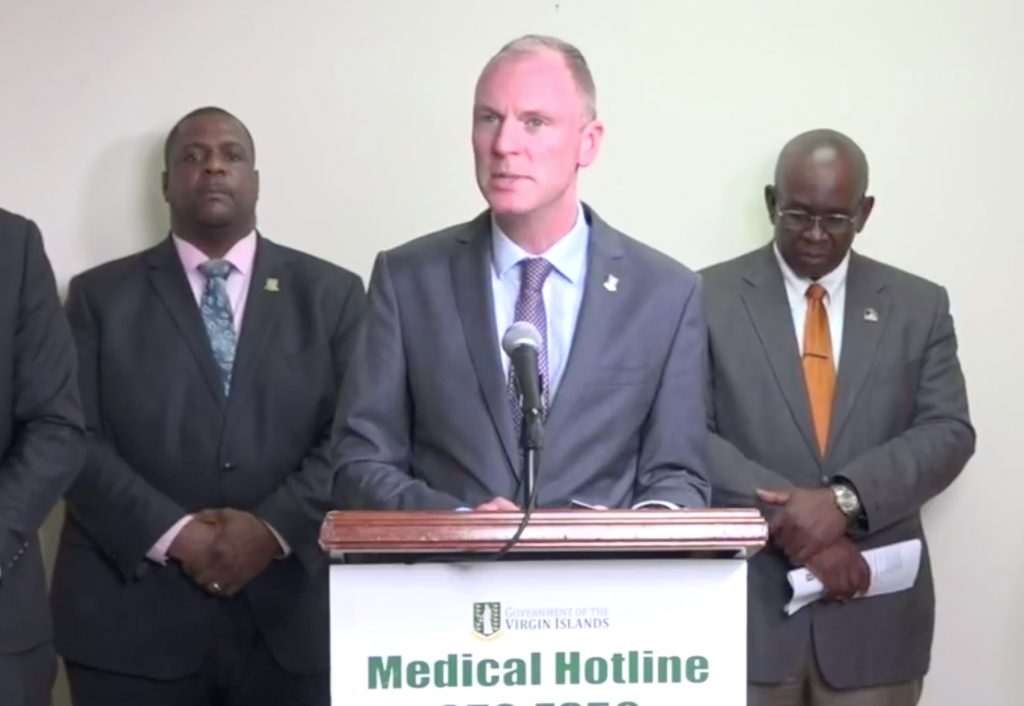 Governor Gus Jaspert speaks during a briefing broadcast via Facebook on Tuesday evening. Though government has promised regular Tuesday evening press conferences, the media were not given a chance to attend or to ask questions remotely. (Photo: GIS)

As the coronavirus pandemic batters the economy here and abroad, Premier Andrew Fahie promised Tuesday evening that the Virgin Islands will soon join the many other nations around the world that are enacting stimulus programmes.

However, he and the United Kingdom appear to have different ideas of who should fund certain aspects of the plan.

Mr. Fahie has said government is working on an “economic strategy” that includes requesting financial assistance from the UK, and on Saturday he said he had asked Governor Gus Jaspert that “for a certain time, [residents] be paid at least minimum wage from a grant from the United Kingdom.”

“The objective is to ensure that the monies that come from the UK directly reach and touch and affect the lives of the people positively, and will not be lost through all kind of technical bureaucracy,” the premier said. “The United Kingdom can rest assured that all monies granted to the government for this initiative will be put in an accountable and transparent system for the people of the BVI to benefit from directly.”

However, on Monday afternoon, the governor released a statement that didn’t provide a definitive answer to the request, but outlined suggestions for how the territory might fund its own recovery package.

Mr. Jaspert has asked Cabinet, he said, to “address internal financing arrangements” as part of efforts to “ensure that individuals and businesses receive the support they need.”

Noting that the territory’s Social Security Board fund is “robust” and the VI is “proudly self-sufficient,” the governor urged the government to “develop its own plans to respond to those in need.”

The UK government, he added, has made a formal request to all overseas territories to provide detailed information for a plan to minimise the economic impact of COVID-19.

“As fiscal and social security responsibilities of the BVI government, the UK government needs to consider the request made on Friday in the context of our own BVI government plans,” he stated.

The governor has also noted that the UK is already providing various aid, including sending 480 coronavirus testing kits to the territory this week.

“This will be the first of many packages of equipment from the UK,” he said. “Whilst the UK and indeed the whole world struggles with accessing necessary medical supplies, I, as governor, will continue to lobby for more on behalf of the people of the British Virgin Islands.”

However, Mr. Jaspert also acknowledged the hardships the UK is facing at home, where Prime Minister Boris Johnson has tested positive for the virus and the COVID-19 death toll has risen to 1,400 people.

On March 11 UK Finance Minister Rishi Sunak announced a $37 billion fiscal stimulus package that includes a response fund to support med- ical services; a promise to pay 80 percent of the wages of many employees unable to work; and a three-month payment relief window for tenants and mort- gage holders, among others.

The package does not apply in overseas territories, and the VI hasn’t launched a comprehensive stimulus package of its own even though some sectors of the economy have received extra government support in recent weeks.

As of March 24, the territory had spent about $8 million of $12 million that the government has allotted for health responses to the coronavirus, the premier said last week, adding that this money was spent on ordering test kits and outfitting the hospital with isolation units, among other measures.

Though the government hasn’t yet announced a comprehensive stimulus package, it has launched two related initiatives.

Transportation, Works and Utilities Minister Kye Rymer announced March 20 that all water bills from the Water and Sewerage Department were suspended for a month starting March 19, and that residents who didn’t have access to water service would receive free deliveries.

Though officials haven’t disclosed details of where the money would go, Agriculture and Fisheries Director Theodore James said in a press release last week that the department is prepared to assist people interested in getting their own gardens started and has cucumber, lettuce, cilantro, squash, and spinach seeds for distribution.

He also pointed out that local plant shops carry seeds and fruit trees, and he encouraged residents to trade plants and seeds.

“We hope to improve self-sufficiency and to improve healthy living through fresh local meats, fish, poultry, herbs and produce,” he said. “We should not be going to the store for mint, lemongrass, rosemary, basil, tomato, pepper, lettuce and spinach; those can be grown in our backyard or on the veranda in containers.”

Mr. Fahie said on March 24 that the water and agriculture-fisheries packages were “clear-cut” so the government went ahead and enacted them.

As Virgin Islands leaders promise a comprehensive economic stimulus package here, such measures are being enacted around the region and beyond. Below are a few examples of what some of those packages include.

On March 24, St. Kitts and Nevis Prime Minister Timothy Harris introduced a $44.4 million stimulus package that includes grants to agriculture and poverty-reduction programmes. Tax cuts were also implemented, including a corporate income tax cut from 33 percent to 25 percent for businesses that retain at least 75 percent of employees, according to the SKN Observer.

“We succeeded in growing our economy five years in a row and recorded surplus after surplus on recurrent, overall, and primary balances,” Mr. Harris said. “As a consequence of our wise financial planning, we are in better position to face this huge crisis and respond using our own resources in the first instance.”

The Dominican Republic government announced a $6.06 billion stimulus package to benefit 5.2 million Dominicans, according to Dominican Today. The package includes the establishment of a “Stay at Home” programme that will offer temporary aid from April 1 to May 31 for vulnerable families and temporary workers with lower incomes, according to the newspaper. The nation has the most reported COVID-19 cases in the region, totaling 859, and it has seen 39 deaths.

With 78 confirmed cases and three deaths, Trinidad and Tobago recently announced a $148 million stimulus package, according to a government press release. Those who lost their jobs due to the pandemic are eligible to receive $222 per month for the next three months. Finance Minister Colm Imbert said such salary relief is the most important measure to take right now.

On March 17, the government of Jamaica announced a $184 million package that leaders said is the country’s biggest fiscal stimulus package ever. Measures will include cash transfers to residents who lost their job because of the pandemic; cash transfers to businesses in certain sectors that keep employees on board; a loan fund for individuals and businesses; and grants for the poor and vulnerable, among others, according to Loop news.

The government also waived tax on alcohol for the making of hand sanitisers, and customs duties on the importation of protective equipment. The nation has 32 confirmed cases of coronavirus and one resulting death so far.

On March 20, Barbados announced a stimulus package worth about $10 million, which would provide $300 per month to approximately 1,500 vulnerable families for three to six months. Additional funds will come in through the Inter-American Development Bank and the International Monetary Fund under the Enhanced Structural Adjustment Facility, Prime Minister Mia Mottley announced.

In some islands, opposition politicians are pressuring the government to move ahead by providing proposals of their own. Anguilla Opposition Leader Ellis Lorenzo Webster wrote Premier Victor Banks suggesting a stimulus package that would include $370 disbursements to individuals; a 30 percent reduction in water bills for three months; duty relief for essential goods; a reduction in government spending; reductions in salaries for government ministers and cabinet members; and a three-month cessation of non-essential government allowances like gas, vehicle maintenance and House of Assembly allowances.

The opposition party in St. Lucia proposed a package that would include direct income support; fuel support; agricultural and other food support; domestic utilities and rental support; and travel and tourism support. Each section of the proposal lists detailed areas along with price estimates. Direct income support ideas include food vouchers, cash stipends, and bonuses for essential workers. The proposal also includes providing electricity and water for the next three months while encouraging landlords not to evict renters.

In a historic move, the Unites States Senate approved a $2 trillion economic stimulus package on March 25. The package includes an increase of unemployment benefits from three months to four months; direct payments to most residents; $55 billion for health care; $150 billion for coronavirus relief; $10 billion for the Small Business Administration to provide grants; $17 billion to cover small business loan payments for up to six months; and $30 billion in emergency education funds, among other spending.

During a press conference on Sunday night, President Donald Trump said citizens should expect to receive $1,200 cheques in three weeks, while stating that he thinks most landlords and banks will be flexible with rent payments during the state of emergency.