Dressed in white attire on a bright Sunday afternoon behind the Crafts Alive Village in Road Town, members of the Afrikan Studies Klub and supporters gathered for the 11th annual …

END_OF_DOCUMENT_TOKEN_TO_BE_REPLACED 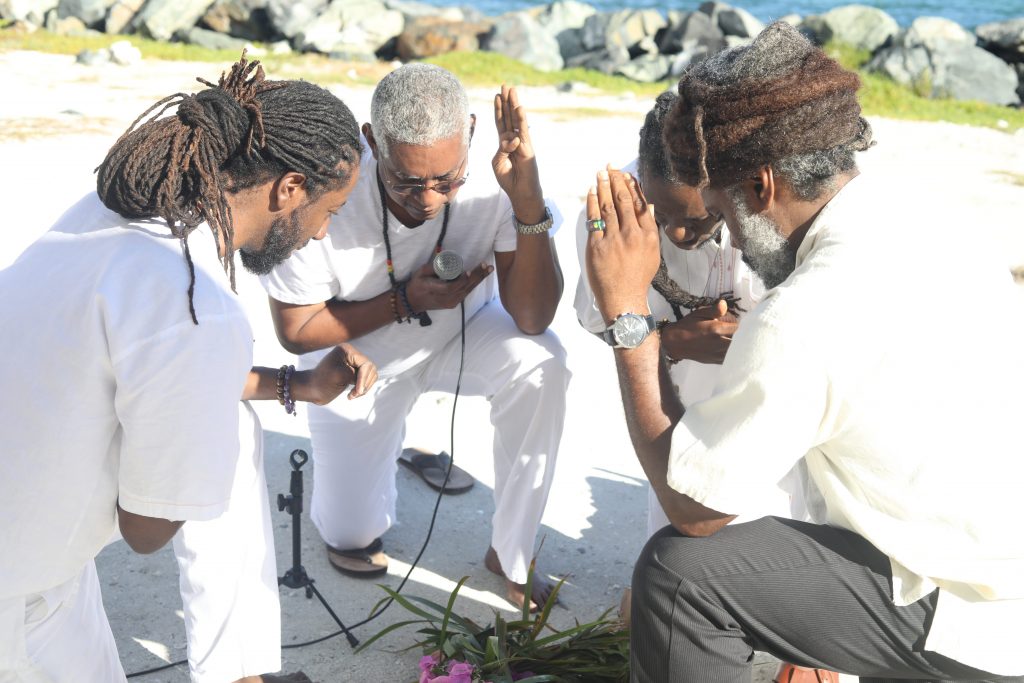 Dressed in white attire on a bright Sunday afternoon behind the Crafts Alive Village in Road Town, members of the Afrikan Studies Klub and supporters gathered for the 11th annual wreath laying ceremony and paid tribute to ancestors who lost their lives to the trans-Atlantic slave trade.

Rochelle Smith, who heads the Humanities, Social Sciences and Communication Department at H. Lavity Stoutt Community College, presented a dramatised essay on Pereen Georges, whose testimony helped send slave master Arthur Hodge to the gallows and has been credited with helping to bring about the end of slavery across the British empire.

Ms. Georges was a free woman of mixed parentage — then referred to as a “mulatto” — who worked for Mr. Hodge’s wife and managed the boiling house on his estate. Ms. Smith noted that because of the nature of her work, Ms. Georges sometimes spent time in Belle Vue on the Hodge estate, but owned her own home in Road Town.

“And when Arthur Hodge left this world swinging from the gallows, he died owing me money for work I had done,” Ms. Smith dramatised in her Georges presentation, which she first enacted during last year’s August Emancipation Festival. “But the fact that his cruelty was over was payment enough for me.”

Mr. Hodge, whose family also owned an estate near the present-day Hodges Creek, was notorious. Ms. Georges told the court that she once saw a slave child named Tamson in the sick house “with all the skin off” him after he had been beaten by Mr. Hodge’s order and then dipped into a copper of boiling liquor.

Ms. Georges also recounted the story of a slave named Cuffy, who was whipped for over an hour until “he was cut to pieces” and had no black skin remaining from his hips to his hands, Ms. Smith said in her presentation.

Additionally, Mr. Hodge convinced himself without any evidence that Margaret, a woman who worked alongside Ms. Georges, was plotting to poison him and his family, according to the testimony.

As punishment, she said, he poured boiling water down her throat.

However, it was the story of Prosper that sealed Mr. Hodge’s fate. Prosper saw a mango fall from a tree and picked it up off the ground, and Mr. Hodge demanded that the slave pay him six shillings for it, according to testimony at the trial.

Prosper couldn’t pay the exorbitant price and asked Ms. Georges, who gave him three shillings, which was all she had, Ms. Smith recounted in the presentation.

Prosper was severely beaten, and within days he died a painful, humiliating and lonely death. The stench of his body is what revealed his death, and he was buried unceremoniously in a shallow pit behind his back door without even a basic coffin, according to the performance.

At Mr. Hodge’s trial, Ms. Georges was the first witness called, and she answered every question with honesty and conviction, leading to Mr. Hodge’s conviction for murder and subsequent hanging, Ms. Smith recounted.

Dr. Kathy Smith, acting director of the Virgin Islands Studies Institute at HLSCC, also spoke at the Sunday ceremony, giving a presentation on the cost of colonisation.

In the VI, she said, the United Kingdom’s historical dominance of the economy was not established in a clear-cut, straightforward manner.

“This was because it took some time for Britain to be convinced that the colony of the Virgin Islands could make money for the mother country,” Dr. Smith noted. “And I want you to remember at this point that the only reason that the mother country establishes a colony is for the purpose of strengthening its own economy at the expense of the colony’s economy.”

After attendees tossed their wreaths in the sea, Mr. Christopher said it is always heartwarming to see community members who are interested in reconnecting with history.

“We had a lot of history today about our heroine Pereen Georges and recounting the story of Arthur Hodge and her involvement in getting him brought to justice,” Mr. Christopher noted. “Dr. Kathy Smith gave her presentation on neo-colonisation, so I think we had a great event, and as usual the vibes are always nice.”