On Nov. 18, a day before four United States tourists were detained for sailing into Virgin Islands waters, St. Thomas sailor Kevin Gregory was similarly apprehended by VI authorities about …

END_OF_DOCUMENT_TOKEN_TO_BE_REPLACED 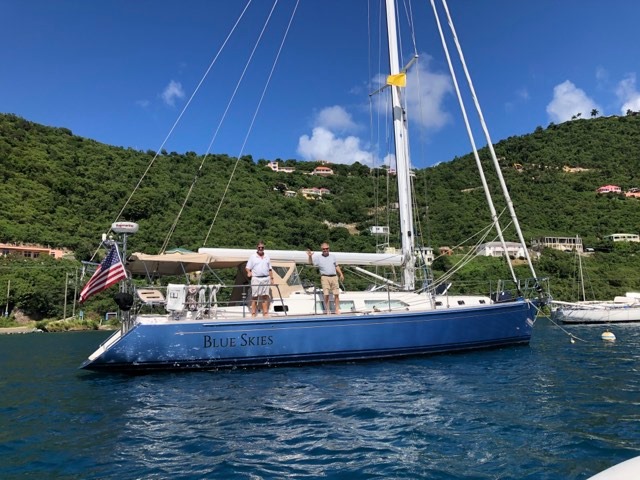 Kevin Gregory, who has been sailing in the Virgin Islands for ten years, was detained on Nov. 18 while sailing about a mile from Jost Van Dyke, and he later paid $20,000 and signed an admission of guilt to avoid going to court. He said he was on the way to Francis Bay, St. John, and didn’t plan on stopping here. (Photo: PROVIDED)

On Nov. 18, a day before four United States tourists were detained for sailing into Virgin Islands waters, St. Thomas sailor Kevin Gregory was similarly apprehended by VI authorities about a mile south of Jost Van Dyke and directed to the West End customs and immigration office, he said.

There, customs officers presented him with a difficult choice: sign a document admitting that he had broken the territory’s laws and pay the maximum fine of $10,000 for each of the two charges against him, or challenge the complaints in a lengthy court process with an uncertain outcome, he said during a Tuesday interview with the Beacon.

He and his two passengers spent the night aboard his boat moored in front of Sopers Hole while his lawyer unsuccessfully tried to bring down the fines, and the next day he paid $20,000 to the Customs Department and sailed back to St. Thomas, his love of this territory tainted, he said.

“What hurts me the most is that I moved to St. Thomas because I love the Virgin Islands,” said Mr. Gregory, who splits his time between Rhode Island and St. Thomas, in reference to both the US and British territories. “The whole place was home.”

Now, he added, it feels like “my home was ripped out of my heart.”

Nov. 18 was a particularly“awesome” day for sailing, with calm seas and gentle winds, Mr. Gregory said.

He and his two passengers, Americans James Whistler and Andrew Dunbar, set their sights on Francis Bay in St. John.

Though he knew the VI’s borders were closed, he had no intention of stopping in the territory and thought he therefore wouldn’t encounter any problems, he claimed.

When he was roughly a mile south of JVD at about 1:30 p.m., a police boat coming from the direction of Sopers Hole sped towards Mr. Gregory’s vessel without announcing itself via radio or warning him to head back towards St. Thomas, he claimed.

The vessel came alongside Mr. Gregory’s boat, the Blue Skies, and an officer on board told him to stop, he said.

After Mr. Gregory rolled up the sails, the vessel tied up to the Blue Skies, and the officers asked him to hand over his ID and his boat documents, and questioned him about where he had come from and whether he knew his current location, Mr. Gregory said.

He then followed the officers into the West End customs office, where he was met by Customs Officer Achieva Brathwaite, a familiar face who had provided him clearance to enter the territory “dozens of times over the past ten years,” Mr. Gregory said.

Mr. Gregory tried to explain that he was just trying to reach Francis Bay and had no intention of entering the territory, he said.

Nonetheless, he was told that he was in violation of sections 24 and 26 of the Customs Management and Duties Act.

The first section prohibits vessels from arriving at a place other than a customs port, and the second compels boat captains to file a report to the customs commissioner no more than 12 hours after arrival.

‘I went a little ballistic’

Mr. Brathwaite informed Mr. Gregory that the maximum fines for these two violations, if paid as part of the admission of guilt, would be $10,000 each, totaling $20,000, he said.

After regaining his cool, he said, he “reminded” Mr. Brathwaite that he is “a regular customer to the BVI,” and that he spends more than $10,000 a year storing and maintaining his boat at Nanny Cay.

When Mr. Brathwaite informed Mr. Gregory that there was nothing he could do and that the decision was above his level, the American spent the ensuing night aboard his boat moored in front of Sopers Hole, talking with contacts at Nanny Cay and with his VI attorney Dancia Penn, in hopes that she would be able to drive down the fines he would have to pay, he said.

But when morning came on Nov. 19, the fines remained $10,000 each, so Mr. Gregory charged his credit card, waited about three more hours to receive permission to exit from Health and Social Development Minister Carvin Malone, and sailed back home.

Since returning home, Mr. Gregory has been working with Ms. Penn to try to recoup his fines, he said, claiming in a Dec. 1 email that the territory violated the United Nations Convention for the Law of the Sea by not issuing a notice to mariners that it had suspended the “innocent passage through territorial waters;” and that he should not be fined for allegedly violating section 24 of the Customs Act, as this section requires that vessels arriving in the territory report to a customs house within 12 hours of arrival.

As “the police boat detained us at the West End customs house, … the fine for violation of this law, ipso facto, is wrong,” Mr. Gregory wrote.

Whether or not he is reimbursed, he doesn’t envision any future jaunts to the territory, he added.

“As much as I love the territory, at this point in my life, I don’t have any plans to return to the BVI. … I just feel so hurt and abused,” Mr. Gregory said.

Neither Customs Commissioner Wade Smith nor Mr. Brathwaite responded to requests for comment.

On Nov. 19, the same day Mr. Gregory returned to St. Thomas, a group of four Americans were sailing from St. John aboard the sailboat Marie Elena when they were stopped by a VI patrol boat near Jost Van Dyke, and escorted to the Road Town customs dock, Nick Cancro, captain of the Marie Elena, told the Beacon on Tuesday.

Though Mr. Smith offered Mr. Cancro a deal similar to Mr. Gregory’s — he could sign an admission of guilt and pay a $10,000 fine for each of the two charges against him — Mr. Cancro’s credit cards were not accepted, so he and his friends were forced to face the court, he said.

Though they were never placed under arrest, the four elderly tourists, one of whom is being treated for cancer, spent a total of 14 days in detention, Mr. Cancro claimed.

They were confined to their boat during the first four days before being moved to the Hotel Castle Maria, where Mr. Cancro complained of cramped quarters and bugs crawling about his room.

While awaiting trial, the group was taken to be tested for Covid-19, and they all tested negative, according to the captain.

During that time, they also reached out to a media outlet in the US as well as US politicians including Senator Lindsay Graham of South Carolina, the home state of Marie Elena passengers John and Lynn Hines, who “tried to talk some sense into these people,” Mr. Cancro said.

Their first appearance at Magistrates’ Court, on Dec. 1,originally was scheduled as a bail hearing, but upon learning from Magistrate Christilyn Benjamin that the ensuing trial could potentially spill over into February or March, their attorney David Penn requested that his clients enter their pleas and proceed directly to sentencing.

All four of the defendants pleaded guilty to landing in the territory without leave of an immigration officer and were fined $1,000 each.

Like Mr. Gregory, Mr. Cancro has long loved visiting the VI, but he has no intentions of returning after the ordeal.

“My big question is why are these people trying to kill the tourist industry,” he said.