COVID-19 > Students head back to class

Students head back to class

After about a year and a half of remote learning due to the pandemic, most public school students headed back to their classrooms on Monday. But health issues besides Covid-19 …

END_OF_DOCUMENT_TOKEN_TO_BE_REPLACED 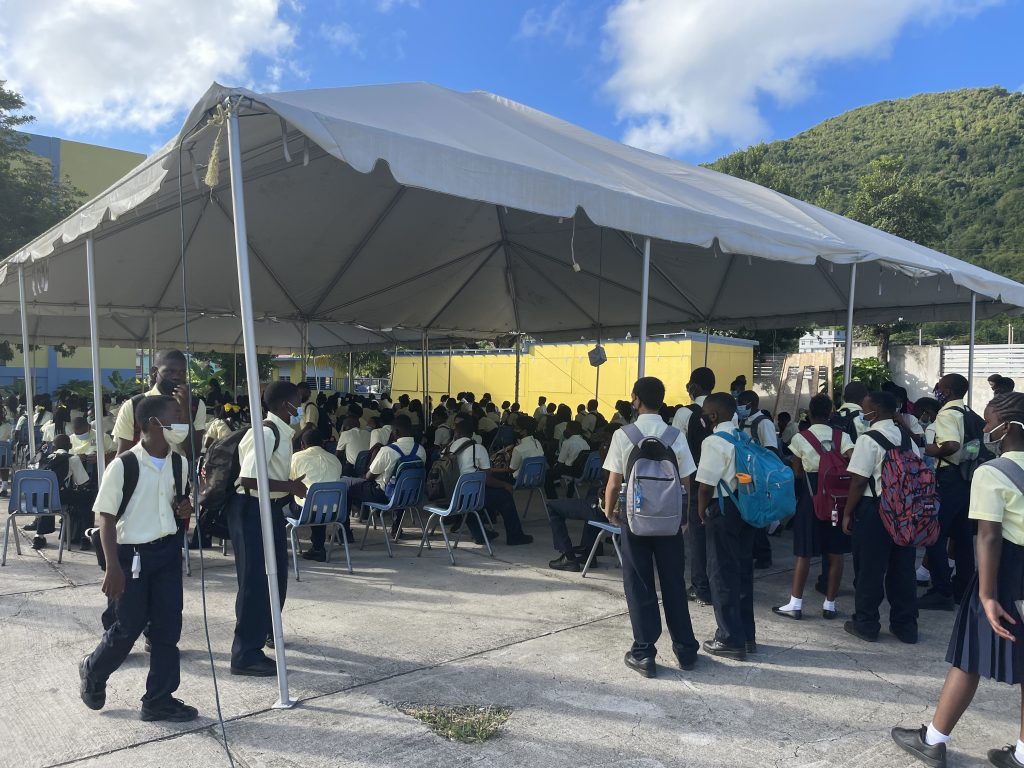 Students gather under a tent at the Elmore Stoutt High School yesterday during their first week of classes.(Photo: ZARRIN TASNIM AHMED)

After about a year and a half of remote learning due to the pandemic, most public school students headed back to their classrooms on Monday.

But health issues besides Covid-19 persisted, causing at least one school to remain closed. The Francis Lettsome Primary School in East End could not open due to a mould issue that Premier Andrew Fahie said will be addressed soon.

“There are some schools that upon rehabilitation of the school, they have discovered certain areas that have mould,” Mr. Fahie said during a Friday press conference. “Some of them weren’t identified before. Those have to be dealt with before the children go back into the classroom.”

Deputy Premier Dr. Natalio “Sowande” Wheatley, who is also the education minister, had told residents in early August that mould issues in schools had been handled after government spent more than $400,000 on repairs and mould mitigation.

On Friday, the premier admitted that the outstanding issues should have been addressed earlier, but he stressed the importance of handling them now and not allowing children to return to mouldy classrooms.

Opposition members expressed frustration over the situation on Tuesday evening during a National Democratic Party Radio broadcast, alleging that the government had “failed to plan.”

“We need to do a better job of maintaining infrastructure, especially when it comes to the health and safety of our most precious resource: our children,” Opposition Leader Marlon Penn said.

ESHS students grappling with Covid-19 and delayed classroom construction are once again split between a temporary campus at the former Clarence Thomas Ltd. building in Pasea and the L-shaped building on the ESHS campus.

But for some students, the move back to school is welcome. Eleventh grader Raymech Brown was excited and optimistic about the year ahead.

“I’m looking forward to it because summer hasn’t been ex- citing. When I go back to school I’ll be with my friends,” he said. “We used to have classes that were over an hour-long [before the pandemic]. Now they’re just 40 minutes. But I think if we make the most of it, it will be good.”

“I would stay home and teach the online class, then go to school for the face-to-face classes,” he explained.

His students this school year need a little more instruction and guidance to follow classroom rules — something most of them didn’t have to adhere to last school year, he said.

The move to bring all students back to campuses was announced in early August.

Though a surge in Covid-19 cases interrupted summer programmes and other activities, Cabinet decided that the territory was stable enough to reopen in-person classes this month.

“The decision has been made because we recognise that there are some students who will benefit from being in the classroom environment, and we are laser-focused on our students’ success,” Dr. Wheatley said at the time.

Students are required to come to school with their instructional electronic devices, face masks or shields, personal hand sanitisers, and cleaning wipes. Parents are also required to send school lunches.

Parents of primary school children are responsible for transportation, while secondary school students are using buses.

“Due to circumstances beyond our control, there will be no orientation for new and returning students of the Francis Lettsome Primary School,” Principal Carleen Simmonds-Parsons said in a notice to parents.

The school’s students are currently learning online until the mould situation is rectified, though officials have not provided a projected timeline.

Private school students have also been heading back to class in recent days.

At Cedar International School, which resumed classes last week, expanding facilities to allow for in-person classes throughout the previous schoolyear allowed an easier transition back to school this year, educators said.

Head of Secondary Education Zach Pascoe and Head of Primary Education Gemma Restell said that right after the start of the pandemic, the school quickly shifted to an online learning system that utilised Zoom heavily.

But its priority last summer was to brainstorm ways to bring the children back to class in the safest way possible at the start of the 2020-2021 school year.

“The key was figuring out with X amount of students and the given the guidelines of six feet of social distancing … how we could manage the combination and get students on campus,” Mr. Pascoe said. “The most important thing was that they were on campus. It’s good for everybody.”

To that end, the school expanded existing classrooms and purchased white tents that were then outfitted with technology and furniture.

The upper grades are still learning in the tents, where students remain with those in their grade for the day, while younger students are in expanded classrooms in the school building. Shift systems have been implemented for entering and exiting the building and getting lunch.

A theme for the 2021-2022 public school year has been coined as “Educating all in changing times: Every learner succeeds.”

As the year gets underway, various events are being observed.

Schools celebrated International Literacy Day on Wednesday. UNESCO has held the celebration since 1967 to remind the public of the importance of literacy as a matter of dignity and human rights.

A virtual back-to-school service will be held on Sunday at 3:30 p.m.

“The service is being held to seek God’s guidance and blessings for the 2021-2022 academic year,” a Friday press release stated.

On Sept. 21, schools in the territory will observe UNESCO’s International Day of Peace, and on Sept. 27, the secondary school basketball league will begin.