“Being a bully I refuse! Being respectful is what I choose!” Chanting such slogans, hundreds of students from schools around the territory marched on Friday from the Festival Village Grounds …

END_OF_DOCUMENT_TOKEN_TO_BE_REPLACED 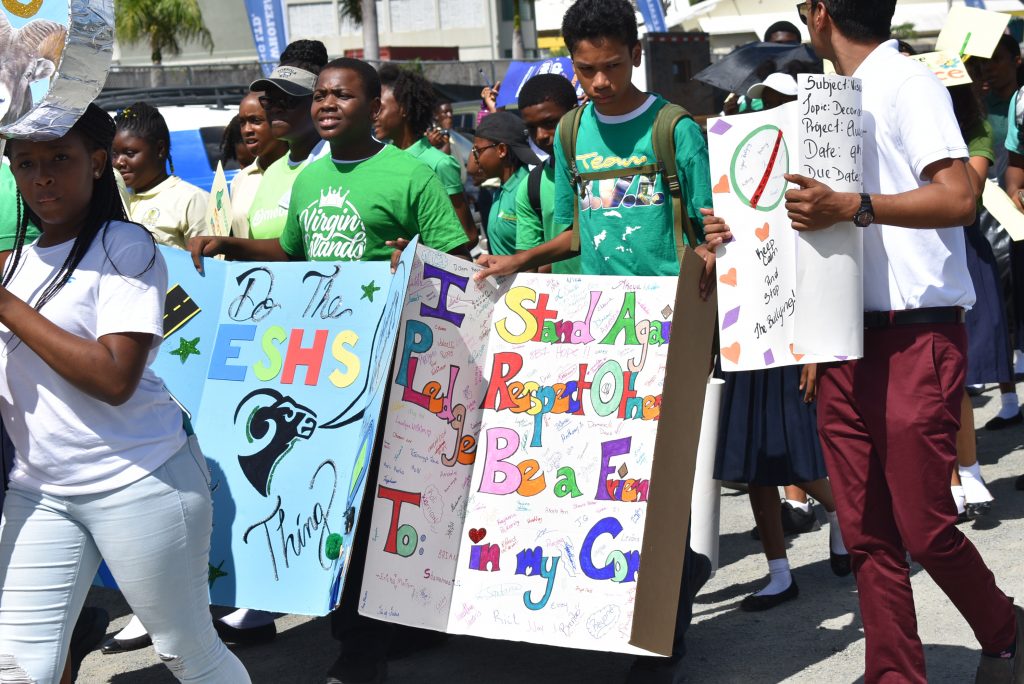 “Being a bully I refuse! Being respectful is what I choose!”

Chanting such slogans, hundreds of students from schools around the territory marched on Friday from the Festival Village Grounds to the Central Administration Building, waving placards alongside a vehicle decked out in themes urging their peers to “Choose Respect,”the theme of Anti Bullying Week.

Schools had spent all week putting together songs, dances, skits, posters and videos in a
friendly competition that encouraged them to explore themes of respect and kindness.

“We need to take it beyond schools and talk about bullying
in our territory,” Dr. Marcia Potter, permanent secretary in
the Ministry of Education and Culture, told a crowd gathered at the CAB.“We need to stop
bullying everywhere. It’s not cool.”

Henderson Tittle, president of youth organisation Mentoring Anointed Leaders Everywhere, asked,“Who is this monster; who is this giant among us that calls himself a bully? Bullying is a situation. It’s not a boy, it’s a not a girl;
it’s just a situation.”

During a skit, a student from Ebenezer Thomas Primary School demonstrated one
of these situations, playing the role of a bully spreading hurtful rumours about a classmate.

“I heard Meghan’s dad is a hit man,”she said.“I even heard he was responsible for the death of Dr. Martin Luther King.”

This scenario was perhaps exaggerated, but according to Jovan Cline, counsellor at Elmore
Stoutt High School, such scenes play out all too frequently in schools around the VI.

“We definitely have bullies,” Mr. Cline said in a video published by Government Information Services. “We’ve gotten accustomed to … the idea of having to toughen each other up. But really it does get out of hand, and we lose the consideration and respect when we push it aside and say, ‘Oh, it’s nothing.”

Each school focussed its activities on a specific type of bullying, whether verbal, social,
cyber or physical.

Of all forms of bullying that take place in the territory, Mr. Cline said cyberbullying
has become most prevalent.

It’s a tough problem, he said, because it allows offenders to extend their reach to victims
beyond school grounds.

The counsellor advised parents to be vigilant by recognising changes in behaviour that
indicate a child could be facing bullying, and by sharing their own experiences.

“The parents who are open with their kids: Those students usually don’t have as much issues in terms of being the bully,” he said.“I let them know that when I was in school I was a bully.I didn’t realise it.”

During the march, staff from the Virgin Islands School of Technical Studies drove a
vehicle decked out with papiermâché computers representing the kind of insults children encounter online.

The victim was represented by a crying emoji.

Later, a VISTS student read a poem in the persona of a bullying victim.

Ultimately, Francis Lettsome Primary School won first prize among the primary schools for its students’ interpretive dance routine, and VISTS was the secondary division winner for the poem.

According to Mr. Cline, the goal for the week was to get students to think deeper about bullying, where it originates, and how it can be addressed at its roots.

“We’re really engaging the students to think about what they’re doing … and have them consider the source behind the whole issue and come up with some real solutions,” he said.

Mr.Tittle underscored this idea during his remarks, remarking that fighting bullying is about more than just turning the tables on the bullies: It’s about showing compassion for them.

“I don’t want you to treat the bully bad,” he said, adding, “Bullying is a behaviour that is
often learned in response to stress in a bully’s world.”

At the end of the afternoon, students released hundreds of green balloons representing their choice to “choose respect.”

“Because someone doesn’t look like me or you doesn’t mean we must use unkind words to describe them,” Dr. Potter said. “We must be conscious that we are all God’s children. We all have a purpose here and we need to respect each other no matter what.”