Charter captain and marine engineer Tim Dabbs cracked open the door to the engine room on the catamaran Zingara, which was moored at Nanny Cay. “These need to be serviced …

END_OF_DOCUMENT_TOKEN_TO_BE_REPLACED 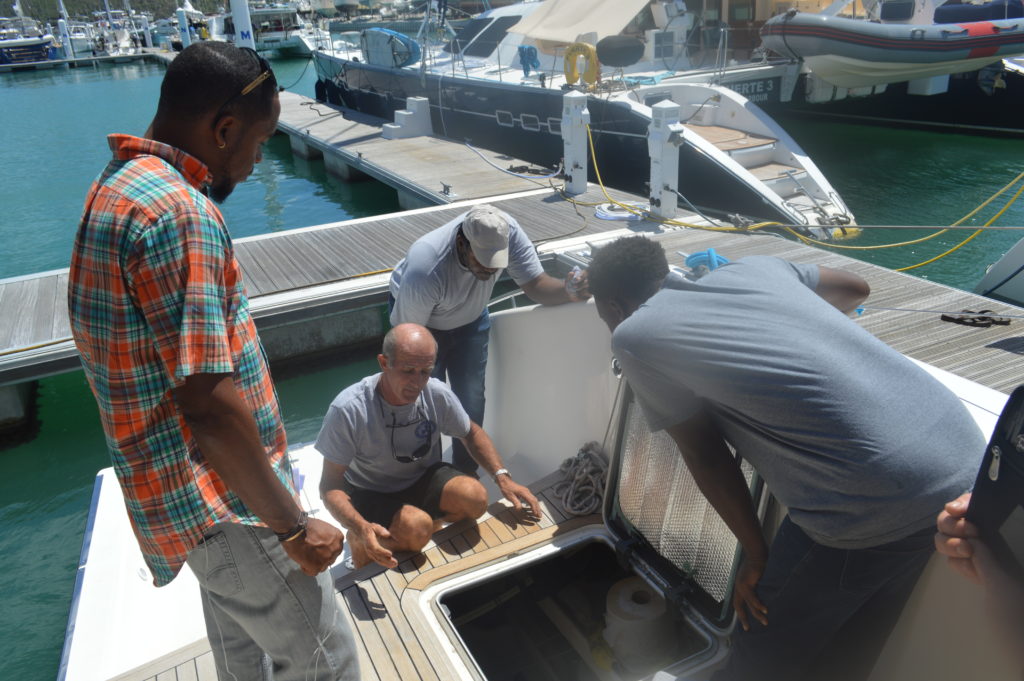 Charter captain and marine engineer Tim Dabbs cracked open the door to the engine room on the catamaran Zingara, which was moored at Nanny Cay.

“These need to be serviced constantly. When they go down, they go down hard,” he said of the engine, adding that the same goes for yachts’ air conditioners. “Believe me, it gets hot on these boats.”

Malfunctioning engines and air conditioners might be bad news to boat owners, but they are music to the ears of Tyrone Harrigan and his classmates. The three young men arrived at Nanny Cay Friday hoping to learn how to service them — and potentially launch lucrative new careers.

They were there to register for the May-June installment of a series of one-month courses in the marine sector offered by H. Lavity Stoutt Community College.

The marine programme — which is part of a larger short-course series the college launched after Hurricane Irma — began in April and will offer another round of classes starting in June.

Other one-month courses in the areas of construction, home repair, and basic plumbing and wiring began in January and have continued.  According to Lloyd Wheatley of the HLSCC Division of Workforce Training, 282 students have enrolled in that programme as of the end of April.

Taught by industry veterans and aimed toward residents who are unemployed or interested in training for a new career, the courses are designed to ensure a skilled labour force to assist with the ongoing hurricane recovery, according to the Ministry of Education and Culture.

According to instructor Clive Petrovic, a total of 17 students signed up for the marine course in April. He expects at least a dozen to enroll this month.

“We’ve had a number of other people signing up for courses that didn’t come to the orientation,” he explained.

Though the numbers were dwarfed by the hundreds who signed up for other short courses, Mr. Petrovic explained that many students enroll in construction-related classes for “do-it-yourself purposes; trying to fix up their homes.”

“In the marine industry, that’s not the case,” he said. “Most of our students are looking for careers in the industry.”

Mr. Harrigan, who is unemployed, said he signed up for a course in diesel engine troubleshooting. He hopes it will be the first step toward getting his captain’s licence, a process that was temporarily derailed by the hurricane.

“I just like boats, and I love being on the ocean,” he said, “and I want to make a living doing that.”

A taste of the industry

The one-month marine courses are an offshoot of the semester-long marine industry programme at HLSCC run through City & Guilds, a vocational education body based in the United Kingdom.

“We were asked to see how we could to get more BVIslanders into the marine industry,” according to Miles Sutherland-Pilch, general manager of Nanny Cay and a former instructor for some of the marine courses.

Eventually, the college decided on a course of study that included introduction to the marine industry; marine diesel engines; electrical; and boat building. That programme, which has been running since the 1990s, will resume in September.

However, for now, Mr. Sutherland-Pilch said, “It is more immediate and about getting people’s feet wet, really giving people a taste of the marine industry — and hopefully they will go on to do the full courses in September.”

Dwayne Muir signed up for diesel and electric courses to broaden his mechanical skills.

“I’m qualified in electronics, but diesel engines are different for me,” he said. “It’s very different from the automotive industry, because you do certain things on a car that you wouldn’t do on a boat.”

Mr. Petrovic said the classes are designed to mix classwork and hands-on training.

“The industry changes constantly; the work that goes on within each special area also changes, so we give the instructors flexibility to adapt,” he said. “[They] will have an opportunity to see how that field that [they’re] looking at connects with the rest of the industry.”

Consultant and instructor Matthew Holt said, “The one-month course is like a teaser. By the end of it they’ll be doing some live training.”

Mr. Sutherland-Pilch added, “During the last courses, I had each of [the students] driving the big travel lifts around the boatyard. It’s very difficult to do it all in the classroom. You’ve got to be out there doing it.”

Courses for this semester include diesel engine troubleshooting, marine electrical wiring, and basic woodworking and joinery.

In April, some of the offerings included outboard motor repair and rigging — subjects that will return again in June. Mr. Petrovic said the college also is looking at adding courses in painting and welding due to a high demand for those fields.

“There’s going to be some options along the way,” he said.

Mr. Sutherland-Pilch noted that Nanny Cay went back to work days after Hurricane Irma, salvaging and repairing the hundreds of boats that needed attention.

“There’s at least 400 people working on Nanny Cay right now; that’s not including the crews on the boats,” he said.

On Friday, seemingly everything was being repaired, from Yamaha outboard motors to the docks themselves. Along the tour, workers in a wide variety of fields waved hello and spoke to the students about their jobs.

“It’s a matter of specialising in one area you’re fascinated with,” Mr. Sutherland-Pilch said.
He pointed to a nearby outboard motor.

“At least half the boats here use one of those, and [the mechanic] is the only one who knows how to repair them,” he explained to the students. “They’ll call you up. You can charge whatever you want.”

Instructor Geoffrey Brooks stood in front of the wooden skeleton of the traditional sloop Sea Moon, which he helped build in 2003 alongside a shipwright from Anegada.

Starting Monday, he’ll be cobbling the sloop back together with the help of students in his boatbuilding course, a project he hopes will play a role in reviving a disappearing art.

“We’re in a bad situation for boatbuilding here since Irma,” he said. “But we’re not giving up.”

Mr. Muir said, “I encourage other people who want to do something new and continuing study in mechanics [to register]; it’s good for them. Education is a must. You need to know your stuff.”

Mr. Harrigan said he would recommend the courses because of the variety of different paths available in the field.

“The marine industry is big, wide industry,” he said.

This article first appeared in the Beacon’s May 17th print edition.