If Road Town floods again, as it did during the tropical wave of August 2017, some residents and business owners will be armed with new tools to help mitigate the …

END_OF_DOCUMENT_TOKEN_TO_BE_REPLACED 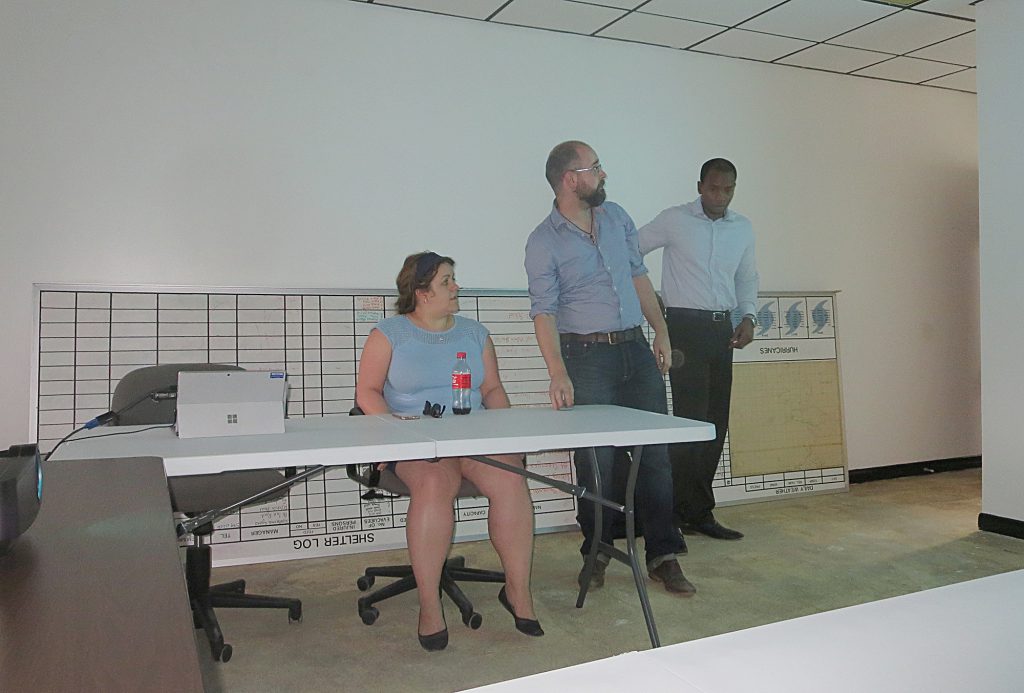 Jeremy Hodge, deputy permanent secretary in the Ministry of Communications and Works, presents the results of the Road Town hydrology study alongside consultants from Amec Foster Wheeler. Photo: CLAIRE SHEFCHIK

If Road Town floods again, as it did during the tropical wave of August 2017, some residents and business owners will be armed with new tools to help mitigate the impact, thanks to a new hydrology study conducted by the Department of Disaster Management and the United Kingdom-based consulting firm Amec Foster Wheeler.

Jeremy Hodge, deputy permanent secretary in the Ministry of Communications and Works, introduced the study during a meeting at the Simmonds Building in Road Town.

“It was perfect timing having this study done at the time,” Mr. Hodge said. “Most of the legwork was done before the tropical wave. We know how horrible that turned out. Part of this is having an understanding of why that happened and some of the things we can do to reduce the flooding again.”

Mohamed Tarabay, owner of Royal Shop in Road Town, acted as the local liaison for the Amec consultants.

“We cannot prevent flooding,” he reminded attendees at the beginning of the meeting. “It is a natural process and the risk of flooding cannot be completely eliminated.”

Given that, he suggested that business owners and other residents construct flood barriers such as flood shutters and flood boards. Most of these are temporary fixes, he said, but “These restrict the flow of water and are cheap, easy and work very, very well.”

“In this territory, we love concrete,” Mr. Tarabay said, adding that if property owners would consider including “permeable paving” like gravel, mulch or brick in front of their properties instead of concrete, it would go a long way toward absorbing the water and preventing major flooding.

Mr. Tarabay and the Amec consultants also listed building techniques and “simple landscape solutions” that may help, such as building new structures above flood level or building on a slope.

“A slope can help [allow] water to flow away from structures and toward drains,” said Mr. Tarabay.

Amec consultant Francesca Hurt went on to stress the importance of all businesses drafting an emergency flood plan. This step, she said, involves keeping a list of key contacts, key services and important equipment that should be protected.

“These things are important to think about in advance,” she said. “If you panic, you make poor decisions.”

Angelle Cameron, operations project manager at Harneys, attended the meeting and showed photos of a flood board she constructed in front of her firm’s building. Although some residents expressed dismay that flooding seems to be getting worse in the territory, Ms. Cameron said she saw it as a necessary evil.

“It’s the cost of doing business in the territory,” she said. “The question to ask is how do we mitigate it?”

DDM Director Sharleen DaBreo explained that the problem of flooding in Road Town is replicated across the Caribbean.

“It’s just the way the islands were developed: on the bottom of the hill. It’s not going to be fixed in our lifetime,” she said, adding that the study data will be added the national Geographic Information System to create three-dimensional flood maps of Road Town and eventually other areas.

However, Ms. DaBreo said that along with the maps goes training.

“One of the next steps for this is to engage people in the community … and make sure that they’re trained to understand the models,” she said.

This story originally appeared in the Feb. 15, 2018 edition.
{fcomment}