Local News > Study finds that mangroves will grow back

Study finds that mangroves will grow back

Clive Petrovic was disappointed by what he saw on a recent drive out to West End: the wholesale removal of a large stand of mangroves near Sopers Hole. “My guess …

END_OF_DOCUMENT_TOKEN_TO_BE_REPLACED 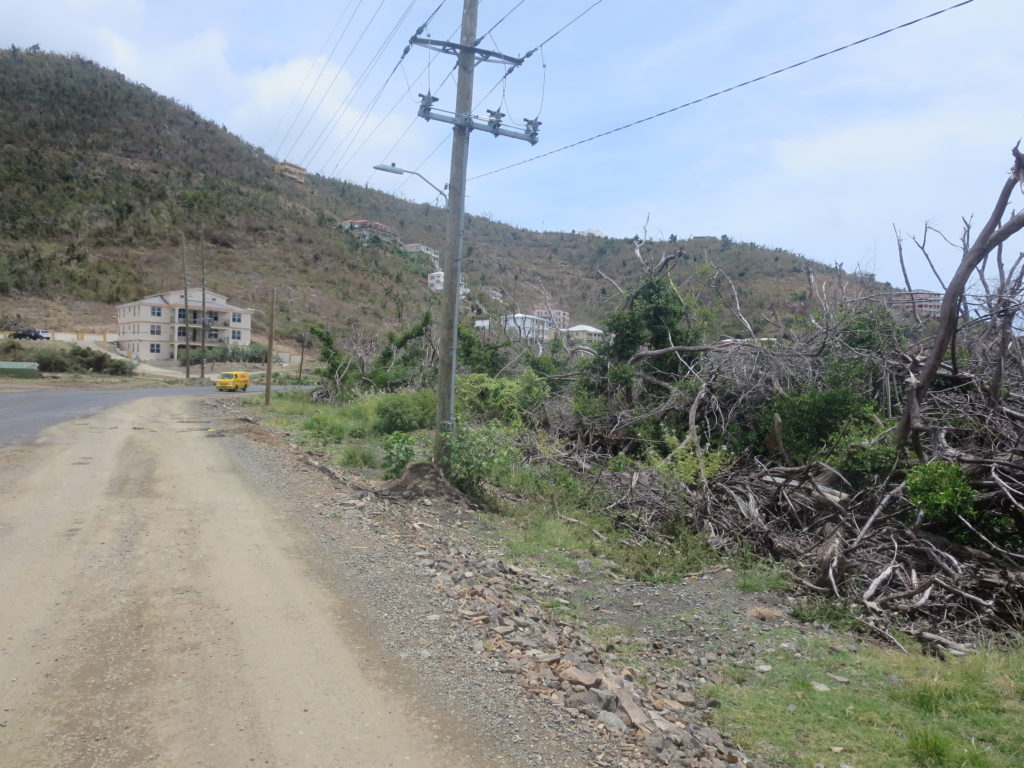 Photo: CLAIRE SHEFCHIK Many of the mangroves across from H. Lavity Stoutt Community College in Paraquita Bay are still brown. Though many mangroves across the territory were killed during last year’s hurricanes, scientists say the dead trees help foster new growth and shouldn’t be removed.

Clive Petrovic was disappointed by what he saw on a recent drive out to West End: the wholesale removal of a large stand of mangroves near Sopers Hole.

“My guess is that work crews ‘cleaned up’ the shoreline after the storm,” said the ecologist, who lectures at the H. Lavity Stoutt Community College Marine Centre. “It is true that severe hurricanes will kill mangroves. But it is individual trees, not the forest, that is killed.”

A recent assessment confirmed this, and experts are urging residents to avoid cutting standing mangrove deadwood, in order to nurture the growing young plants beneath.

In early April, with the help of boats and drones, coastal restoration ecologist Dr. Gregg Moore of the Jackson Estuarine Laboratory at the University of New Hampshire carried out a series of rapid mangrove assessments to see how trees on seven islands had fared after Hurricane Irma.

For the mature trees, the news was grim.

“The assessment confirms what BVI residents and visitors to the territory could probably already guess: At least 90 percent of all the mature red mangrove trees that form the coastal fringing system have been defoliated and are dead,” Susan Zaluski, director of the Jost Van Dykes Preservation Society, which organised the assessment, said in a press release.

She added that this situation represents a serious blow to the ecosystem because it harms the flowers and fruits of the next generation.

Dr. Moore assessed mangroves on JVD, Tortola, French- mans Cay, Beef Island, Great Camanoe, Virgin Gorda and Prickly Pear islands with the goal of planning their restoration. Ms. Zaluski said this was important, because mangroves are too important to the ecosystemto be ignored.

“Mangroves are the dominant coastal vegetation of low energy coastal areas in the Caribbean,” she said. “Mangroves provide countless benefits to nature and humans.”

She added that the trees act as nurseries for fish and help nurture coral reefs, as well as improving water quality by providing barriers against runoff from land and storm surge from the ocean.

As dead mangroves decompose, they release energy and return essential nutrients and carbon to the earth. Their structure protects animals and helps nurture mangrove seedlings that will eventually restore the forest.

“The storms act as a reset button for the habitat,” Mr. Petrovic said. “The dead trees just get recycled. There will be greater biodiversity as a result.”

Despite the bad news, some areas, including Virgin Gorda’s North Sound, maintained mature trees that have begun to flower.

“These will be important sites for sustainable recruitment of plant stock for restoration and conservation efforts,” Ms. Zaluski said. “Foot traffic and dragging of cut wood by workers threaten to trample or damage fragile seedlings, and … those established seedlings are more valuable than ever now.”

More importantly, even the so-called “dead” mangroves will eventually come back. Ms. Zaluski pointed out that most sites the researchers visited had a significant understory of live, rooted seedlings.

“It is a natural process,” explained Mr. Petrovic. “Once the large trees die, they no longer shade the understory. So seedlings on the ground previously inhibited by shade now have full sun and begin to thrive and grow. Go look anywhere there are dead mangroves. You will find lots of baby mangroves already growing.”

For instance, Dr. Moore’s survey of Bakers Bay on the east coast of JVD showed damage to the fringing red mangrove. But on a closer look, he found a new understory of red mangrove seedlings that were safely nestled underneath.

“Albeit quite young and short today, these young plants are the future of BVI’s mangroves and should be carefully protected,” Ms. Zaluski said.

Mr. Petrovic pointed out that even before Irma, the mangroves were in danger. “Perhaps 90 percent or more of the original wetlands on Tortola have been destroyed,” he said. “The recent hurricane has only accelerated that process. What’s needed is education and the willingness of government to restrain the continued reclamation of mangrove wetlands.”

He added that people need to look beyond the tangle of dead or near-dead trees and realise that they are slowly coming back to life, but this process may take time.

“They think the forest is dead and use that as an excuse to ‘reclaim’ the coast,” he said. “I see it going on every day.”

Dr. Moore is compiling his findings in a report to be shared with government and the public, and plans to return to the VI in the fall of 2018 to conduct a United Kingdom Darwin Plus-funded project focusing on habitat resilience.

Mr. Petrovic said that one of these will involve him, Ms. Zaluski and other experts collaborating on creating a mangrove nursery near HLSCC in Paraquita Bay.

He added that although mangroves survive well in salty environments, “it’s a marginal existence for them. They actually do better with care. Using the best available technology we have … [the plan is to grow] as many and as quickly as we find feasible, and then replant them.”

Many locations on Tortola and JVD have been identified for replanting, he added.

The Paraquita lagoon, he said, is perhaps the most important remaining mangrove habitat on Tortola.

“It’s a fairly large mangrove ecosystem and there aren’t many of those left,” he said, adding, “Different people have different priorities as to where they should go.”

“Of course, it will take years, even decades, to restore the forest to pre-hurricane condition,” Mr. Petrovic said. “But, that’s okay. It is part of the natural cycle and merely a blip in the many-century life of a forest.”