On a recent Monday afternoon in the Multi-purpose Sports Complex, several children took off their shoes and tossed them in a pile. Then they split into teams and turned their …

END_OF_DOCUMENT_TOKEN_TO_BE_REPLACED 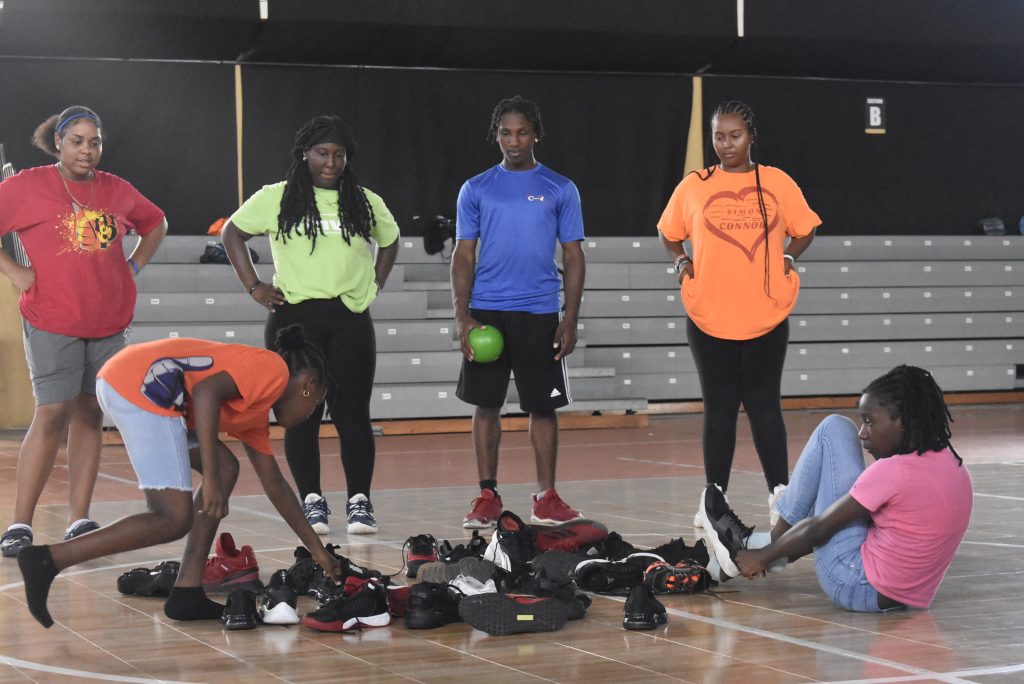 Participants in the Youth Empowerment Project’s summer camp in Road Town compete in a race to put their shoes on as quickly as possible. This year was the first that YEP held a camp in the capital in addition to the one it holds annually at its East End headquarters. (Photo: SARIAH LAKE)

On a recent Monday afternoon in the Multi-purpose Sports Complex, several children took off their shoes and tossed them in a pile.

Then they split into teams and turned their attention to Coach Carldon Morton. When he gave the go-ahead, they ran to the pile one at a time, found their shoes, and put them on as quickly as possible.

The race was one of many team-building exercises held in recent weeks as part of the first summer camp in Road Town hosted by the Youth Empowerment Project, which has held similar free camps at its East End location for 16 summers.

“It’s a tester to see whether or not the community is interested in it and whether or not we can actually find support to build a [new] centre” in the capital, YEP Executive Director Stacy Mather said.

The demand, he believes, is high. By adding the Road Town camp, the YEP summer programme more than doubled its size this year with the help of the Rotary Club of Tortola and other sponsors.

About 120 students attended in Road Town and about 100 attended in East End, making the YEP summer programme the largest in the territory, according to Mr. Mather.

But many other children were turned away for lack of capacity.

“In East End for the last 15 years, we’ve had to turn away in excess of 60 to 80 children per year during our summer camps, and that’s just those who actually formally apply,” he said.

In Road Town this year, he added, the unmet demand was even higher.

“We anticipated and were only targeting 100 children, but we had over 220 applications,” he said. “So undoubtedly based on the numbers and the enrollment demand, right, we know that there is a need for pro- grammes in the BVI that offer free — first of all free — but also a certain level, a certain quality, of programming for children.”

Duration is also important, he said, noting that the YEP programmes ran for about two months.

“That gives parents the ability to have their children enrolled in a programme for a lengthy duration,” he explained.

In recent years, Mr. Mather noted, free after-school and summer programmes hosted by government have been in short supply for the ages targeted by YEP. He believes the 2015-2019 Virgin Islands National Youth Policy, which targets ages 15-29, may have refocused government’s priorities on older children.

Related issues have been exacerbated since 2017, when hurricanes devastated the territory’s infrastructure, according to Mr. Mather.

“Our children are still reeling in my opinion where that’s concerned in terms of education and recreation, but also where youth development is concerned,” he said. “The programmes that have been established over the last couple years are there, but they’re paid programmes. … And coming out of Covid and everything, we know the economy in the BVI has had its struggles.”

Moving forward, he believes a free programme like YEP is needed on a “national level” in the VI.

“The children are my customers. What must be done must be done for them,” he said. “There needs to be a programme in the BVI that is done on a national level. … The question is whether or not the community cares enough to do so.”

This year, the YEP camps started July 5 and ended yesterday in time to allow time for back-to-school preparation.

Shawn Smith, whose two sons took part, said he would recommend it to other parents.

“They learn crafts, arts, get to interact with other kids, and it builds their self-esteem,” he said.

Participants agreed. Seven-year-old Shailene Griffit said she has enjoyed taking part in the camp with her cousin.

“My favourite part is doing all kinds of fun stuff,” she said.

Both YEP summer camps offered various activities designed to get children “involved and out of the house,” the executive director said.

Some even went on sailing excursions, and they were encouraged to participate in team activities. The camps, Mr. Mather said, also provided opportunities for teens and young adults to volunteer and “learn responsibility.”

Other summer camps were also held across the territory in recent weeks, with many of them offering assistance for students whose parents can’t afford to pay.

The group M.A.L.E. held its usual camp but included girls for the first time since the organisation’s inception in 2014.

“The main theme behind camps like these is camaraderie. The theme is unity,” said Shammah Tittle, a longstanding volunteer.

This year’s programme — which was held from Aug. 8-19 — hosted about 90 students between the ages of 6 and 16. Twenty-seven were girls.

The idea to include girls was spearheaded by Carthy Ann Tittle, director of the female students.

“My favourite part of the programme is when we travel,” she said. Under the theme “above and under the water,” the students took part in activities including sailing, learning about the environment with Green VI, practising culinary skills, and more, said Mr. Tittle.

Some of the girls also got to practise hairstyling with local stylist Sophia Barriffe.

“It’s a programme that I think the community should get behind,” Mr. Tittle said, encouraging more parents to enroll their students and more people to volunteer. “Let’s help to shape the next generation.”

The camp ended with an awards ceremony, where Kassidy Titley and Jeremiah Hermanstyne were crowned the prince and princess.

Another summer programme was hosted by the BVI Arts Company, which is commonly known as Killi Killi.

In July and August, the camp organised two-week slots, each offering a range of activities designed to accommodate students who attended from the beginning as well as those who joined midstream. Company Director Claudia Knight said she tried to offer “something for everyone.” In the first two weeks, students presented a drama production of “The Lorax,” learning lines, painting the set, and designing the costumes themselves.

In the following two weeks, they presented a new production of different Roald Dahl stories. In August, they focused more on art projects.

Ms. Knight intends to continue this style of camp during other school holidays.
“Whenever school’s out, we are in,” she said.

She added that she pushes her students to express themselves artistically.
“I really like people to get messy, because where else are you allowed to do that?” she said.

Aria John, a recent H. Lavity Stoutt Community College graduate who volunteers with the programme, said this year’s camp was her first time working with this age group and she enjoyed the experience.

The camp was held from 9 a.m. to 3 p.m., with an optional “after-camp care” session for children of working parents.