Modeling before a large crowd is not easy, Virgin Gorda resident Andre Mars said shortly after flaunting his physique on stage at the ninth annual Summer Sizzle BVI Global Glamour …

END_OF_DOCUMENT_TOKEN_TO_BE_REPLACED 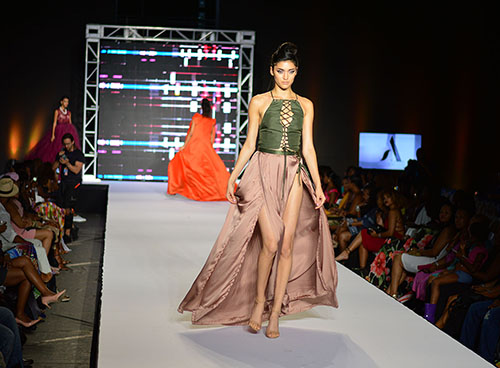 Modeling before a large crowd is not easy, Virgin Gorda resident Andre Mars said shortly after flaunting his physique on stage at the ninth annual Summer Sizzle BVI Global Glamour Runway Show on Saturday at the Multi-purpose Sports Complex.

“I’ve prepped all year round and I’ve been training hard,” Mr. Mars said of the fashion show, which featured dozens of models from here and abroad. “I gained 30 pounds of muscle and then I started to cut down. I ate more of a protein-based diet.”

The hard work paid off. As the model strutted down the long runway in a swimsuit, female attendees cheered loudly.

Other male and female models drew similar reactions during the nearly-three-hour-long show, which brought an end to three days of Summer Sizzle fashion events that began last Thursday.

About 10 designers — including Akeem Stanley, Andrea Wilson and Nadia Winter from the Virgin Islands — displayed their pieces at the Saturday show, which is organised annually by event producer Terry Donovan.

“It was absolutely fabulous,” said Janette Brin, former head of the Miss BVI Pageant Committee. “Congratulations to Terry Donovan for keeping it going, staying positive, confident and motivated to bringing this level of fashion to the British Virgin Islands.” The pageant has continued to improve each year, according to the regular attendee.

“It has grown tremendously over the years,” Ms. Brin said. “Every year I’m impressed with the level of creativity, the very inspiring designs. I’m never bored with the designs.”

“I came to the very first Summer Sizzle nine years ago, and I hosted Summer Sizzle twice, so this is somewhat of a reunion for me,” said Mr. Steingold, who came to the show from Los Angeles just for fun this time. “The first show was half car show, half fashion show, and it was in a muddy parking lot. It is fantastic to see how the show has evolved to being in such a beautiful venue.”

“The BVI Tourist Board is busy trying to promote events, and Terry has done a wonderful job bringing this calibre of fashion here,” Ms. Flax-Brutus said. “I think the models did very well.”

“Akeem is amazing,” Ms. Brin said. “He was actually an emerging designer last year, and I think this year he has definitely demonstrated his passion and his whole heart into it. He believes in what he’s doing, and I think everyone got that message that he is someone to watch as far as designers are concerned.”

Roy Butler, who owns a modeling agency in Texas, attended the event for the first time.

“I came as spectator this year to view and see what it’s like,” he said. “It was amazing, and I think next year I’ll bring about 15 models with me.”