Survey collects info on 300-plus layoffs

END_OF_DOCUMENT_TOKEN_TO_BE_REPLACED 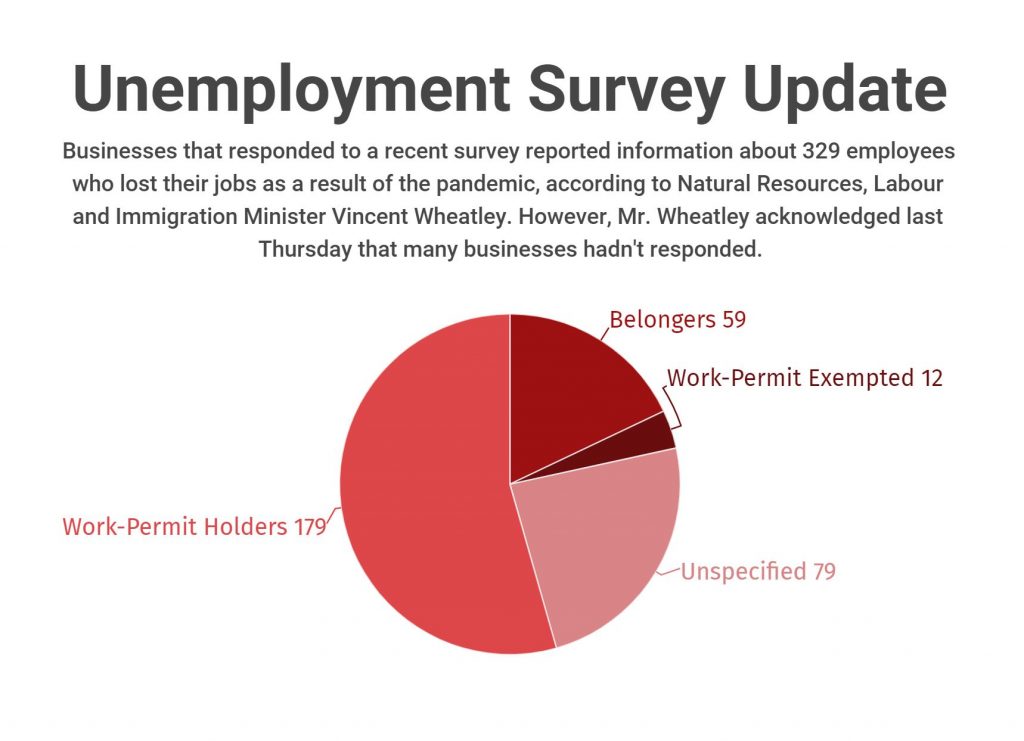 A recent survey of businesses in the territory provided information about more than 300 of the workers who have lost their jobs because of the Covid-19 pandemic and the ongoing lockdown.

The number, however, likely represents only a small fraction of the total number of unemployed residents, and government is urging more businesses to provide information.

Natural Resources, Labour and Immigration Minister Vincent Wheatley reported last Thursday in the House of Assembly that many businesses are trying to figure out their next moves amid the uncertainty about how the pandemic will unfold.

The minister noted that businesses are being affected in different ways and thus have been responding differently. He said some closed businesses have implemented complete staff layoffs, while others are still offering employees full pay.

“In order to get a full understanding of the effects of Covid-19 on our territory’s workforce, we have asked all businesses to submit a report on the state of their operations,” he said.

Businesses that responded reported that they laid off or “released” a total of 329 employees. Of those employees, 179 were work-permit holders, 59 were belongers, 12 were work-permit exempted and 79 weren’t specified.

A sample workforce assessment data spreadsheet available on the government’s homepage gives three options for each employee’s status: retained, released or laid off. For those who were laid off, the ministry is asking businesses to provide a rehire date. It also asks if each employee is currently located here or abroad; if he or she has seen a cut in hours and salary; and if the position was full- or part-time.

Mr. Wheatley did not specify how many businesses responded to the survey or how many employees they kept on board.

However, this figure isn’t comprehensive because some employers are still determining the best way forward, Mr. Wheatley said. He also encouraged businesses that have retained their entire staff to respond in order to give a full picture of the impact on employment.

Though the survey covered 329 employees, that number likely represents the tip of the unemployment iceberg.

Scrub Island Resort alone recently furloughed nearly 90 percent of its 300 staff members, and The Moorings — which employed more than 250 people before Hurricane Irma but hasn’t provided more recent figures — reported laying off “a majority” of its staff for at least 12 weeks.

As for employees who lost their jobs because of the pandemic, Mr. Wheatley said the department is also working to extend work permits.

“The department foresees and expects large numbers of persons who may have been terminated opting to seek permission to remain in the BVI while seeking alternative employment as their work status would have been affected,” he said. “There are no easy solutions, but the department and ministry will play its role in making this unfortunate situation as smooth as possible for these workers.”

A bulletin issued April 14 announced the survey, requesting that employers provide information about how the business functions, including hours of operation; the number of employees who have or will be “released” or retained, including their positions, immigration status and payment packages; and any additional relevant information to assist in assessing the territory’s workforce needs. More information is available on the government’s homepage at bvi.gov.vg.

Mr. Wheatley said the ministry pledges to do its best to assist both businesses and employees.

“This is a very delicate balance we are trying to strike,” he added.