Mr. Black, a former minister of education and culture, is manager of the new East End boatyard, which was opened by Autland Heavy Equipment to store and process damaged boats …

END_OF_DOCUMENT_TOKEN_TO_BE_REPLACED 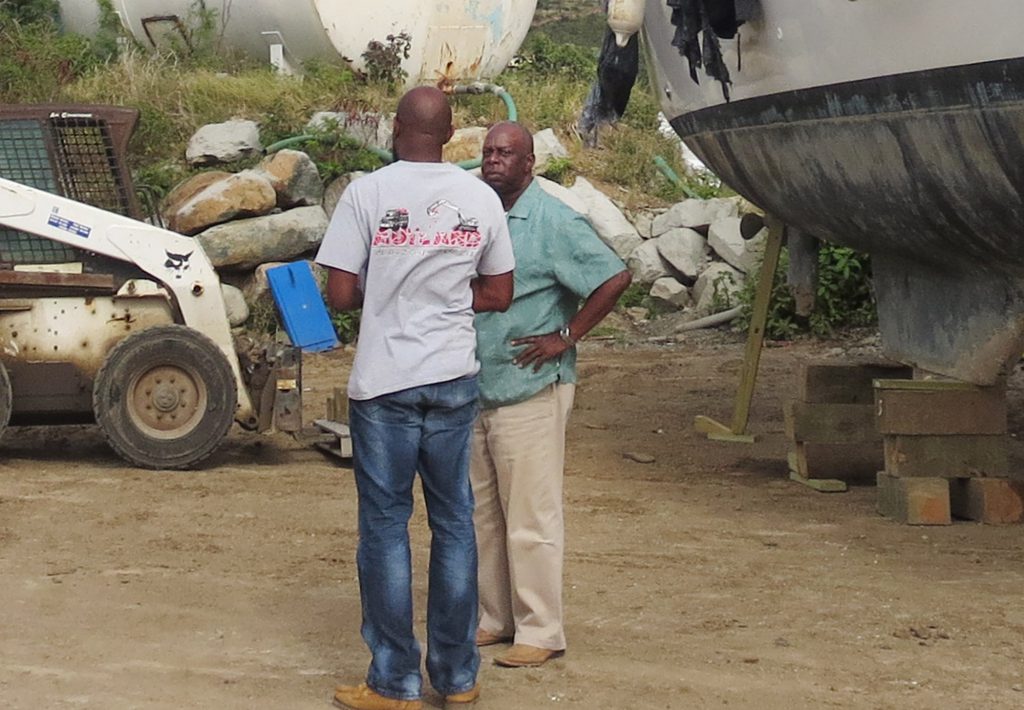 Mr. Black, a former minister of education and culture, is manager of the new East End boatyard, which was opened by Autland Heavy Equipment to store and process damaged boats in the aftermath of Hurricane Irma.

There’s an economic opportunity in rebuilding. We were approached by a number of persons who had issues with: How can we deal with storing these boats that need to get out of the water? And that’s how this whole project was created. The insurance companies were looking for options because Nanny Cay is filled to the brim. They could not take any more boats. The location [in EE] was flat, and there’s access, and so that really worked in getting this project started.

We just got started; we’ve been clearing the site out for about three to four months. But we just started hauling the boats out in earnest around the 15th of January, and we try to get out at least three to four a day on average. It’s going pretty well.

It’s a lot of work. Ultimately, by the time we get fully up and running we’ll probably have just under 100 boats to start out. We have 23 boats [so far].

[As for boatyards in the territory], we have Nanny Cay, which can hold just over 200, and that is the main commercial boatyard on the island of Tortola. We have one opposite The Moorings, and that is now controlled by The Moorings for their boats, so no person can go in there and do business. And then we have the West End boatyard, which is a very small operation. So if you want to picture possibly 2,000-plus boats damaged and we now have just under half of that on land that we can account for, it gives you an indication as to what is happening somewhere out there that we have no idea where they are, but they are somewhere out there. So that’s the scale of what we’re dealing with.

The company that brought the barge is our partner in the immediate disposal of the boats and we’re also looking to assist the government with … the derelict boats: those who are just abandoned out there and no one knows how they’re going to deal with that. So that is a project we are looking at because the logistics are different for us. Here we are just collecting them; there, we would have to go and pick them up.

That is the current process [through the Virgin Islands Shipping Registry] and I think they are trying to get some legislation and regulations. They are trying to fast track for the magnitude of the situation.

Insurance might be a consideration that you can look at, but some sort of disposal levy needs to be attached to the licensing arrangement so it doesn’t become a strain on the public purse. Even if there’s a change in ownership, that levy is there in an escrow account so that in a situation like this it is taken care of efficiently, because what we’re doing here is we’re working with an insurance company who is environmentally conscious and aware of creating an additional burden on the local environment and community. And so, yes, it’s costly, but the way to recover some of that cost with the boats that they’re going to be disposing of is to try and take off what’s valuable and sell them. In a situation like this, there will be a very large market and so the challenge for the individual uninsured person is how do they get into a network like that? And maybe a story like this can help them become aware that something is happening that can possibly assist them. As far as the price, if they have valuables on the boat, maybe they can let us have it and we can dispose of it for them. But I think a lot of people will be reluctant to come forward because they can’t afford it, so they think, “If I can stay quiet and stay under the radar and no one knows who I am, they might leave it there.” And hopefully by then they can deal with it, but it’s an immediate problem that has to be dealt with.

We’re going to continue to build. It’s not just about storage: We’re going to be doing maintenance and offering all the services that the modern boat owner would expect. These boats are expensive. Some of these yachts are over $2 million, and it gives you an idea of the clientele we are dealing with and what they would expect in terms of service. We have to put in security systems as we start bringing in newer boats and getting into our maintenance aspect and ensuring that our clients’ property is safe and secure.

As we ramp up our operation there are employment opportunities both from a maintenance point of view. The operation itself must be maintained. It’s a lot of work. When you’re a pulling out a boat you need a crew of at least six to seven persons. And then there’s simple things that they would be doing like cleaning the bottoms of the boats and painting them and ensuring our clients’ property is secure.

When you say a traditional boatbuilding community [in East End], we’re speaking about pre-1960s. Then with the advent of commerce and the way we do business and the way our lives have changed, the yachting industry started in earnest, too, around the 1960s, and that became the way employment was offered to the locals and residents. Traditional boatbuilding was made from lumber and it was hard work. It sort of started to fade away and die off, and so [yachting] became the main economic wage earner for people and it became a major tourism product. So this was the direction that the industry took. It was guided by the demand for the tourism product it brought to the territory. So what we are hoping to do here is try to bring some of them back to the community, even if it’s in a different form with some of these more modern boats. We bring some of that back to the eastern end of the island and get our young men and women into boating, sailing, into the mechanics and building aspects of the tradition that has died out, and we can also bring new life to the community.

Everything is centred in Road Town and in different parts of the island — when you look at tourism in general and you look at areas like Cane Garden Bay — we’re trying to create the same thing through what we are doing with the boatyard in this community and we think it’s going to happen. We feel confident about it.