As heavy waves battered the beach at Cane Garden Bay on Monday afternoon, Joycelyn Rhymer walked through the village’s sandy graveyard, stood facing the water, and raised a walking stick. …

END_OF_DOCUMENT_TOKEN_TO_BE_REPLACED 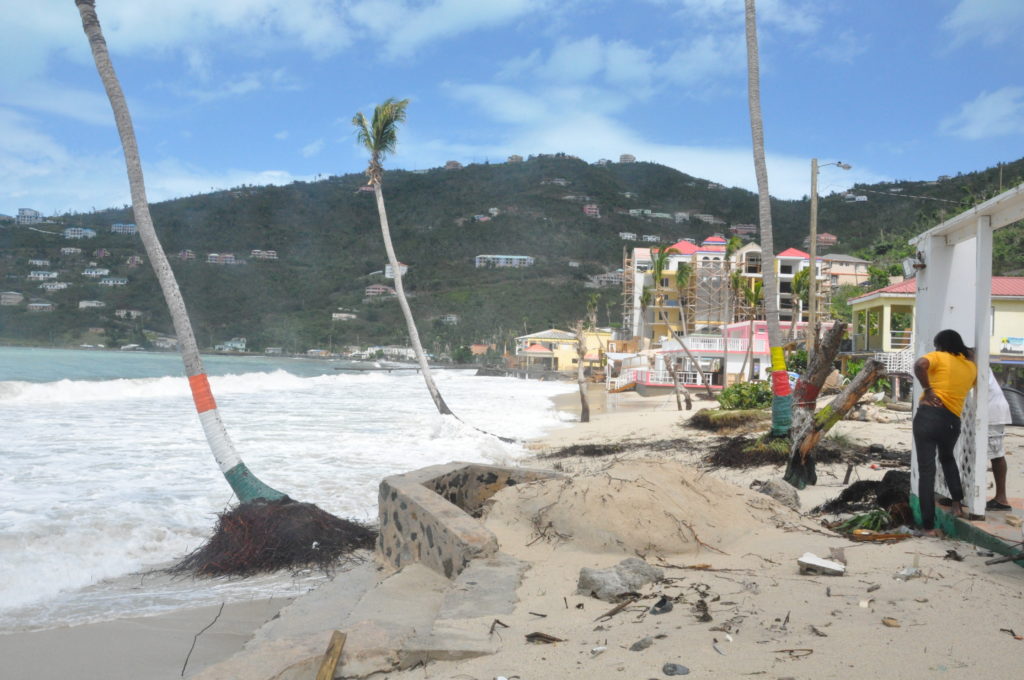 As heavy waves battered the beach at Cane Garden Bay on Monday afternoon, Joycelyn Rhymer walked through the village’s sandy graveyard, stood facing the water, and raised a walking stick.

Then she broke out in song.

“Be still and know that I am thy God,” she sang, unmoving even as water rushed around her knees and among the graves. “I am the Lord that healeth thee.”

Ms. Rhymer said she was travelling down the north coast with a friend in order to pray for the territory’s safety during one of the most powerful swells in recent memory.

From Sunday through Monday, waves as high as 25 feet brought new damage to north shore areas still struggling to rebuild after Hurricane Irma. In Cane Garden Bay, parts of the newly resurfaced seaside road had been washed away, waves were rushing around the foundations of several beachside bars, and debris that had been removed from the ocean after the hurricane was floating in the water again.

The large and dangerous swells are expected to continue to hit the territory’s shores through this week, the Department of Disaster Management reported. High surf, coastal flooding and small craft warnings remained in effect on Monday, along with the threat of 15-foot seas and breaking waves as high as 25 feet.

The hazardous marine conditions are a result of a strong low-pressure system moving over the Atlantic, DDM said.

These types of strong currents and high surf could mean possible loss of life, the agency added. “Even the strongest swimmers” could be carried out to sea, beachgoers could be injured and spectators could be knocked off exposed rocks and jetties.

Residents and visitors were warned to avoid the water, especially on the northern sides of the islands. Waves or high storm tides could also wash over the most vulnerable coastal roads.

A small craft advisory is in effect, signifying that wind speeds of 21 to 33 knots, or seas of seven feet or greater, are expected to impact certain vessels. Inexperienced mariners should avoid going out on the water, DDM said.

Death at the Baths

The Baths in Virgin Gorda was one popular destination affected by the dangerous surf conditions over the weekend.

On Friday, DDM issued a beach safety advisory notifying visitors that no mooring or swimming was allowed at the national park.

Later that night, at about 6 p.m., Virgin Islands Search and Rescue recovered the body of a 63-year-old tourist who had been visiting The Baths, VISAR board member Sergio Dantas confirmed.

The man, who has not yet been publicly identified, was touring on a charter boat.

It is not confirmed if the death was a result of dangerous sea conditions.

High swells also caused at least one ferry company to cancel its services on Monday.

“We cannot get the boats out of the marina. We have to cancel our entire schedule today,” the company posted on Facebook. “We are very sorry about that but the conditions are too dangerous! Please be safe! We will keep you posted with updates.”

At Rhymer’s Beach Bar and Restaurant on Monday afternoon, Manager Patsy Rymer sat on a barstool watching waves wash against her wide concrete patio, which was rebuilt after sustaining heavy damage in Irma.

Though the larger waves brought sand all the way up to the bar, the new structure was holding up well, she said.

“I just want it to go down,” she added with a laugh. “They say we have a week, but I don’t think it’ll be a week. … I was scared last night, but today I’m not scared.”