It was the second year of the new course for Swim and SUP the Sound, and after an early morning downpour a total of 62 racers, including six stand-up paddleboarders, …

END_OF_DOCUMENT_TOKEN_TO_BE_REPLACED 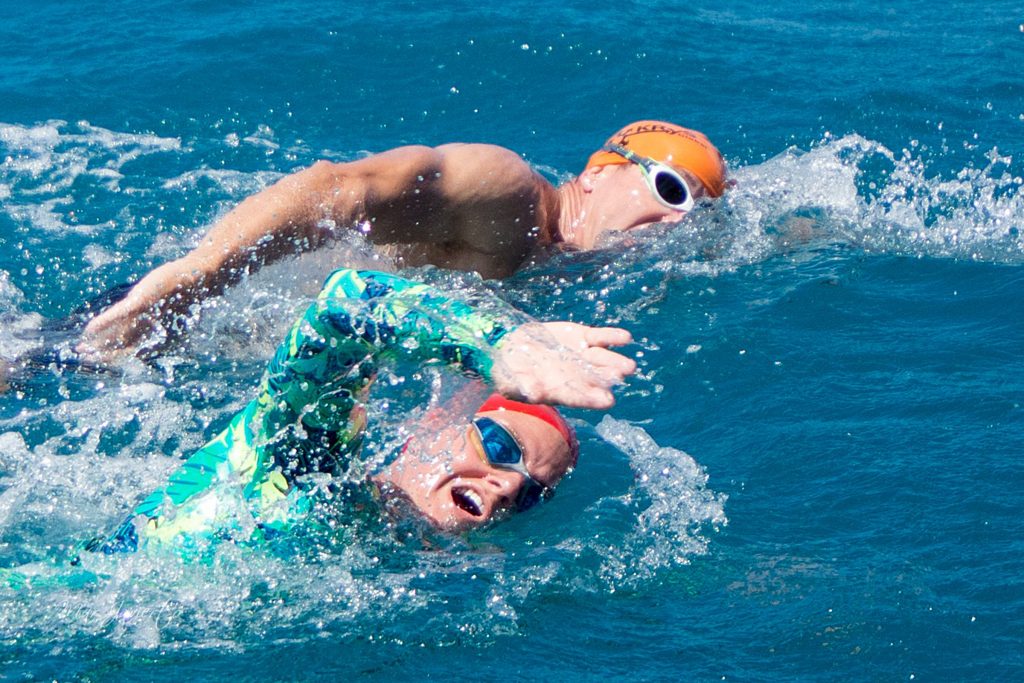 It was the second year of the new course for Swim and SUP the Sound, and after an early morning downpour a total of 62 racers, including six stand-up paddleboarders, plunged into the ocean in North Sound, Virgin Gorda, while the orange-shirted volunteers from Virgin Islands Search and Rescue cheered them along.

VISAR Operations Manager Julie Schneider recalled that at last year’s event — the first since Hurricane Irma necessitated laying out a new course — the big question was whether anyone would show up to compete in the race, which is VISAR’s biggest fundraiser of the year.

This year, with the territory back on its feet, “There’s a lot more events going on, there’s a lot more nonprofits, so everyone is supporting so many more people,” she said. “We are so grateful that there’s so many nonprofits on island that are doing such good things, but it’s getting a bit more complicated to fundraise.”

However, she said, the numbers of entrants nearly equalled last year’s. Although there were fewer paddleboarders than last year, “we’ve had a ton more swimmers than we’ve ever had.”

The race route — which now goes from Bitter End Yacht Club to Leverick Bay — had previously gone from Saba Rock to Bitter End, but the latter two resorts are still rebuilding after being nearly destroyed in Hurricane Irma.

Clinton Hempel of Carey Olsen, a sponsor of the event for the past three years, competed side-by-side with his wife Cathryn in the two-mile swim, tying for fourth place.

“They were probably a bit more challenging this year,” he said, saying the course has gotten harder since the location was changed. “There’s a bit of a cross-swim for the first three or four hundred meters, whereas previously you just jumped in and swam the channel. The last kilometer was quite choppy and challenging, surfing the waves.”

Natasha Ruscheinski of Deloitte, who claimed victory in the one-mile swim, also was declared the winner of the “corporate challenge,” and took home a magnum of Champagne.

Some of the racers came just for the experience of being in North Sound.

“We tried to make it a weekend because we wanted to give everyone a chance to get off our rock, if they’re from Tortola, and enjoy Leverick Bay,” Ms. Schneider said.

Overnight guests got a free sample of the offerings at the new Nova Restaurant and Lounge in Marina Village at nearby Oil Nut Bay, she added, then assembled at Leverick for a day of family games as the racers paddled in.

“Everyone knew exactly where they were supposed to go,” she said. “It was a little tougher this year with the wind direction, but they said they had the current going with them, so as long you went with the current it went well.”

VISAR patron Governor Gus Jaspert, after completing his first one-mile race in the VI last year, donned a Superman-themed outfit and came back for another go, though this time he didn’t quite match his third-place finish from last year.

Other competitors also had fun with their swimming gear. Elizabeth Killeen, also representing Carey Olsen, who last year appeared in a mermaid costume, made the swim in full VISAR rescue gear.

Mr. Hempel elaborated on what VISAR means to him, his firm and the entire community.

“I’m a waterman; I’ve been involved in the water all my life, so obviously you lean toward supporting them,” he said. “They are underfunded and they are the unsung heroes of the BVI. They give so much to these islands in terms of tourism and the people living here, and they need our support.”