Virgin Gorda’s Taddy Bay Airport reopened for business on Friday, Nov. 2, after having been shuttered for more than six months while it repaired its runways and sourced a replacement …

END_OF_DOCUMENT_TOKEN_TO_BE_REPLACED 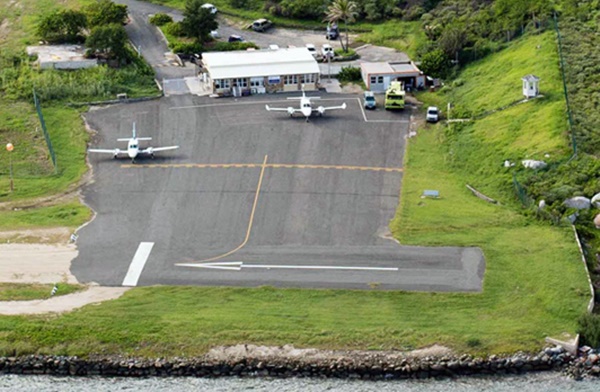 Virgin Gorda’s Taddy Bay Airport reopened for business on Friday, Nov. 2, after having been shuttered for more than six months while it repaired its runways and sourced a replacement firefighting vehicle.

“A new crash fire tender is in place and the landing strip, which was badly damaged, has been regraded and is ready to receive flights,” Denniston Fraser, managing director of the BVI Airports Authority, said in a press release. “Persons can therefore resume booking flights direct to and from Virgin Gorda.”

Vincent Wheatley, the VG district officer, said he was “very happy” with the news.

“I think it’s a very good time,” he said, adding that the closure, coupled with the continued closure of large hotels on the island, was “just one more blow” to tourism in VG after Hurricane Irma. “I knew a lot of persons from the States and Puerto Rico who [would] not come back to Virgin Gorda until the airport opened.”

Since Irma, the facility had been beset by problems, including the badly damaged runway and a firefighting vehicle that Mr. Fraser said was weeks away from breaking down after being inundated by seawater. Those issues prompted the April 22 closure, which drew an outcry from some residents. At the time, Mr. Fraser apologised, but defended his choice.

“We don’t think it’ll make another week; we’ve got to be proactive,” the managing director told the Beacon in April.

In mid-July, the BVIAA announced plans to reopen by mid-September, saying that a new “rapid intervention” vehicle had been purchased from South Carolina and was being refurbished.

“Plans for a new building to house the said vehicle have already been approved by the Town and Country Planning Department,” Mr. Fraser announced in July.

In April, he said that a replacement vehicle would cost at least $650,000- $700,000. Originally, another option being considered was to use donations to get a secondhand vehicle — likely to cost at least $300,000 — which could allow the airport to reopen in a matter of weeks. The cost of the vehicle that was ultimately acquired was not announced, and at- tempts to reach Mr. Fraser were not immediately successful.

Mr. Fraser responded by apologising for the short notice but said it would have been even shorter had the BVIAA decided to run the truck until it broke down.

All 12 of the airport’s employees were redeployed in various capacities, the managing director said at the time.

Christina Yates, the owner of Leverick Bay Resort and Virgin Gorda Villa Rentals and a partner in Yates Associates Construction Company Limited, told the Beacon in April that she blamed government “incompetence” for the failure to fix the engine on time. She called the sudden closure “disgusting.”

“I am sure that a fire engine could be found somewhere to keep it open if that’s what it is,” she said.

On Tuesday, Mr. Wheatley spoke similarly.
“It was unacceptable,” he said. “They could have given us advance notice. Some people had flights booked. The sudden closure affected a lot of persons.”

However, he was pleased that the airport, after opening Friday, was in full swing on Saturday, already heralding what he thought was bound to be a surge in visitors to the island.