As Virgin Islands chef Ariq Flax-Clarke garnished samples of coconut-flavoured risotto with micro-greens during Taste of Virgin Gorda on Saturday night, emcee Angelle Cameron narrated with the help of a …

END_OF_DOCUMENT_TOKEN_TO_BE_REPLACED 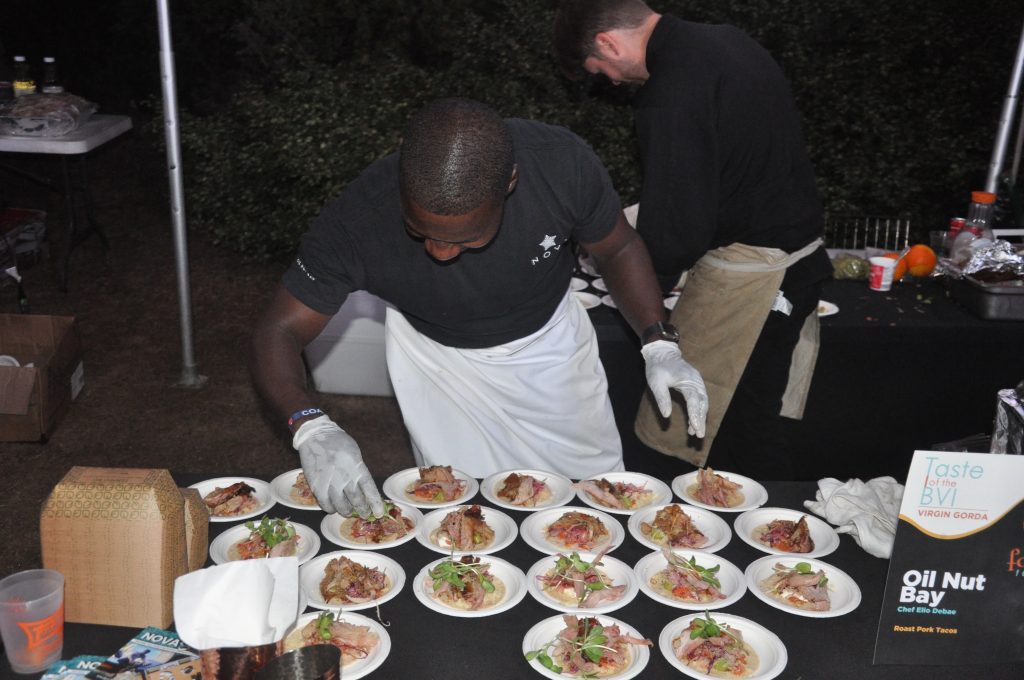 Chefs from Oil Nut Bay roasted a pig and served up mini pork tacos at Taste of Virgin Gorda. Their table was among more than a dozen offering various samples. (Photo: FREEMAN ROGERS)

As Virgin Islands chef Ariq Flax-Clarke garnished samples of coconut-flavoured risotto with micro-greens during Taste of Virgin Gorda on Saturday night, emcee Angelle Cameron narrated with the help of a wireless microphone.

“Not only is it about combining flavours, but it’s also a little bit of artistry,” Ms. Cameron told a crowd of about 40 people, many of whom were hoping for a sample at the end of the cooking demonstration. “You must be able to add hype, colour and depth to your meals.”

Mr. Flax-Clarke, a 22-year-old in his third year at Johnson and Wales University in Miami, was one of three chefs who gave a cooking demonstration at the event, which is part of the annual BVI Food Fete.

Nearby, more than a dozen other chefs from here and abroad served up samples for hundreds of attendees under a row of tents.

“Overall it was a success,” said Chandi Trott, the assistant public relations manager for the BVI Tourist Board, which organises the Food Fete each year. “It was very attractive event that highlighted culinary tourism in the BVI.”

Ms. Trott said more than 300 people attended, many of them arriving on a ferry from Trellis Bay that returned at about 11 p.m.

“This has always been well supported — this event in particular,” Ms. Trott said.

Taste of VG was held for the second time in a large field on the Toad Hall property that government plans to purchase for a national park.

“It’s a great venue: lots of space,” Ms. Trott said, adding that a large boulder flanking the stage provided a good backdrop for the performers, who were headlined by jazz saxophonist Arturo Tappin.

This year, organisers made a special effort to highlight female chefs.

Among them was Puerto Rico chef Maria Mercedes Grubb, who served samples of a salad she said was inspired by “the typical roadside shrimp cocktail” popular in her native island.
“It’s something that’s cold and chill and you eat it next to the beach,” said Ms. Grubb, who in 2013 worked with her brother to open the Gallo Negro restaurant and whiskey bar in the up-and-coming neighbourhood of Santurce near San Juan. “So my version is a little bit Greek. It has a Greek vinaigrette, some Kalamata olives and the pita.”

At the next table, Karina Rivera, the head pastry chef at the Chinese-Japanese restaurant Novikov Miami, was serving a dessert.

“It’s a coconut mousse, coconut crumble, piña colada cream, and pineapple — with Malibu,” said of the samples she served in clear plastic cups.

Last year, the Mexico native founded the organisation Women Chefs 305, which advocates for gender equality in the Miami food and beverage industry.

She was attending the VG event for the first time.

“We’ve been having a great time since we got here,” she said. “It’s been an adventure.”

‘The food is fabulous’

Later in the evening, Maureen Yancey, a technical consultant who lives in Atlanta but visits VG two or three times a year, sat at a table near the stage chatting and watching a band perform.

“The people are wonderful; the food is fabulous,” said Ms. Yancey, who was attending Taste of VG for the fourth time. “For anybody who has not been to Virgin Gorda, the restaurant selection is awesome. For it to be such a small island, you have such a wide selection of restaurants to choose from.”

The samples offered by Chez Bamboo — which ranged from sushi rolls to fried rice — were among her favourites, as were the desserts served up by the Little Dix Bay team.

“I truly feel like home when I come here,” she said.

“I was particularly impressed with Oil Nut Bay and their pig roast,” she said of a team serving bite-sized gourmet pork tacos. “They set it up on the day of the event, and we didn’t expect that. They really delivered.”

The BVI Food Fete continues this weekend with the Anegada Lobster Festival on Saturday and Sunday. For more information go to bvifoodfete.com.