The Virgin Islands is a more well read place thanks to teacher H. Lynden Smith’s passion for the written word — and on Friday, she was recognised by the Queen …

END_OF_DOCUMENT_TOKEN_TO_BE_REPLACED 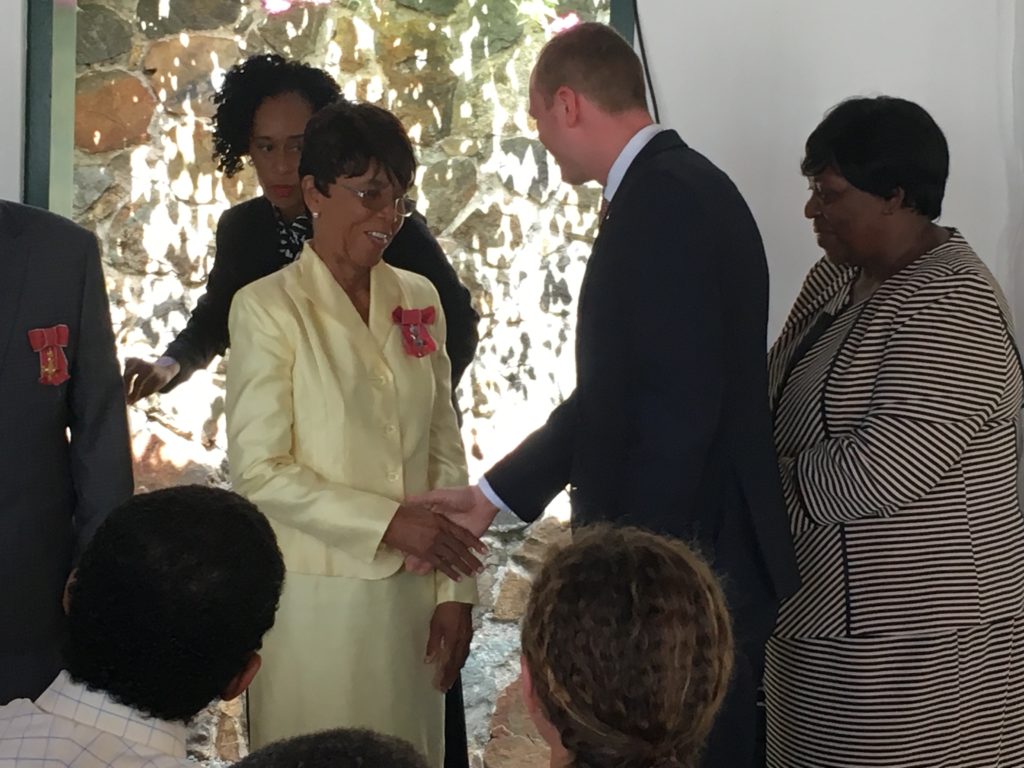 The Virgin Islands is a more well read place thanks to teacher H. Lynden Smith’s passion for the written word — and on Friday, she was recognised by the Queen for her efforts.

In a ceremony at Government House, Governor Gus Jaspert declared her a Member of the Order of the British Empire, an honour that recognises those who have made achievements in public life; committed themselves to their community; or been outstanding at their profession.

“Over the past 47 years, [Ms. Smith] has touched the lives of numerous young people in the Virgin Islands” through her “wide-ranging contribution from teaching early education, principal, and then to education officer for reading,” Mr.Jaspert said.

In her remarks, Ms. Smith, who is known affectionately as “Teacher Lynden,” said her love of books began young, when her parents Alvanley Frett and Alice Frett-Turnbull regularly read stories aloud to her.

“It was in their modest home that my passion for reading and literacy was planted,” she said.

She went on to earn a degree in the United Kingdom and Puerto Rico, beginning her career in 1956 at the East End Methodist School, her alma mater. And almost from the start, she realised she wasn’t satisfied with the reading material students were being given.

“We were teaching children to read but it was a bore,” she said. “They would tell you that. We needed … different books than the ones that were assigned to us … so the children would learn to love reading.”

Those were the seeds that led her to launch, in 1992, Reading is Fun Week, which continues to be annual event.

She also founded the BVI Reading Council, an organisation devoted to fostering literacy in the community.

“Literacy [is] our goal for all,” she said.“Little, big, everybody.”

The organisation sponsors the International Literacy Day award, which goes to a student who has shown extraordinary progress in the face of challenges.

“I wanted to reach everybody in the territory,” she said of the organisation. “At that point, many parents were not reading with their children, and especially dads.”

This resulted in the Dads Reach Out and Read Programme. She extended the reach of literacy even further with the Books for Babies programme, through which new mothers are sent home with books to read to their infants.

She also played a part in the founding of the East End/Long Look Community Library, which continues to be one of the two libraries currently operating in the territory after Hurricane Irma.

Shortly before the hurricane, she teamed up with two of her friends in the United States to organise a book drive, which led to thousands of books being donated to schools across the territory.

“Unfortunately, the hurricane came, and you know what happened,” she said. “I think they’re still working on sending some more.”

At the ceremony, Ms. Smith thanked the many volunteers who worked with her over the years.

“Today is a moment I never expected, nor did I reach it on my own,” she said.

Many of the volunteers attended the ceremony, along with Ms. Smith’s family, former colleagues and students. She has been married to her husband Harold Smith for 57 years, and has three sons, 13 grandchildren and 16 great-grandchildren.

Janette Brin, who was involved in many of Ms. Smith’s initiatives with the Reading Council, described the teacher as her “second mother.”

“Very loving, very caring,” Ms. Brin said.“She’s very pure in what she does, just in terms of making sure that everyone from all walks of life …can never take for granted the importance of reading and writing.”

“Some of the students could not read, so I used to spend some time helping them read in order to understand geography,” he said.

“Teacher Lynden’s compassion for others, her instinctive sense of what needs to be done and her willingness to give of herself to achieve a better world serve to mark her out as someone who represents the very best of
this community,” he said.