“Hey! The assembly tent is over there!” Zakaria Yunusah, a seventh grade teacher at Elmore Stoutt High School, yelled to a group of wayward students shortly before their weekly general …

END_OF_DOCUMENT_TOKEN_TO_BE_REPLACED 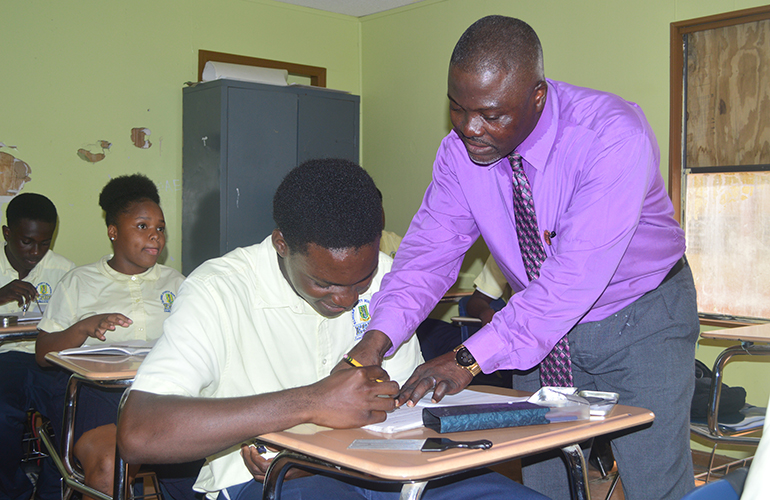 Zakaria Yunusah interacts with students at the Elmore Stoutt High School on Monday, when a Beacon reporter spent the day with him. Mr. Yunusah was named Teacher of the Year during a gala held on Saturday at the Multi-purpose Sports Complex. Photo: NGOVOU GYANG

“Hey! The assembly tent is over there!” Zakaria Yunusah, a seventh grade teacher at Elmore Stoutt High School, yelled to a group of wayward students shortly before their weekly general assembly started at 8:45 on Monday morning.

Then he walked to the tent, where most other students were already seated, and approached a pair standing near the back.

“Follow me: I have a special seat for you,” instructed the mathematics teacher, who on Saturday night was named Teacher of the Year by the Ministry of Education and Culture.

He then led the two students to empty seats near the stage.

As the morning assembly got under way, Mr. Yunusah walked around ensuring that students were attentive.

“Hey! Mr. Smith there: Be quiet,” he said to a seventh grader who was talking while Vice Principal Donna Clyne-Thomas spoke.

After the assembly, Mr. Yunusah continued with his good-natured discipline as he walked back to his classroom. Students didn’t seem to mind.

“This is just a normal day for me,” he said. “This is something I’ve been doing since I started my career as a teacher right from St. Lucia. To have impact on the children, first and foremost, you have to love them. Secondly, if you love them, any correction you want to do to them, they know you don’t mean it in a negative way, but rather a positive way.”

The Ghanaian’s day is hectic, but he wouldn’t have it any other way, he explained as he eyed a group of students headed his way.

“Teaching is not for everybody. If you decide to become a teacher, you have to have patience, you have to have love, and you have to care,” said Mr. Yunusah, who lived in Cuba before migrating to St. Lucia and then the Virgin Islands. “If you don’t have these qualities, you’re wasting your time.”

First class
The father of one, who has taught at ESHS for about 11 years, displayed that patience during his first class of the day.

At around 10 a.m., about 20 students filed into his trailer classroom, the walls of which are decorated with motivational posters.
“The mind is like a parachute: It functions only when you open it,” one of them read.

Another proclaimed, “I teach to empty my mind and to fill my heart.”

A couple minutes into the class period, most of the students were still unsettled, but the 21-year teaching veteran wasn’t ruffled.

Then he launched into a brief motivational session as he does at the start of each class, warning his students about slacking in discipline as the term comes to an end.

“I also want you all to keep your head up and stay out of trouble,” he advised, “because whatever suspension you get, you’re going to do it when school reopens, and it’s going to affect you.”

Soon, the class was interacting about the topic of the morning: mathematical sets.

“A set is a collection of items, and they must have the same qualities,” he explained.

Though the material was complex and technical at times, he interspersed his explanations with jokes.

Students played along, noticing at one point that Mr. Yunusah’s active teaching style meant he was the only one in the classroom sweating.

“Teacher, do you repeat outfits?” a student asked.
“No, I throw them all away or donate them to Red Cross once I wear them,” he laughed.

Teacher of the Year

During Mr. Yunusah’s second class of the day, he thanked his students for contributing to his success as Teacher of the Year.

“We work as a team, and I must tell you thank you very much for all the respect that you have given me for me to reach where I am,” Mr. Yunusah said, showing off an award he received from government during a gala held at the Multi-purpose Sports Complex on Saturday night. “I know there are a lot of teachers in this school who have the same qualities, but remember: There is a race and not everyone would come first and not everyone would come last, but let us keep it up.”
Shortly before the period ended, Mr. Yunusah was called to check in with another class whose teacher had to attend to an emergency.
“Such things happen,” he said as he left his students and walked to another classroom. “Sometimes some teachers are sick or absent for whatever reason, and I have to fill in for them.”
As Mr. Yunusah approached the class, the students scrambled to their seats and acted busy.
“I’m hearing a lot of noise from this class,” he said. “Seniors are having a test, so you have to be quiet. I’m going back to my classroom: If I hear any noise or any teacher calls me to tell me you’re disturbing and you don’t give me those students making noise, you’ll be in trouble.’
But before he left, the teacher cracked another joke.
“I saw this boy riding a bicycle in East End, and he looked like a ragamuffin and his front tyre came off,” he said, poking good-natured fun at one of the students and causing him and his classmates to erupt in laughter.

But he was quick to restore order.

“All jokes aside, come, do your work,” he said. “At the end, I’m coming to check and if you have your work done, I’m going to give you an extra grade.”

“Children will come with their own problems, and if you don’t know how to go about it, you’ll think they just want to disrespect you,” he said. “You always have to think twice before punishing a child when he or she does wrong.”

Though the third period was supposed to be free for Mr. Yunusah, he was called upon to fill in for a teacher who was sick on Monday.

“Sometimes you come thinking you have a free period, but you have to cover up for some teachers who may be absent,” he said as he walked across the courtyard.
Then he turned to yell to a group who lagged as they changed classes.

“Excuse me, students, move to your classrooms,” he said. “Gianni, how are you? Come here: I’m very proud of you.”
He entered an eighth grade classroom carrying a large compass, a rulerand a sheet of paper. After settling the students, he dove right in to a lesson on geometry.

“I’ll give you the secret to passing this topic,” Mr. Yunusah said. “First and foremost, take out your compass.”

He then held up his own device and gestured to its point.

“If your pencil passes this, your answers are going to be wrong,” he said.
After demonstrating how to use the compass, he taught the students to bisect lines, but not without occasional distractions. At one point, a student’s attention appeared to wander outside the classroom.

“Boy, stop what you’re doing and listen to me before I change my complexion,” the teacher joked, quickly getting the student’s attention.

By the end of the period, most of the students had mastered the lesson. Jaden McMaster said Mr. Yunusah had made it easy.

“This is the best math teacher ever,” the eighth grader said. “I like math, but not that much. It’s kind of hard. He is a good teacher.”

Shaila Winston agreed.
“To me, he’s a very unique teacher,” she said, adding, “He makes jokes in between, and that’s fun.”

That’s the way to handle teaching math, Mr. Yunusah explained as he headed to his own classroom for lunch.

“Most students, whenever they hear mathematics, they block their mind,” he said. “You cannot teach math and talk only about math. You have to crack jokes to ease their stress and pressure. Laugh is a medicine.”

Back in Mr. Yunusah’s classroom, at least 20 students had gathered to eat their lunch.
“They come here to watch television and have their lunch just to keep away from trouble.
It’s like a family,” the teacher said.
Opening up his space to students at lunchtime is very important, he added.

“If every classroom is opened for the children with a teacher sitting with them, the problem of fighting and so many things will be minimised,” he said. “I have a set of students who always come here to play games and do other things. It’s a way of having a rapport with them to know them better. Sometimes they even tell me what goes on around the school.”

But Mr. Yunusah wants to know more about what goes on.
“Very soon I’ll put security cameras in the classroom and around the classroom, so whatever happens I can see it,” he said, adding that he already has a camera monitor, which was donated.
The monitor isn’t the only item that has been donated to the teacher: He recently received 30 used computers, some of which stand on desks in his classroom.
“I get sponsorships from organisations, but when you bring things like computers you have to make sure anything electronic is registered under the government,” he said. “You can’t bring just anything into the school. People who I know — students who I have taught before or parents of students I am teaching — whenever they realise they have these things, they just call.”
Along with the computers, Mr. Yunusah also got donations of photocopiers, he explained.

“These served the whole school when there were exams last year,” he said. “Sometimes I leave here very late during exams time [after] printing papers.”

End of the day

After lunch, he taught two more classes, both of which were filled with jokes and motivational anecdotes. At the end of the final class, he sat at his desk and let out a sigh.

“That’s it,” he said. “It can be a lot of work, but when you love what you’re doing you won’t feel it a lot.”
And while the recent Teacher of the Year honour meant a lot, he added, the most important rewards of his job are intangible.

“The most rewarding thing about being a teacher,” he said, “is seeing your students excel.”