COVID-19 > From living area to classroom: How one mother teaches her daughter at home.

From living area to classroom: How one mother teaches her daughter at home.

Astrid Jones always wanted to home-school her children. So when government ordered all Virgin Islands schools to close until at least April 20 to prevent the spread of the novel …

END_OF_DOCUMENT_TOKEN_TO_BE_REPLACED 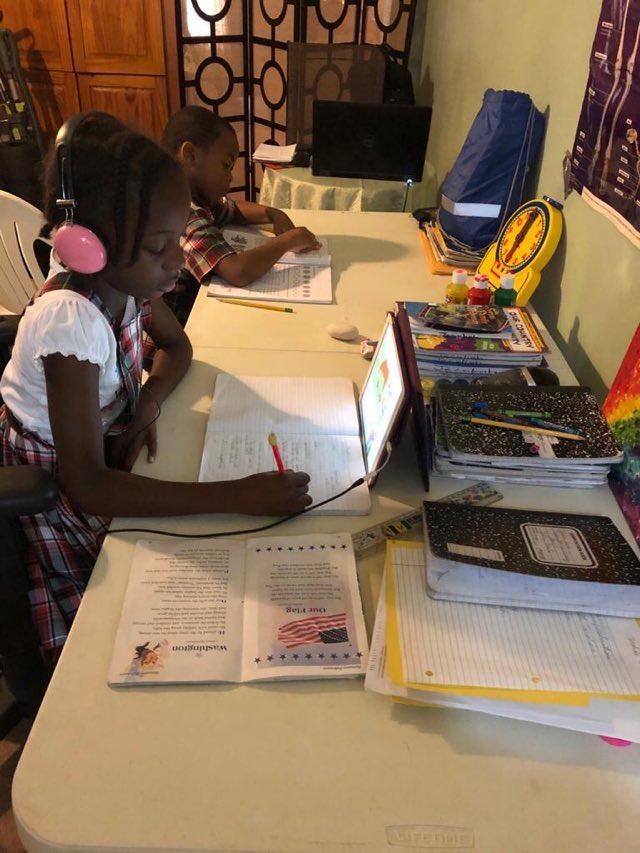 Astrid Jones’ daughter and nephew complete their school assignments side-by-side while Ms. Jones does her own work in a room nearby. (Photo: JOEY WALDINGER)

So when government ordered all Virgin Islands schools to close until at least April 20 to prevent the spread of the novel coronavirus, Ms. Jones was unfazed, and set about creating a regimented schedule for her daughter that mirrored her schedule at Agape Total Life Academy.

“It was pretty much a thought in my mind for years now,” Ms. Jones said of educating one of her three children at home. (Her two older children do not live at home anymore).

Under Ms. Jones’ guidance, her daughter starts her school-work at the same time her classes would normally commence and learns the same concepts she would normally be taught, Ms. Jones said.

The two of them have also kept their same early morning routine: They both get dressed as if readying to leave the house and make it to work or to school on time, and Ms. Jones even has her daughter wear her school uniform to her work area.

While Ms. Jones starts her work at 8 a.m., her daughter joins an hour later to begin her schoolwork, but not before they sing their morning devotions together, she said.

They both then work until noon, when, in keeping with her school schedule, Ms. Jones’ daughter takes an hour for lunch.

Following their lunch, Ms. Jones accompanies her daughter outside for a walk to the end of their driveway, and they might play a few games along the way, she said.

“It’s not so far from what she is doing when she’s in the classroom,” Ms. Jones said.

Because of the way Ms. Jones has scheduled her daughter’s school day, the new arrangement has not hindered productivity for either of them, she said.

For one thing, Ms. Jones is able to get quite a lot of work done in the hour before her daughter comes downstairs to begin her work.

What has also proved key is that Ms. Jones has set up a dedicated workspace for her daughter in a room adjacent from the kitchen, which is within eyesight of where she does her own work, she said.

Besides lunch and recess, Ms. Jones’s daughter is not allowed to leave her workroom until her school day is done at 3:15 p.m., and she is close enough to her mother to ask any questions that may arise, Ms. Jones said.

“Being sent home was exciting, but after she realised that she actually is still in school, she was not as thrilled about it,” Ms. Jones said.