With a smile on her face, Patrice Kendall watched as her daughters, wearing neon swimming caps and clutching kickboards to their chests, lay on their backs and kicked the water …

END_OF_DOCUMENT_TOKEN_TO_BE_REPLACED 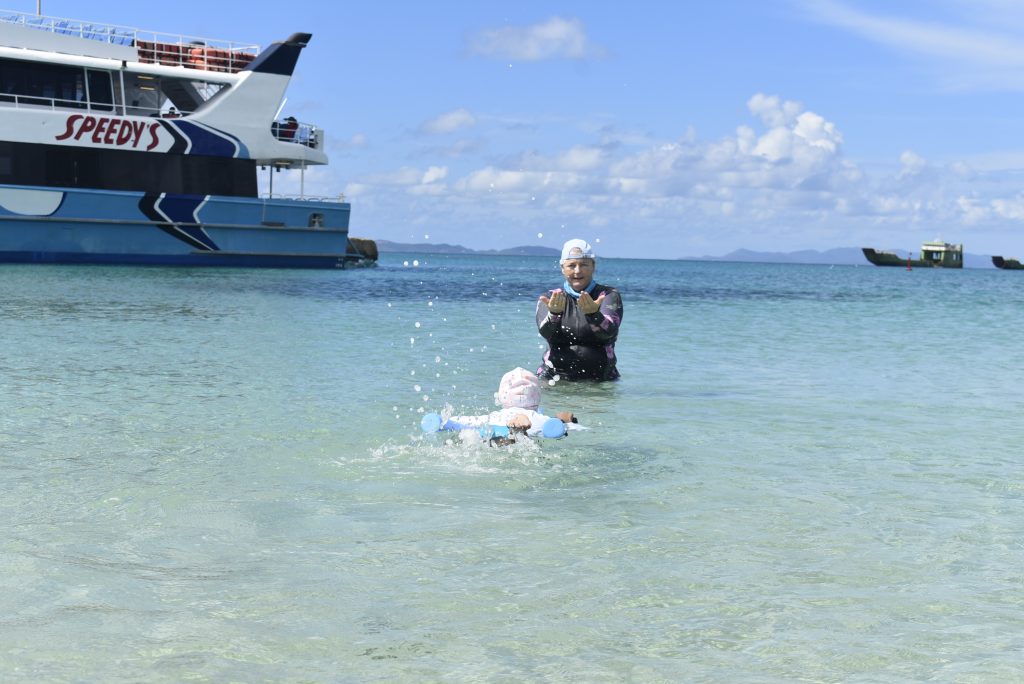 Over the course of a recent Sunday morning, with the help of games, pool noodles and “rocket boats”, Rebecca Nockolds and her mother Phillipa Exton helped approximately 25 kids learn how to swim. (Photo: JOEY WALDINGER)

With a smile on her face, Patrice Kendall watched as her daughters, wearing neon swimming caps and clutching kickboards to their chests, lay on their backs and kicked the water to propel themselves forward.

It had been roughly a year since their first swimming lesson, Ms. Kendall said, and she was proud of their progress.

Her daughters were among about 25 children who attended swimming classes Oct. 10 in the clear blue water next to the Virgin Gorda ferry dock as part of a summer programme of free lessons offered by BVI Swim School, which is run by Rebecca Nockolds and her mother Philippa Exton.

With funding from Unite BVI and support from a variety of businesses and organisations across the territory — including some hotels that have offered free accommodation when the pair takes their lessons to the sister islands — last year Mses. Nockolds and Exton traveled to three islands to help 90 children improve their skills in the water.

This year, by the time the programme wraps up with an October trip to Jost Van Dyke, they’re hoping to have taught nearly 200 kids across four islands, Ms. Nockolds said.

By eliminating cost as a barrier to entry and asking for donations from parents, the pair hope to reach some families who may not be able to otherwise afford such lessons, though Ms. Exton said that she has been amazed by how generous residents have been given the struggles many are experiencing as a result of the coronavirus pandemic.

The duo’s lessons are not the only venue for VI kids to improve their swimming.

In the 1970s, Julie Swartz, the managing director of Green and Clean VI, started pitching in with the swim lessons then being taught in St. Thomas Bay by Gene Holder, a native of Colorado who became the headmaster of Valley Day School.

Mr. Holder eventually relinquished the reins to Ms. Swartz, and some four decades later, she now heads up the Virgin Gorda Fisherman’s Co-op Summer Programme, which teaches VG children the ins and outs of life on the water.

The programme was suspended this summer due to the pandemic, but it usually includes three two-week sessions: one devoted to sailing, one to swimming, and one to fishing, Ms. Swartz said.

The programme’s offerings are free, with sailors traveling from the United States to teach; equipment and training facilities offered by places like Necker Island and Leverick Bay; and swimmers certified by the Red Cross and other organisations assisting Ms. Swartz in the water, she said.

Swimming remains the most popular choice among the three sessions, with Ms. Swartz and her group of volunteers training about 150 kids each summer, she said.

After decades at the helm of this programme, Ms. Swartz admits that on some mornings, it takes extra effort to force herself down to Fischer’s Cove, where the lessons are held.

But, she said, “As soon as you get there and you see their faces when you get in the water with them, there’s a joy that just can’t happen with anything else.”

Mses. Nockolds and Exton take a piecemeal approach to their instruction, teaching their students the individual components one uses to swim and then showing them how to put it all together. On Oct. 10, each class was split into two groups, one helmed by Ms. Nockolds and the other by her mother.

To start off the first class of the day, Ms. Exton had her group warmup by showing them how to blow bubbles underwater, and then helping them float on their backs with the aid of a pool noodle.

A while later, Ms. Exton told her students to each grab a “rocket boat” — a u-shaped foam tube with handle bars sticking out the sides — that they would hold as they kicked in her direction while she slowly walked backwards.

After some splashing around with the “rocket boats,” Ms. Exton stood a short distance in front of her students, who, one at a time, stretched their arms out in front of their body, put their heads in the water, and kicked without the help of any equipment.

To minimise the risk of transmitting the coronavirus, Mses. Nockolds and Exton covered their faces with waterproof bandanas whenever they got near their students, and they sprayed all their equipment with disinfectant between classes.

Like Mses. Nockolds and Exton, Ms. Swartz separates her students into six to eight groups by age and skill-level.

When younger or less experienced swimmers need some extra attention, the more competent kids can put on a snorkel mask and go look at what’s going on beneath the surface, she said.

Few of the kids at the Sunday lessons were at that level, but Ms. Nockolds emphasised that progress can be made no matter a participant’s experience level.

She recalled a student who, during his first few lessons, was so scared that he had to be carried into the water.

But on Sunday, the young boy grabbed a pool noodle and walked right into the sea, later smiling as Ms. Exton slowly dragged a floatie he was holding through the water.

“We’ve had kids who for a year, they don’t put their faces in the water, but we teach the mother things while they’re working up their confidence,” Ms. Nockolds said.

“One day they put their face in the water and they just go for it.”

Such fear of the water is common with many of the residents the women teach, she said, adding, “There’s definitely a generational fear here that’s passed down.”

When parents don’t know how to swim, they’ll often relegate their children to splashing around in the shallows or building sandcastles, which makes it tough for the children to become comfortable in the water.

But like Ms. Kendall, Malinda Harrigan is trying to break this generational cycle.

Though Ms. Harrigan is unable to swim herself, she became inspired to learn after seeing how much fun her daughter has with Mses. Nockolds and Exton.

“She loves it. … She was excited to start back up today,” Ms. Harrigan said of her daughter on Sunday, adding, “I have a reason [to learn] now.”

Her daughter had always wanted to learn to swim, and after hearing about the summertime lessons from her job at Necker Island, Ms. Harrigan decided to sign her up.

“We live around water, so it’s good to learn how to swim,” Ms. Harrigan said.

Ms. Swartz, a Virgin Islands Search and Rescue responder who has had to rescue young people from dangerous situations, is acutely aware of the lifesaving advantages of knowing how to swim.

“Knowing that they’re safe when they go to the beach to play around … or out on a boat, that’s important to me,” she said.

Ms. Nockolds shares this goal of making the VI a more water-safe territory, a passion that was first sparked when she started volunteering with Kids and the Sea, a nonprofit that teaches water safety in the VI, at 11 years old.

Soon after Ms. Nockolds started at KATS, her mother decided to help out alongside her.

After earning their certifications, the two founded BVI Swim School while continuing to teach with KATS.

Founded in 1990 by Barbara and Tom Gerker, KATS typically hosts an eight-week session throughout the summer, with one lesson each weekend and participants asked to donate what they can, Ms. Gerker said yesterday.

Recently, Ogier and Maples and Calder signed on as sponsors, and the organisation receives some funding from Unite BVI as well, she said.

“If they want to learn how to swim, we have to take them,” she added.

As with many organisations and businesses in the territory, the pandemic has interrupted KATS’ regular schedule, but Ms. Gerker plans to have lessons start back up by the end of the month.

Like Mses. Nockolds and Swartz, Ms. Gerker extolled swimming as a skill that makes life more safe and more interesting.

“Once you’re comfortable in the water, it sparks your interest in other areas, and that’s what we like to see,” she said.

People interested in learning how to swim can contact Ms. Gerker at 499-2564 or Barbara@partsandpower.com; Ms. Nockolds at 544-7152 or rebeccanockolds@gmail.com; and Ms. Swartz at 340-7996 or Julie_Swartz@hotmail.com.