West End residents will no longer have to travel to Road Town to catch ferries to St.Thomas. The temporary West End ferry terminal officially opened on Aug. 2, welcoming its …

END_OF_DOCUMENT_TOKEN_TO_BE_REPLACED 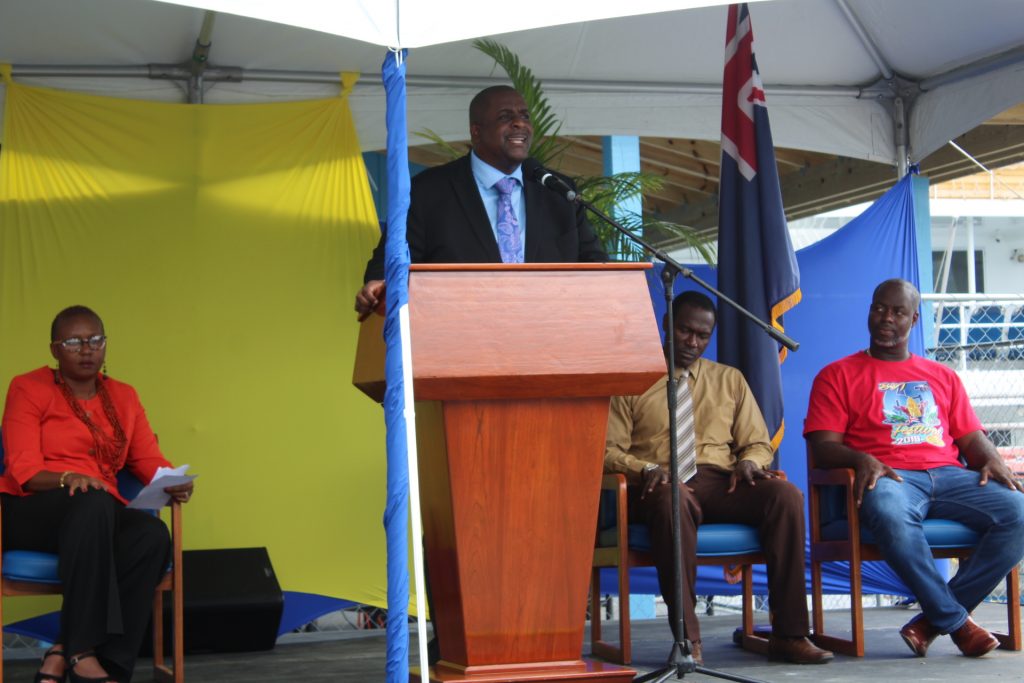 During the opening of the temporary West End ferry terminal on Aug. 2, Premier Andrew Fahie announced the return of international ferries to the facility and said the residents of his First District have been inconvenienced for too long. (Photo by: ZARRIN TASNIM AHMED)

West End residents will no longer have to travel to Road Town to catch ferries to St.Thomas.

The BVI Ports Authority built a temporary terminal to serve boats to and from neighbouring islands, including Jost Van Dyke, with the intention of eventually building a permanent structure.

Now, the terminal in West End is equipped with Customs, Immigration, and Treasury officials to handle passengers travelling from abroad.

Work on a permanent facility in West End should begin next March or April, Premier Andrew Fahie said at the ceremony.

Geraldine Ritter-Freeman, acting permanent secretary in the Premier’s Office, said, “The main entity responsible for this project today is the BVI Ports Authority: They have been responsible for making sure the temporary facility was up and running. This is no easy feat.”

The temporary blue-and-yellow-painted structure has a ramp where visitors will depart from the ferry before heading into the building and forming two lines for clearing immigration.Turning the corner, residents and visitors will then clear their belongings through customs.

Working with the available space was the biggest challenge for the BVIPA, according to Project Manager Marquese Maduro.

“When we started to construct the building, we were trying to reserve enough space so that when they wanted to build the permanent building they would have enough space,” he said. “It’s a bit small, but I think we could make it work.”

Ferries from St. Thomas will leave either from Red Hook or Charlotte Amalie, according to Mr. Maduro.

Prior to hurricanes Irma and Maria, there was a ferry to and from St. John, but since then that island hasn’t had the capability to handle international ferries.

“West End is a very important facility in terms of the volume of passenger traffic and services of private vessels,” BVIPA Managing Director Lenius Lendor said. “Whilst this is a temporary facility, the permanent one is also in the phase of design and finalisation. We are happy that we could at least open it today.”

The project was one that Mr. Fahie pushed, Mr. Lendor said.

While Mr. Fahie was on the opposition during the previous administration, he asked often about the West End terminal.

“I cannot understand how one of the greatest revenue makers was not one of the first projects to be fixed,” he told the audience at the Aug. 2 ceremony. “I know some of those who work with me say, ‘Fahie, you’re always in a rush for everything.’ I said, ‘Look, take your time, but move fast.’”

The premier also recalled his own life experiences, saying that his father was a taxi driver who would sometimes spend more on gas than he’d make in a day.

Along with the frustration of other West End residents who had to travel to Road Town to catch a USVI ferry, Mr. Fahie said he felt badly for taxi drivers of the First District who have been travelling to the capital to earn a living.

“If you open an area that generates revenue, the more revenue that makes, then the areas that need to be fixed, you’ll raise the money,” he said.

On June 3, the premier updated residents about the cost of the temporary structure, disclosing a $116,000 increase of the previously reported $239,000 budget due to payments made to
contractors and other costs. During a House of Assembly sitting that day, he pledged that once the JVD and WE ferry terminals resumed international operations, they would again bring in revenues of more than $1 million per year.