On Oct. 25, Cabinet waived the tender process for project management services for the restoration of the L-shaped building on the Elmore Stoutt High School campus, awarding the contract to …

END_OF_DOCUMENT_TOKEN_TO_BE_REPLACED 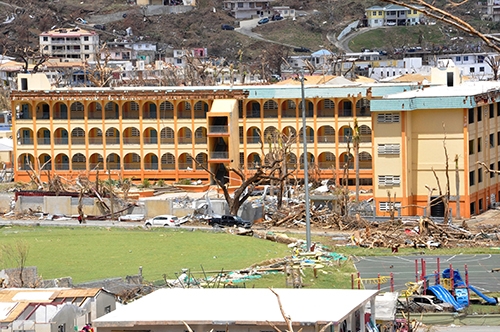 A photo of Elmore Stoutt High School taken in the weeks after the storm. (File Photo: FREEMAN ROGERS)

On Oct. 25, Cabinet waived the tender process for project management services for the restoration of the L-shaped building on the Elmore Stoutt High School campus, awarding the contract to the same firm that oversaw the controversial ESHS perimeter wall project.

SA Architect, headed by Steve Augustine, will oversee the restoration of the building, which was pummeled by Hurricane Irma and hasn’t housed students since.

Mr. Augustine was awarded a $132,142.45 no-bid contract due to his familiarity with the project and its urgency, according to a document summarising the Oct. 25 Cabinet meeting’s decisions.

A previous project of his, the unfinished ESHS perimeter wall, recently came under fire after Education and Culture Minister Myron Walwyn released the Office of the Auditor General’s report on it. The audit alleged that the project didn’t adhere to certain Public Finance Management Regulations, overspent and likely failed to attain good value for taxpayers’ money.

Mr. Walwyn (R-at large) released two versions of the report — a draft submitted to the ministry in July and the final one from August — in an attempt to demonstrate that Auditor General Sonia Webster and her team didn’t properly incorporate his ministry’s responses to the draft report.

“Absolutely nothing we responded to was taken into account in the final report,” he said at an Oct. 9 press conference, to which the Beacon wasn’t invited.

There are in fact some differences between the two documents, however, and some of his ministry’s responses to the draft failed to address the auditor general’s assertions. In some cases, MEC officials’ remarks also included apparently misleading information or justified sidestepping rules by arguing that other ministries do the same.

Ms. Webster’s audit pointed to problems with the wall’s costing that appear to have driven up the price: Similar reinforced block wall projects completed by the Public Works Department in 2015 used construction rates that were less than half the rates paid for the ESHS project, according to the report.

In comments submitted to the auditor that were released by Mr. Walwyn, Mr. Augustine attributed the project’s high cost to varying elevation within the school’s campus.

The wall needed to be eight feet high all the way around the exterior, he explained, but that often meant it was actually a taller wall when standing inside the campus because the campus grounds are a few feet lower than the exterior property in certain locations.

Mr. Augustine — who also defended his work during Mr. Walwyn’s Oct. 9 press conference — also claimed that the wall has an atypical footing that increased the cost relative to other wall projects.

Mr. Walwyn has said that Mr. Augustine regularly spearheads projects for the MEC — and has been doing so since before he became minister in 2011.