While speaking at the Territory Day celebration on July 1, Education and Culture Minister Myron Walwyn said he supports changing the name of the holiday to Virgin Islands Day.  “What …

END_OF_DOCUMENT_TOKEN_TO_BE_REPLACED 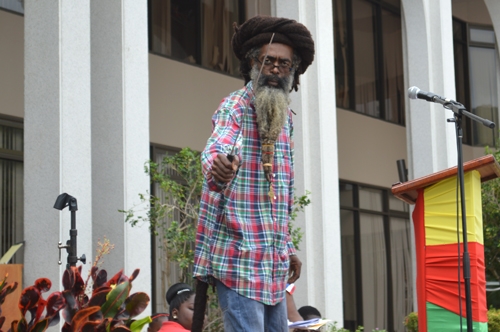 While speaking at the Territory Day celebration on July 1, Education and Culture Minister Myron Walwyn said he supports changing the name of the holiday to Virgin Islands Day.

“What we are actually celebrating on Territory Day is the fortitude of our people,” Mr. Walwyn said, noting that the new name would better represent that focus.

His suggestion echoed one of many made 15 years ago by the Public Holidays Review Committee, which was formed by government to evaluate the modern significance of each public holiday and make recommendations accordingly.

Despite Mr. Walwyn’s recent comment, however, few of the committee’s suggestions have been followed in the decade and a half following the 2001 report (see sidebar).

That is disappointing for Elton Georges, who as then-deputy governor chaired the review committee.

“We’re trying to build a national brand and identity,” Mr. Georges said in a recent interview, adding, “It matters.”

The report included similar comments, noting that each public holiday comes at a certain net economic cost, and therefore should be meaningful to the populace.

The committee also suggested that the territory periodically review holidays to ensure they reflect the VI’s current values.

“We have to work to make sure they are relevant to us in the Virgin Islands,” he said.

The minister added that he intends to follow up on his VI Day suggestion by talking to his colleagues in government and assessing the views of the public.

However, not everyone agrees that Territory Day should be honoured at all, regardless of the name.

“I’m not sure it should be celebrated,” said Natalio “Sowande” Wheatley, a lecturer at the H. Lavity Stoutt Community College. “I’m not sure if it’s something we should feel pride in. Seeing as though we’re still a territory, we should celebrate some of the moves that have made us more autonomous.”

To that end, he suggested establishing holidays celebrating accomplishments like the restoration of the legislature in 1950 or the 1968 Positive Action Movement, when Noel Lloyd led a protest against the Bates Hill company’s proposal to develop land on Tortola and Anegada.

Mr. Wheatley also noted that Territory Day used to be called Colony Day, and that re-changing the name does not change the fact that it celebrates the VI’s colonial status. Colony Day celebrated the 1956 dissolution of the Federation of the Leeward Islands, when the VI’s political status changed from a presidency in the federation to a colony.

According to the public holidays report, this change “set the stage for the ‘great leap forward’ in economic and political development of the 1960s.”

It was officially renamed Territory Day in 1978.

Mr. Wheatley said he thinks the proposed name change would amount to taking territorial symbols and treating them as though they can be substituted as symbols for independence.

In addition to changing the name of Territory Day, the public holidays report recommended that government replace Commonwealth Day with “Heroes’ Day,” focusing on honouring pioneers in VI history, such as the protestors involved with the 1949 demonstration that led to the restoration of the Legislative Council. The committee suggested the new holiday take place in November.

The report also recommended discontinuing the Sovereign’s Birthday as a public holiday, instead continuing to celebrate it every year on a Saturday in June.

“Moves in the [United Kingdom] to demystify the monarch and stress its identification with the common people make it appropriate to rethink this holiday,” the report states.
Instead, the report recommends establishing a public holiday on the third Monday in September called Africa Connection Day, celebrating the VI’s link to Africa with shows, lectures and exhibitions.

Premier Dr. Orlando Smith also released a statement to the Beacon: Though he stopped short of promising change, he acknowledged that renaming public holidays, when appropriate, can be a useful way to make them more reflective of the territory’s history and culture.

“Promoting national pride is a key policy of my government, which now includes a territorial pledge, dress and song — all important components in understanding and appreciating the story of Virgin Islanders,” Dr. Smith stated in an e-mail.

But Mr. Wheatley complained that the territory’s leaders have not actively approached the issue.

“I think we need leadership, and unfortunately our leaders have not championed these causes,” he said.

However, he thinks that the burden also lies with the public.

“The general public has not seen it as important enough to agitate on,” Mr. Wheatley said, adding, “I think we have to have a broader discussion as a community about our identity.”