On a sunny morning yesterday, hundreds of Virgin Islands residents trekked from the newly renamed Ralph T. O’Neal Administration Complex to the Multi-purpose Sports Complex to mourn the death of …

END_OF_DOCUMENT_TOKEN_TO_BE_REPLACED 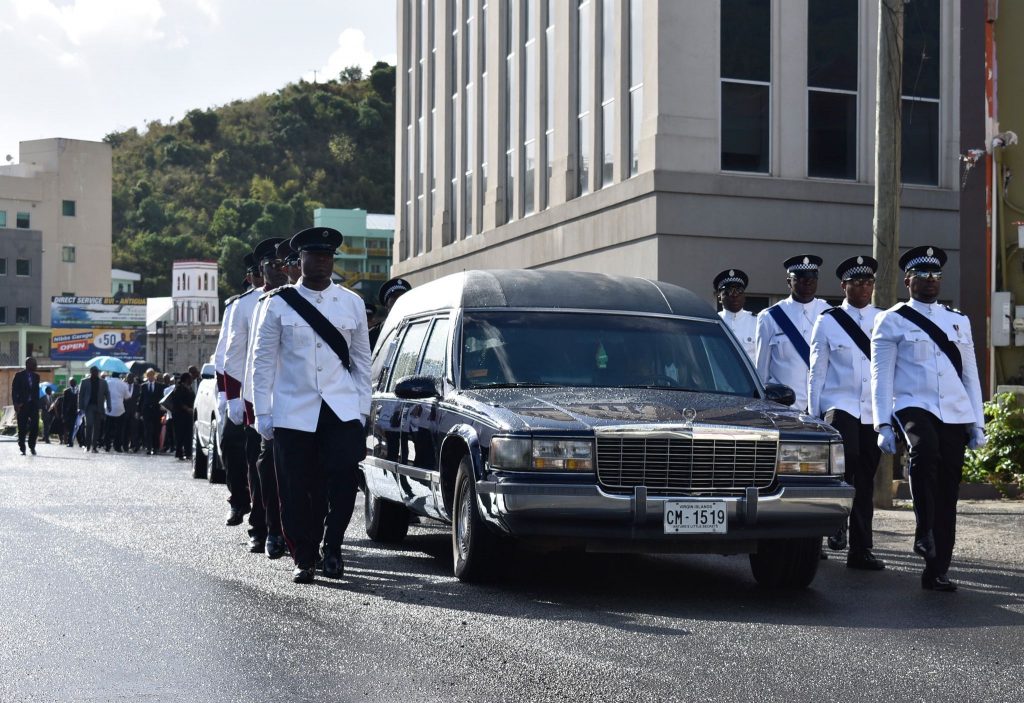 Police march along the hearse carrying the former premier Ralph T. O’Neal’s casket to the Multi-purpose Sports Complex, where hundreds of people attended his state funeral during a public holiday declared in honor of the occasion. (Photo: JOEY WALDINGER)

On a sunny morning yesterday, hundreds of Virgin Islands residents trekked from the newly renamed Ralph T. O’Neal Administration Complex to the Multi-purpose Sports Complex to mourn the death of the territory’s first premier and longest-serving elected representative.

Mr. O’Neal, who died last month at the age of 85, was then remembered by dignitaries and family members who lauded his accomplishments and shared personal anecdotes during a lengthy state funeral before his body was taken to his home district of Virgin Gorda to be laid to rest at the O’Neal Burial Ground.

“Honourable O’Neal always associated himself with the common man while dining and negotiating with prime ministers, presidents, queens, kings and members of the royal family,” Health and Social Development Minister Carvin Malone said during the service.

Mr. Malone also recalled Mr. O’Neal’s early career as a schoolteacher on Virgin Gorda, when he would saddle up his horse and seek out students who were skipping class and bring them back to school.

Later, during his nearly 40 years as Virgin Gorda’s representative in the legislature, Mr. O’Neal maintained these close personal relationships, according to Mr. Malone.

“During his years in private and public life, there was a special love for North Sound,” he said. “I could not travel to Virgin Gorda with Honourable O’Neal without a visit to the home of Ms. Lucy Harrigan in North Sound and then a drink of orange juice.”

Premier Andrew Fahie praised Mr. O’Neal’s religious devotion and his commitment to public projects, including the construction of the Multi-purpose Sports Complex and the Bregado Flax Educational Centre.

His daughter Abigail O’Neal shared a memory of her father picking her up from school to take her to Rite Way to get candy.

Later, when she moved to London as an adult and was searching for a flat, he instructed her to prepare a report with photos, pros and cons, and safety ratings, she said.

“He was a committed and dedicated man who did not do things halfway, and always tried to lift me and those around him up to realise their full potential,” she said.

Another daughter, Esther O’Neal-Wheatley, said she could always rely on him when she was growing up.

“He was a warm, caring, loving and sharing father, with a little bit of a quirky sense of humor. This side of dad is not the most obvious to many, but understand he was a logical, thinking man and viewed the world from that perspective,” she said.

“His personal emotions were rarely on display, but we know in his time of privacy he cried when we cried; shared our dreams and aspirations or successes and failures; celebrated with us and fought our battles for us when necessary.”

Bell Creque was one of the many passengers aboard a ferry that carried residents of Virgin Gorda and Anegada to Tortola to pay their respects.

“I’m sad to see his passing but I’m happy to have this celebration of the life and legacy he left behind,” Ms. Creque said.

Miriam Grant, of Tortola, was smiling while walking towards the administration building, but she agreed that it was a sad day.

“It’s emotional,” Ms. Grant said, adding that she will remember Mr. O’Neal “for his kindness towards not only his family but other people.”

She noted that Mr. O’Neal paid special attention to his constituents in the Ninth District.

Once the procession began, a burst of rain sent pedestrians scattering for shelter. The shower soon abated, and onlookers gathered on sidewalks and in doorways to watch the procession pass them by.

The hearse carrying Mr. O’Neal’s casket trailed a group of police officers marching instep, and behind the hearse stretched a long line of residents, government officials, former politicians, and delegates from the United States Virgin Islands.

After starting work as a public-school teacher at the age of 18, Mr. O’Neal rose to become principal of the North Sound School in Virgin Gorda and later earned a degree in public administration at the University of Oxford in England.

He worked in the public service and the private sector before he was elected to the legislature in 1975. From there, he would go on to serve in various ministerial roles, emerging relatively unscathed from a civil trial in the 1990s in which a judge cited evidence that he had abused the proxy voting system, amongst other allegations of misconduct.

He later served two terms as chief minister and then one term as the territory’s first premier after the position was created in the 2007 Constitution.

During his time in office, he oversaw the rapid development of the territory from a subsistence economy to a tourist destination and financial services centre, as well as the rapid expansion of infrastructure, population and social services, and he often advocated for more autonomy from the United Kingdom.