Local News > The art of driftwood

The art of driftwood

While a trip to the shore serves as a relaxing getaway for many, some beachgoers can’t help but find inspiration among the twisted branches of wood that float their way …

END_OF_DOCUMENT_TOKEN_TO_BE_REPLACED 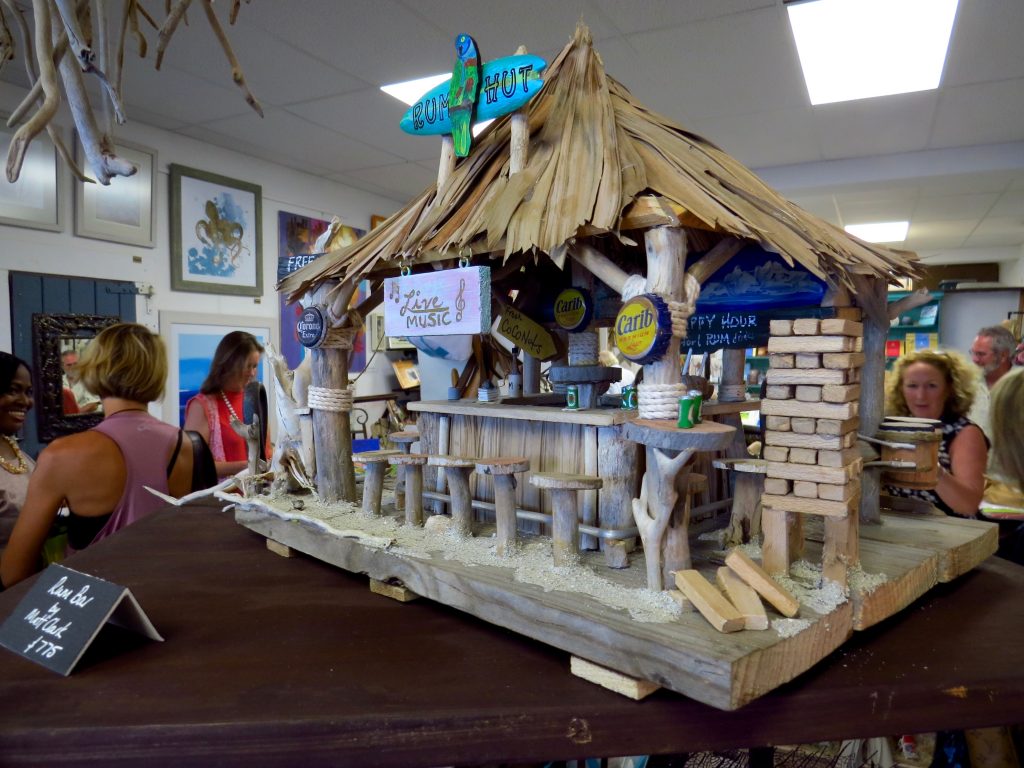 The “Rum Hut” draws attention from patrons at an art show featuring driftwood sculptures last Thursday at Nutmeg & Co. in Road Town. Artist Matt Clark said he was inspired to return to the world of art about two years ago, and he enjoys making three-dimensional pieces that have interactive elements. (Photo: DANA KAMPA)

While a trip to the shore serves as a relaxing getaway for many, some beachgoers can’t help but find inspiration among the twisted branches of wood that float their way to the Virgin Islands.

Nutmeg & Co., an art gallery and home goods store based in Road Town, displayed an unconventional form of art last Thursday in “Adrift – An Exhibition of Driftwood Art.” The show celebrated the talents of driftwood artists who work in the territory, each with their own style and speciality.

One preferred painting on driftwood planks; one enjoyed creating intricate, functional scenes; one drew her inspiration for colourful character pieces from whatever bits of shell and netting inspired her.

“They all work so differently,” Ms. Gray said. “As the work came in the last couple days, it was really exciting to see so many different things, and how everyone perceives things differently.”

Matt Clark, one of the artists featured that evening, said he finds satisfaction in creating intricate pieces that people take the time to carefully consider — discovering new details with each viewing.

One of the pieces he shared, a whimsical watering hole called the “Rum Hut,” contained many surprises. Hanging off one roof edge was a functional version of the “ring game” popular at beach bars around the territory. Three bricks from the “giant” Jenga game on the beach can move. And if the viewer peers from underneath the art piece, one can see a mural of a blue and white sky.

Mr. Clark recently retired from a 30-year career in the aviation industry as a mechanic, and he appreciated the opportunity to return to the world of art with the newfound free time.

“I just recently got back into art in the past two years, when I moved here. Through high school I took art, usually just to get out of classes,” he said with a chuckle. “But I’ve always been interested in it. … It’s been a lifelong dream to have my art in an art gallery, and everything just fell into place.”

One of his other pieces on display was a historic schooner with working sails, carrying period-accurate goods including salt fish and sugarcane. Mr. Clark said with such pieces, he always enjoys seeing history buffs appreciate the details.

Ms. Gray is partners with Mr. Clark in their framing business, and she said it was partially his interest in driftwood that inspired the showcase. She said he would be working on assembling a frame, and before too long he would be adding details to a driftwood scene.

“He was really the start of it,” Ms. Gray said.

Artist Laura Del Beato takes a different approach, instead focusing on individual characters. Inside Nutmeg & Co.’s front window was displayed a pair of faces with tall sea-green hats made out of fishing line, with one sporting a white seashell beard.

Ms. Beato said from a young age she picked up unique bits and bobs, and she enjoys having an outlet to put them to use.

Gesturing toward a piece with curly white hair comprised of round shells, Ms. Beato said, “This one was the first one. Me and my son went swimming, and we collected loads and loads of them.”

As a hairdresser, she envisioned a woman with curls upon curls, and the first character was born.

Artist Leslie Cramer, who has lived in the territory for about 10 years, brings vibrant paints to her work, with the fish of the VI being a favourite subject.

“I’m from St. Croix, so there’s a lot of driftwood there because it’s isolated 40 miles out there — there’s nothing else close by, so more stuff washes up,” she said. “I used to collect a bunch of driftwood, and I started thinking, ‘Well, what am I going to do with this?’”

She always enjoyed the natural beauty of the territory, so the medium and her painting talents came together to create her aquatic scenes. Ms. Cramer said queen angel, parrot and triggerfish populate her work because their flashy tones and elongated fins bring a certain life to the blank slates she finds in nature.

‘It comes to life’

One of the newest artists on the scene is Nichola Dunkley, who tends to work with the natural colours and shapes of the wood she collects. She said one of the best moments for her is applying a varnish that brings out the golden, pink and other underlying tones of the wood.

“You never know what you’re going to get,” she said. “Once you start varnishing, it comes to life.”

She creates everything from lamps to candle holders to sculptures out of driftwood, and she takes pride in using mostly repurposed materials to accentuate what she finds on the beaches.

“With some of these pieces, I can’t tell you nothing but that they were gifts, because we came across them just the way they were for the most part,” she said, explaining that all that was left was to dress them and give them a solid base.

Other artists featured at the show included Lutia Tai Durante and Marc Downing, who doesn’t work with driftwood but creates wooden platters and bowls.

Nutmeg & Co. is located at 164 Waterfront Drive in Road Town. Ms. Gray said most of the pieces will be on display for the remainder of the month. For more information, call 494-1426 or go to www.nutmegandcobvi.com.