The bees of Virgin Gorda

On a recent Wednesday afternoon, Jahnai Caul and Ariq Flax-Clarke searched for signs of honey, larvae and queens during a routine check-up on their bee colonies on Virgin Gorda. “Those …

END_OF_DOCUMENT_TOKEN_TO_BE_REPLACED 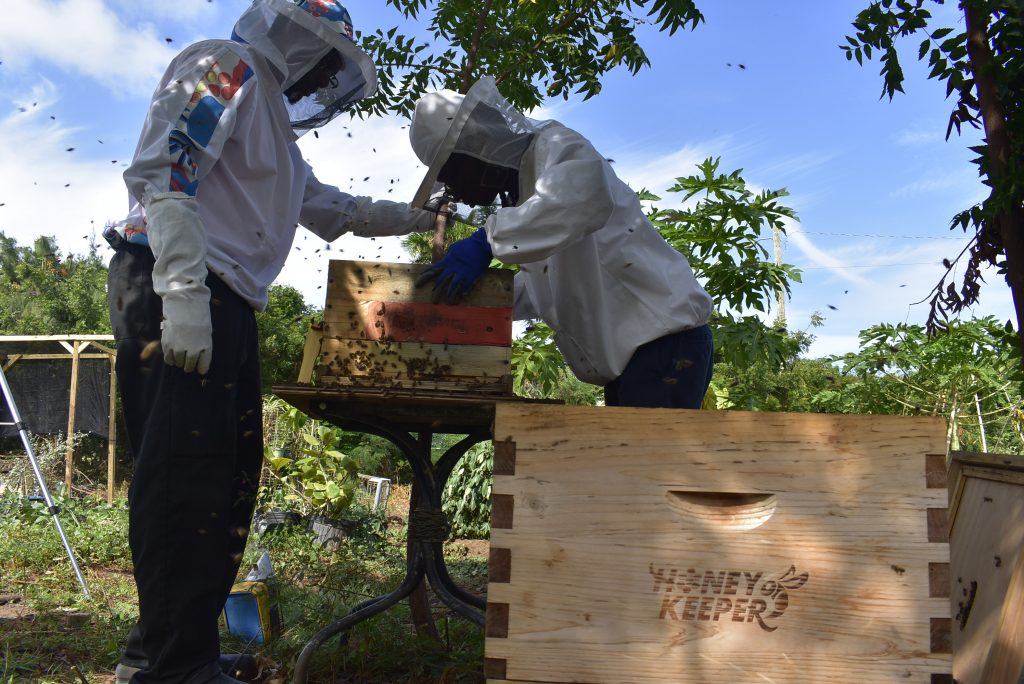 On a recent Wednesday afternoon, Jahnai Caul and Ariq Flax-Clarke searched for signs of honey, larvae and queens during a routine check-up on their bee colonies on Virgin Gorda.

“Those are all signs of a healthy colony,” Mr. Caul said while inspecting a colony. “We name the hives off of our clients where we do our removals. So the guy’s name was Gaza and that’s the colony name.”

Gaza is their most advanced colony, producing the most honey and housing the largest swarm.

During their careful investigation, Messrs. Caul and Flax- Clarke looked through the hive and found that it was thriving: The bees were building a lot of hive, producing a lot of honey, and creating many drones.

But the colony is quickly outgrowing the wooden structures that they provided for the bees, which have been building in a “disorganised” manner, Mr. Caul explained.

The two run BuzzWorks, a local beekeeping company that they intend to transform into a full apiary — a large collection of beehives.

Right now, they have six colonies and soon they’ll have ten. Eventually, they plan to take care of 100.

But first, they may need to expand their land space. Messrs. Caul and Flax-Clarke have noticed a shift in the bees’ behaviour in recent weeks as they have added more colonies.

“They’re trying to protect their food sources, so they tend to get very territorial. The more colonies you put in one area, the more aggressive the entire scenery gets,” Mr. Caul said. “Since we have an increase of colonies, it changed the entire environment of the apiary. There is a need for us to expand and to move them away to their own location.”

He initiated a farmers market on Virgin Gorda in recent years — what he called a “one-man-show” — and usually sells produce once a week.

“I try my best to get on the streets every Saturday,” he said while preparing himself for the routine hive check-up.

As they prepared to inspect the colonies, Messrs. Caul and Flax-Clarke first set up a smoker. The smoker is a small tin can that can hold kindling and pump smoke out, thereby temporarily stunning bees.

This tool helps the pair stay safe and calms the bees if they begin to get aggressive.

Then they dressed in protective clothing, including tops, hats, nets and gloves before approaching the colonies.

Each colony is housed in its own wooden crate. Some of the crates were imported, while others were commissioned by local woodworkers who created them out of pallet wood often found in the Virgin Islands.

“We find stuff around that we can use, because a majority of hives are built out of wood and almost every week there are wood pallets coming in,” Mr. Caul said. “If we can decrease the amount of pallets that just go to the dump, I think that’s a good thing that we recycle the pallets.”

The bees are able to come and go from their hives as they please, but the hives remain covered at the top to keep each colony contained and give the bees a sense of security.

When the pair do their inspections, they take the lid off each colony and pull out each of the ten frames inside of the box.

The bees are given empty frames inside the wooden crates where they build their hives. The hives consist of sections where honey is stored and sections where the brood — or drones and worker bees — larvae grow. The larvae are no bigger than a grain of rice when they begin life.

The Gaza colony was overgrown with both honeycomb and larvae sectors.

“We might put another box on top and let them build there,” Mr. Flax-Clarke said.

Though the two were keeping their eyes out for the queen, they weren’t able to find her in the colony. They presumed she was hiding and protecting herself.

In another colony, Messrs. Caul and Flax-Clarke said, they hadn’t been seeing any larvae at all, so they took action.

“We noticed a queen was growing in one of the cells — and we put it in this box. We stuck it onto a piece of comb,” said Mr. Flax-Clarke. “When we came back the cell was empty. She probably did emerge and mated already and now she’s laying how she was supposed to lay because at the start there were no eggs at all.”

In that colony, they noticed a lot of brood and honey.

Though they aren’t harvesting honey yet, they plan to start once the colony grows a little more. They hope to produce locally made honey and encourage others to do the same by hosting outreach programmes.

Mr. Caul recalled his first experience with bees as a child.

“One morning, my mom woke me up with fright and the room was full of bees. We called the bee man and he came and did a removal,” he said. “I watched that entire process as a little boy.”

The experience inspired him to look into beekeeping later in life. He ended up taking a course in entomology in Jamaica, which required him to buy a beekeeping suit.

Mr. Caul is a farmer in Virgin Gorda and Mr. Flax-Clarke is a professional chef who has represented the territory in international cooking competitions.

Mr. Flax-Clarke said that when he came back to the VI from the United States at the start of the pandemic, he wanted to use local honey in his cooking.

“I started to look to out-source the honey because I didn’t know that we have local bees,” he said. “So then I saw a post from Jahnai. And then he told me if I’m interested I can come out and spend some time with him with the bees.”

After the first couple of days, he said, he connected to the endeavour.

“It’s not only about just the honey at this point,” Mr. Flax-Clarke said. “It’s making our community more aware of it too. We have produce here that we don’t have to import from anywhere else. Me being a culinary enthusiast, it all just connects.”