One rainy day last month, Anisha Butler, a student at Bregado Flax Educational Centre’s Secondary Division on Virgin Gorda, explored the crumbling remains of her school, taking photos of the …

END_OF_DOCUMENT_TOKEN_TO_BE_REPLACED 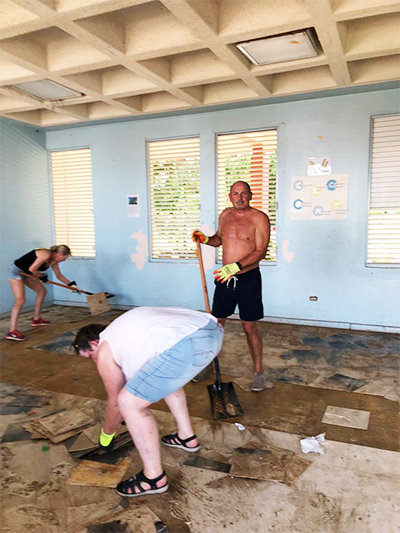 One rainy day last month, Anisha Butler, a student at Bregado Flax Educational Centre’s Secondary Division on Virgin Gorda, explored the crumbling remains of her school, taking photos of the empty structure that’s been unusable since it was gutted in Hurricane Irma, forcing her fellow senior students to cram into a building with their younger classmates.

All year, the other division was fenced off and forbidden. “We can’t really be around here right now because it’s very dangerous,” she said.

That’s about to change. Nearly a year after Unite BVI pledged $1 million to the rebuild and FLOW pledged $540,000, ground was broken during a ceremony last month on a plan to replace it. The organisations will rebuild one of the school’s three buildings, with the government assuming responsibility for the rest of the project.

Ms. Butler won’t get to enjoy it, however, since, as a senior, she will have moved on by then.

“Even though I’m leaving, it’s going to be good for the kids that are still here,” she said. “They’re the ones who are compromised right now because of the state of the school.”

Unite BVI Executive Director Dr. Sauda Smith acknowledged the long lag time, but said throughout the process a lot was happening behind the scenes.

The organisation has been working toward those ends in other ways as well. Previously, Unite BVI had facilitated an early childhood centre in the school, which is currently being used as a makeshift classroom — half computer lab, half library — donated by a guest at Necker Island.

And on Nov. 15, an army of 90 volunteers descended on the school led by Chris Hall of Virgin Atlantic Airways.

“They had a booking this time of year, but due to the storm they weren’t able to do it,” she said, although a small group did visit in December to help in the Irma recovery effort, staying in the VG Recovery Operations Centre building above ScotiaBank for three days.

During their November visit, they helped remove rusty cabinets, soiled books and other debris from classrooms, and filled four trash bins with bulky waste from the ghut behind the complex. They also rigged up a sail to provide shade, and put in the fencing around a school garden that will be cultivated by students in partnership with the Green VI garden programme.

“It was a big community event,” said Kim Takeuchi, operations manager for Unite BVI, “and a great example of voluntourism. What was so great was this 90 people are not only doing good, … they are also stimulating the economy. Ninety people going for dinner is a good injection of money.”

Rebuild
The bigger project lies ahead, as the rebuild commences. The two-level structure will receive a brand new concrete roof, new flooring, windows, doors and handrails, and will likely be solar-powered.

It will give secondary students space to learn such subjects as woodwork, home economics and music.

Ms. Takeuchi said the organisation is happy with the help received from the Ministry of Education and Culture and the partners they chose to lead the project, starting with their architect, Jose DeCastro, a former student at BFEC.

“I love that little twist:
Now he’s tearing down the school and clearing down the debris,” she said.
She also credited their “amazing project manager,” Kevi Potter from BCQS, and their contractor, Rufred Forbes and Associates.

Asked what happened in the interim between the time the pledge was announced and the groundbreaking last month, Ms. Takeuchi pointed out that they started from scratch.

“We are in partnership with the government, which has regulations to adhere to,” she said. “We are going by the book. We move as fast as possible with the protocols required, but we also have our own internal protocols that we adhere to.”

Their biggest challenge?
“We’ve never done something like this before,” she acknowledged. “When we do have challenges, we get through them together. We never really dwell on anything. I live in Virgin Gorda and I see teachers and students in the street, so I have this never-ending desire to keep pushing forward and never give up.”

Dr. Smith also acknowledged the long preparatory process, but now she is looking forward to moving ahead to something else, and watching as the building progresses.

“Now there’s no obstruction,” she said. “The designs are ready. It’s really exciting.”