Ten people and ten days. That’s what it took to set up the stage for what organisers billed as the largest concert in Virgin Islands history. With an estimated attendance …

END_OF_DOCUMENT_TOKEN_TO_BE_REPLACED 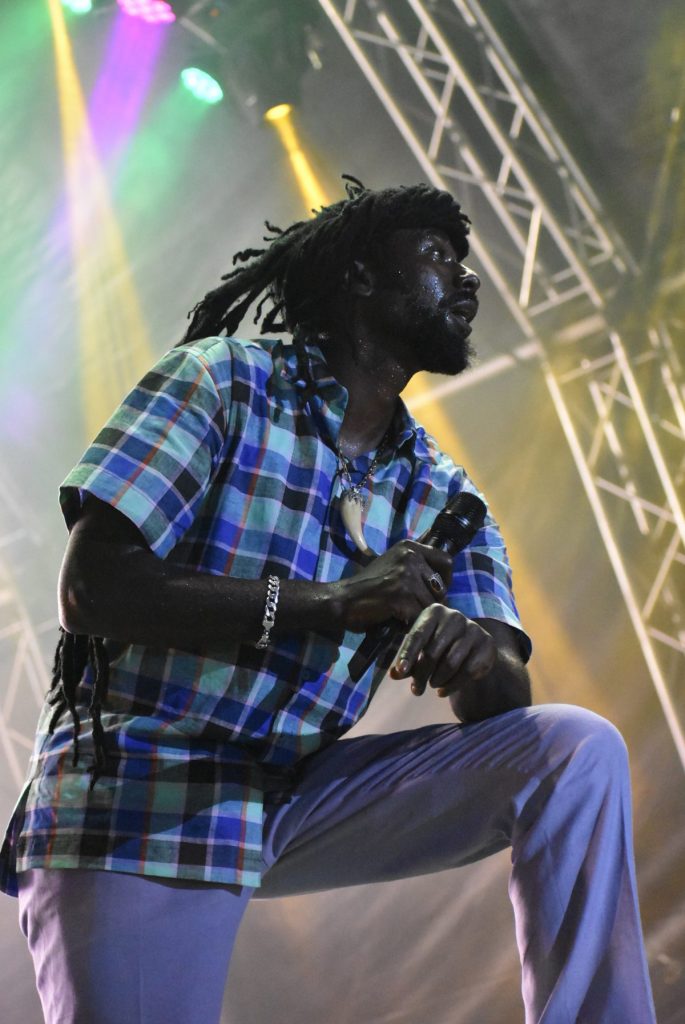 Buju Banton made a comeback in his career after being in jail for the past eight years. He performed in Tortola on Saturday night to a crowd of thousands. (Photo: ZARRIN TASNIM AHMED)

Ten people and ten days. That’s what it took to set up the stage for what organisers billed as the largest concert in Virgin Islands history.

With an estimated attendance of nearly 8,000, the Buju Banton show on Saturday night welcomed fans from across the Caribbean, and many more from the mainland United States and further abroad.

“I am a fan of Buju Banton because he makes good music — music we can relate to,” said Ernest Bertram of St. Thomas, adding, “I’m having a great time.”

He noted that the event organisers were handling the large crowds well, saying that there were a lot of people but not too many.

“It’s crowded, but it’s good,” he said. “You can still pass the crowd easily, get your drink, get your food, and still have a great time.”

With hotels filled up, many residents offered up their homes to travellers through Airbnb or advertised on Facebook groups like BVI Community Board.

“We’re staying here in town at an Airbnb,” said Nas Roman, who travelled from St. Thomas for the night. “I think it was a reasonable price.”

Throughout the night, artists including Koffee and Capleton performed prior to Mr. Banton and gave shout-outs to cities including New York, Atlanta and others. Crowds responded with cheers, acknowledging the places they had travelled from to witness the return of Mr. Banton.

Mr. Banton, the stage name of reggae-dancehall star Mark Anthony Myrie, was released from a United States prison in in early December.

He was convicted in 2011 for drug-related charges and sentenced to a 10-year term, which was reduced a year later into eight years. As a well-known reggae artist in Jamaica, Mr. Banton has collaborated with many renowned American artists including Fat Joe and Busta Rhymes over his 30 years in the industry.

He is now banned from entering the United States.

When Mr. Banton launched his “Long Walk to Freedom” tour in Jamaica in March, BBC reported that the show was described as the biggest music event in Jamaica since Bob Marley’s Smile Jamaica concert in 1976. It was hailed as a legendary comeback and in a stadium with a 35,000-person capacity, an estimated 40,000 attended, BBC reported.

In addition to the Virgin Islands and Jamaica, so far Mr. Banton has performed in Guyana, Bermuda, the Bahamas, Trinidad and Tobago, Barbados, Suriname and Grenada. With dates into mid-August, his next shows are in St. Kitts, Germany, the Netherlands, Switzerland, Portugal, France and Antigua.

Then the tour will return to Jamaica before going to Bermuda.

Though Mr. Banton didn’t take the stage until 1:30 a.m. on Sunday, the show was filled with other performers from Jamaica, the USVI and this territory, including Koffee, Capleton, Cocoa Tea, Pressure, Sistah Joyce, Revalation Da Royal, and Shine I.

Doors opened at 5 p.m., and by 7 thousands had already filled the Festival Village Grounds in Road Town.

Divided into general admission, VIP and “Ultra VIP” — a tent that included bottle service — most attendees had plenty of room to dance and move around.

The crowd went wild when Koffee, a 19-year-old artist out of Jamaica, performed her hit songs “Rapture” and “Toast.”

Another Jamaican dancehall and reggae artist, Clifton George Bailey III, also known as Capleton or King Shango, took the stage dressed all in red just before Mr. Banton. His music included Rastafari spiritual themes and classic roots reggae. According to Spotify music, he’s credited, along with Mr. Banton and Sizzla, for bringing dancehall back into reggae tracks.

When Mr. Banton finally came on stage, crowds packed in closer to him. He was an energetic dancer throughout his set and many fans recorded his performance on cell phones.

A brief shower sent some concertgoers running for cover under tents, but it didn’t stop Mr. Banton from performing.

He did not perform his 1992 song “Boom Bye Bye,” which has been criticised for apparently advocating the murder of gay men. In March, Mr. Banton said he had removed the song from the platforms he controls, and he promised not to play it again, according to the Jamaican news site Urban Islandz.

“I affirm once and for all that everyone has the right to live as they so choose,” he told the site. “In the words of the great Dennis Brown, ‘Love and hate can never be friends.’