On Tuesday night of last week, a fire started at the temporary dumpsite on Jost Van Dyke, burning bright enough that some residents said they could see the blaze from …

END_OF_DOCUMENT_TOKEN_TO_BE_REPLACED 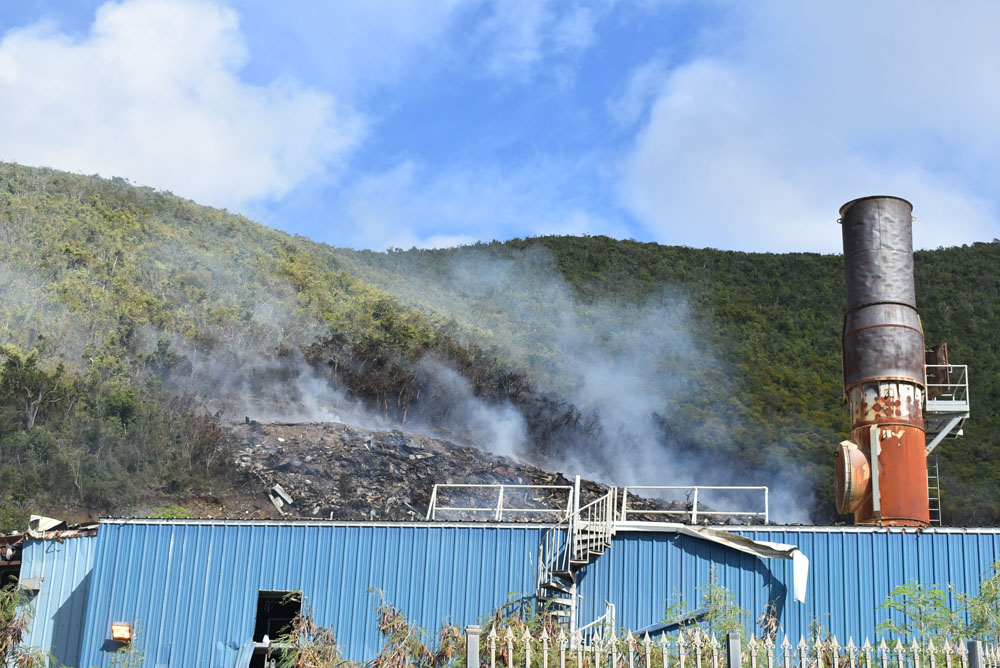 On Tuesday night of last week, a fire started at the temporary dumpsite on Jost Van Dyke, burning bright enough that some residents said they could see the blaze from Tortola.

By Friday morning, another dumpsite, this time on Virgin Gorda, was in flames, emitting thick black smoke across much of the island.

Finally, at about 7 p.m. that same evening, the landfill at Pockwood Pond on Tortola also caught fire.

While the sister-island fires were shorter lived — the VG blaze burned at its peak intensity for about a day, and the one on JVD was out the day after it started, according to officials and bystanders — smoke continued to billow from Pockwood Pond over the weekend and into yesterday morning.

Greg Massicote, manager of the Department of Waste Management, said the causes of the fires were likely different.

On Virgin Gorda, a waste contractor hired by a resort accidentally dumped debris in a small heap of garbage that had been set on fire by DWM, rather than the area at the dumpsite “designated for waste that we do not burn,” Mr. Massicote said. He did not name the resort.

“I do not think it was a willful act,” he wrote in a text message. “The department did not have anyone on site at that particular time and the contractor probably did not know exactly where to dump his contents.”

Mr. Massicote said DWM still practises open burning “from time to time” at the dumpsites on Virgin Gorda and Anegada.

Meanwhile, the manager said he does not know what caused the fire on JVD, but that the blaze was “extremely small.”

A video posted on Facebook, however, depicts high flames reaching about tree height.

Acting Chief Fire Officer William Penn said he could not verify if officers had responded on JVD, and did not think any had fought the fire on VG.

The Pockwood Pond blaze likely started spontaneously at or near the location where another fire had sprung up a week earlier, Mr. Massicote said.

Though the manager said fire officers were on the scene for several hours on Friday night, after they left at about 11:30 p.m. the fire spread across the road to another section of the landfill.

Officers returned at about 4 a.m. on Saturday until about noon that day, after making sure the fire didn’t spread to the neighbouring BVI Electricity Corporation building, according to Mr. Penn.

“We were satisfied that it was no longer a threat from an environmental standpoint,” Mr. Penn said, in explaining why fire officers are no longer at the site.

Mr. Massicote said on Monday that the smoke had “diminished tremendously.”

“The flames are out right now — they’ve been out from Saturday evening — but we’re obviously dealing with smoke,” he said.

More challenges remain for DWM to put out the smoke completely, however.

Mr. Massicote said the department plans to truck in as much soil as possible to smother the flames, but that process only began yesterday.

For days DWM was waiting on “financial clearance” from the Ministry of Finance in order to hire contractors and bring the necessary equipment in, and only received that clearance on Tuesday, he explained.

The manager anticipates that it will take a week or two to stop the smoke on the eastern side of the dumpsite, and possibly another two weeks for the western side — but “hopefully less.”

“We’re gonna work as much as we can to get it back to normal,” he said.

Mr. Massicote said that while occasional fires are not uncommon in landfills, DWM has dealt with many at Pockwood Pond in the past year.

“Why it’s happening so frequently is we’re overwhelmed with the amount of waste coming in: It’s more than we can handle,” he said.

“We’ve collected years’ worth of garbage and debris, and our system isn’t designed to handle that quantity so frequently. My staff has been working around the clock nonstop since Sept. 6 and there’s only so much we can do with what we have.”

In the future, there are a few ways to prevent garbage fires, he said.

First, he advised, residents should reduce their waste and recycle whenever possible.

But Tortola also needs a “proper landfill” to work side-by-side with the incinerator, he added.

The current Pockwood Pond landfill is lacking certain environmental protections, like a methane gas collection system, according to the manager.

“That’s really what’s needed. Having a properly functioning collection system reduces landfill fires, but there would still be occurrences,” he said. “It’s not foolproof, but it reduces the likelihood.”