While seemingly everything waits to be repaired after Hurricane Irma, it’s refreshing to see something shiny and brand-new. Road Town Fast Ferry owner and operator Bobby Hodge thinks his two …

END_OF_DOCUMENT_TOKEN_TO_BE_REPLACED 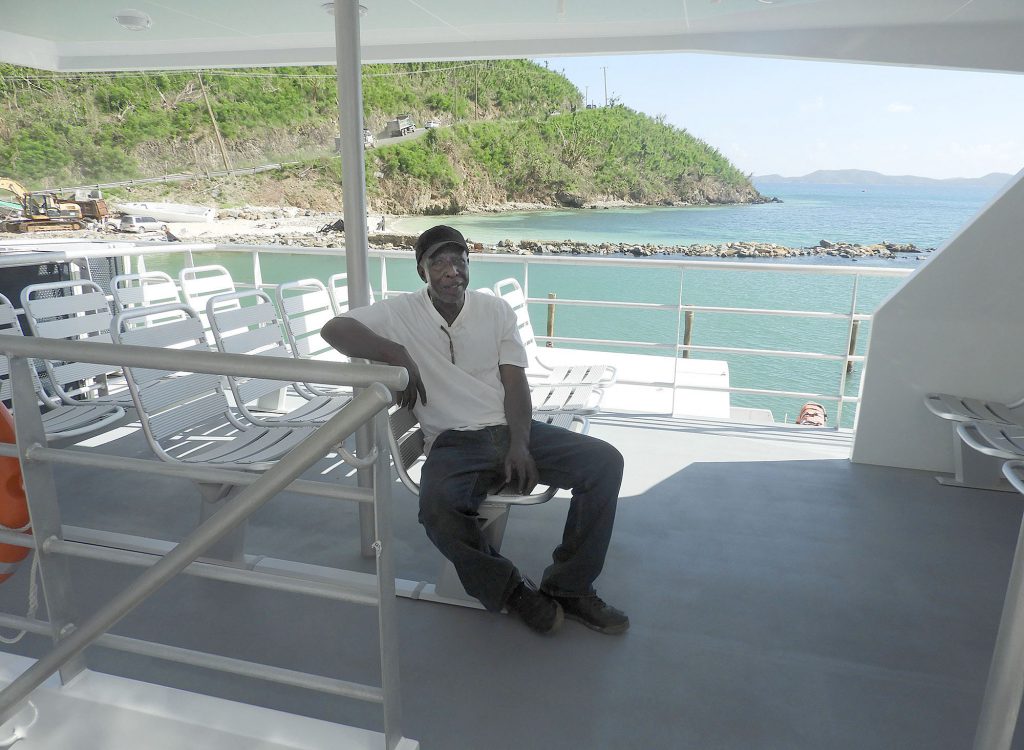 Road Town Fast Ferry owner Bobby Hodge sits on one of the two new boats he purchased before Hurricane Irma, which have since arrived in the territory and are scheduled to be launched next month. Photo: CLAIRE SHEFCHIK

While seemingly everything waits to be repaired after Hurricane Irma, it’s refreshing to see something shiny and brand-new. Road Town Fast Ferry owner and operator Bobby Hodge thinks his two new 30-metre vessels, which will be launched in November for service between Tortola and St. Thomas, are just what the territory needs.

Mr. Hodge, who purchased the boats well before Irma, said it took 28 days to ship them from their manufacturer, Aluminium Marine in Queensland, Australia, but that it was worth the wait.

Powered by new Yanmar diesel engines, the three-tier boats are equipped with air-conditioning, flat-screen televisions and plush upholstered seats with room for 300 passengers.

Mr. Hodge said he is naming them Lady Daisy and Lady Caroline, after his sister and mother, respectively.

“There was time years ago when things were slow on Tortola, and I went over to St. Thomas, and my sister was there for me,” Mr. Hodge explained. “We talked every day and she helped me a lot. So I wanted to honour her.”

The territory also has another new vessel operated by New Horizon Ferry Service, which has already begun operating between West End and Jost Van Dyke. The company’s previous ferry was damaged during Irma when it landed upside down on Sidney’s Peace and Love Bar.

According to Sendrick Chinnery of New Horizon, the vessel is called the Paradise Princess and it will operate on Monday, Wednesday and Friday until the first week of November, when the schedule will be revised.

Susan Zaluski, director of the Jost Van Dykes Preservation Society, said the boat is a major boon for the island’s residents.

“They ordered it way before the hurricane, but now that it’s running people have been able to do their shopping on Tortola, since there’s only one small store operating here,” Ms. Zaluski added.

Mr. Hodge said he was lucky that his company did not lose any of its older vessels, but its facilities needed extensive cleanup and are only very recently back to business as usual. He added that he hopes the new ferries will enable him to offer more frequent service and bring more visitors to the territory.

Still, Mr. Hodge said that even with the new boats, he doesn’t expect everything to get back to normal right away.

“This season will be a little slow,” he admitted.

But he also said he trusts that the yachting and hospitality industries have plans to be in operation this season.

He’s hoping government will also assist his company with finances.

“They told me I would get a subsidy [to operate the ferries], but they haven’t given me anything yet,” he said. “Everyone in the government is a little confused right now. They’re not communicating with each other. It’s been up to us in the private sector to get back up and running.”