For 20 years Virgin Islands politics has been dominated by a two-party system, but that might change with this month’s general election. Since 1999, the government has been led by …

END_OF_DOCUMENT_TOKEN_TO_BE_REPLACED 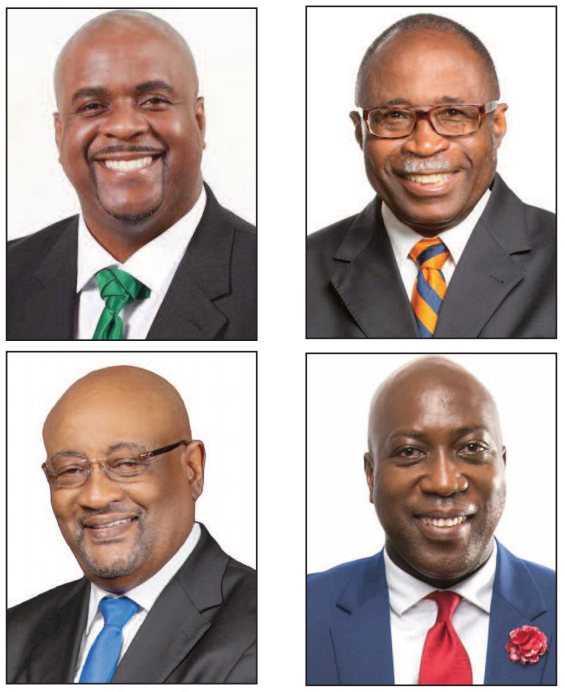 Pictured clockwise from top left, Andrew Fahie, Julian Fraser, Myron Walwyn and Ronnie Skelton are each leading a party into the Feb. 25 general election. If one of the parties wins a majority of the 13 House of Assembly seats, the party’s leader is likely to be premier. (Photos: FACEBOOK)

For 20 years Virgin Islands politics has been dominated by a two-party system, but that might change with this month’s general election.

Since 1999, the government has been led by either the Virgin Islands Party under Ralph O’Neal or the National Democratic Party under Dr. Orlando Smith. But Mr. O’Neal retired in 2015 and Dr. Smith is stepping down this month, leaving a power vacuum that has seen both the governing NDP and the opposition VIP fracture amid bitter infighting in recent years.

A similarly public split hit the NDP late last year after Education and Culture Minister Myron Walwyn was elected to succeed Dr. Smith: Veteran at-large representative Ronnie Skelton left the party, which he helped found in the 1990s, to launch the Progressive VI Movement, taking another NDP legislator with him.

The recent shakeups mean that four parties — each of which includes at least one experienced lawmaker — are headed into the general election, and one of the party’s leaders is likely to be the next premier.

The VIP is currently the only party with a full slate of 13 candidates. The incumbent NDP has announced 11, the PVIM nine and PU six. Besides two independents, they make up all of the candidates who are actively campaigning for office.

The Beacon invited the four party leaders to discuss their vision for the territory in one-on-one interviews.

All except Mr. Walwyn agreed, and the interviews with Messrs. Fahie, Fraser and Skelton each covered similar topics, including the hurricane recovery, detailed policy plans, threats to the financial services and tourism sectors, and the future of the VI’s relationship with the United Kingdom. The leaders were also asked about missteps and successes during their time in office.

Mr. Walwyn and NDP President Troy Christopher did not respond to requests to explain why Mr. Walwyn declined the interview, though the candidate sent the Beacon a copy of his 2019 “campaign magazine,” which includes details about various accomplishments made during his time as minister and excerpts from past speeches.