Progressives United announced its first two at-large candidates on Monday night during a “pep rally” in Sea Cows Bay: Verna Smith and Rajah Smith will both run under the banner …

END_OF_DOCUMENT_TOKEN_TO_BE_REPLACED 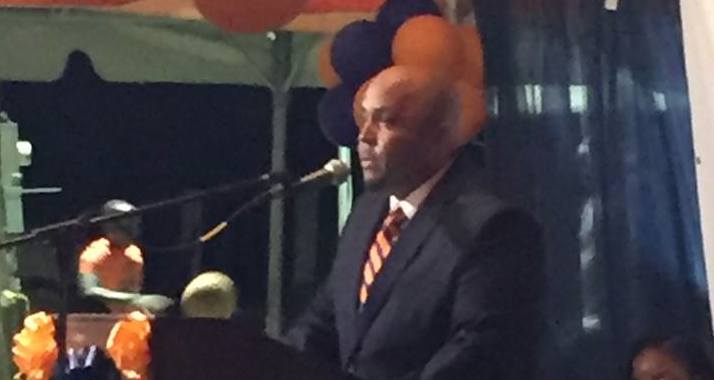 Then yesterday Dirk Walters, who previously announced that he would campaign for the District Five seat,told JTV that he had changed his mind and would be “contesting the general elections as an at-large territorial candidate.”

The additions bring the total slate to six candidates. During her brief remarks at the rally,Ms. Smith, a long-time aviation professional who is currently a manager at Air Sunshine, promised, “I have been listening to the cries of my people and I am ready to be your voice.”

She added that she is honoured to be affiliated with Mr. Fraser and that she is running “because I care very passionately about the future of the Virgin Islands.”

Mr. Fraser described her as a Sea Cows Bay resident who has “expressed interest in politics for quite some time.”

He added, “I didn’t just pick her up off the street.”

Mr. Smith, who last week announced that he would run as an independent candidate, is now hitching his wagon to Mr. Fraser’s, saying he was inspired by the incumbent’s efforts to clean up the Third District, where he claimed “all the garbage” comes through.

“We are strong people,” he said of the district’s constituents.

Mr. Smith, who frequently plays up his “common man” credentials, ran as a Virgin Islands Party candidate in the Second District four years ago,finishing a distant third with 22 votes.

In his remarks on Monday, he addressed crime prevention, which he said doesn’t get enough focus around election time, and referred to the fatal shooting in Huntums Ghut on Sunday night.

“The government is not serious about crime,”he said.“We must fund our police force.”

However, it was Mr. Fraser, the PU chairman, who spoke the longest on Monday. At the rally, he pounded home his advocacy for his district in light of its frequent water shortages.

“When they don’t get water, you hear, ‘Fraser, Fraser.’ …What about Walwyn? What about Smith? What about Christian? What about Skelton?” he asked, naming the four at-large incumbents. “Those people … got more votes in the Third District than I did.”

Mr. Fraser also took credit for helping to clear roads and transport food and water to residents in the wake of Hurricane Irma.

“Don’t be fooled,” he said. “Every individual that lives in the Third District has a connection to me.”

Mr. Fraser will seek a fifth term as representative for the Third District, which includes Sea Cows Bay and its surroundings. He is a former chairman of the VIP, but he lost the position to Andrew Fahie (R-D1) last year following the VIP’s blistering 11-2 loss in the 2015 election.

Mr. Fahie later replaced him as opposition leader in the House of Assembly.

Mr. Fraser announced the launch of PU in August, and officially launched in mid-January with three candidates: businesswoman Stephanie Brewley for the First District, former legislator Dr. Vincent Scatliffe for the Fourth District, and former customs officer Dirk Walters for the Fifth District. At the time, he promised more to come.

At the Monday rally, Mr. Fraser went into greater detail about his proposed corporate structure for small locally owned businesses,which he said do not have the same concerns as multinational corporations.

“We are all lumped into the same category,” he said.

Earlier, Mr. Walters, then the Fifth District candidate, launched on Saturday night at the Huntums Ghut basketball court, explaining that he chose to run for office “because at this critical time our district needs a representative who is strong, courageous; who is honest, who is compassionate.”

The former customs officer vowed to hold regular office hours if elected, and in the process slammed representatives who he claimed don’t speak to their constituents for “years at a time.”

He took aim particularly at at-large representatives who he said abandoned the Fifth District after the death of its representative Delores Christopher last year.

He also addressed environmental concerns, advocating for more green energy solutions and for building “low-impact structures” to attract tourists. “Build within the context of the hillside and so forth,” he advised. “Build cottages and homes that are eco-friendly.”

Mr. Walters also spoke on behalf of senior citizens,who he said are too often “discarded and abandoned” by society.

His suggestions included a handicapped-accessible bus to help the elderly get around, and stationing a nurse practitioner in each district to oversee care
for the elderly, thereby freeing up hospital beds for critical cases.

“We will develop elderly and vulnerable assistance programmes like adult daycare —a designated area in the district where seniors can congregate safely in a supervised environment,” he promised.

“I don’t have any multimillionaire backers,” he said, “or even any rich friends.”

Stephanie Brewley, a human resources consultant who has never held political office, said that when she first proposed running for the First District seat under the Progressives United banner, she was told “wait till next time.” But she’s not waiting.

In her launch Tuesday night in Cappoons Bay, she didn’t spend much time criticising her opponent, Virgin Islands Party Chairman Andrew Fahie, who has held the district’s seat for 20 years. But Ms. Brewley, who calls herself “the brown girl in the ring,” did lay out her ideas on the table, under the acronym CET: culture, education and tourism.

West End should be a “cultural destination unto itself,” centred around fishing, food and history, she said. Historical sites, including several old-fashioned brick ovens that she said survived Hurricane Irma, need to be repaired and used,she suggested. She also proposed events, such as a fisherman’s jamboree, and a yearly competition, “Mr. and Mrs. Junior and Senior Culture,” in which groups of young people would demonstrate their skills and knowledge in some aspect of local culture.

She further underscored the concept of self-sufficiency, suggesting that District One should have its own rainy-day fund and investments, so it wouldn’t have to rely on funding from central government, which “doesn’t understand the value of a dollar,” she said.

“In District One,” she added,“We understand.”